The first SanLorenzo SD 122, a 38 metre composite semi-displacement superyacht, was completed in September 2008. Francesco Paszkowski Design is now working on the second SD 122, due for delivery in the Summer of 2009, and is also responsible for its interior. 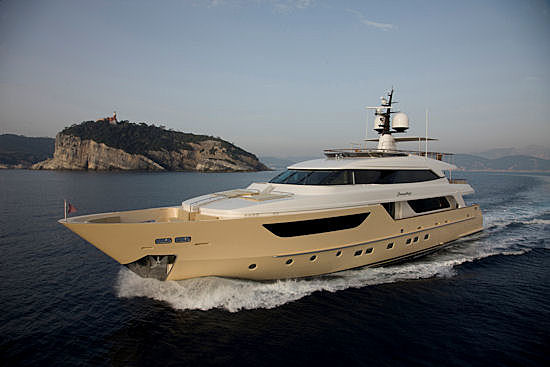 The Florence office is responsible for the general concept, external lines and layout of this new model. “The Sanlorenzo SD 122 revives the seductive elements of yesteryear, clearly evoking the early twentieth century with its exterior, which, however, seeks a dynamic relationship with the present so as to obtain a yacht that meets the needs of the twenty-first century”, says Francesco Paszkowski.

A striking feature of the exterior is its color, a shade of cream recalling the pastel tones of the sailboats of the 1950s and 60s that contrasts with the mahogany of the handrail and the teak of the decks. This allows the white superstructure to stand out, with its trapezoidal and rectangular windows on the main deck, in the owner’s suite and the living area, as well as the slightly rounded ones on the upper deck.

While there are numerous distinctive features on the exterior - a large flybridge with space for wooden chaise longues, the cascade whirlpool tub, and the windows of the sky lounge on the upper deck ending with a characteristic stripe - the interiors are notable for their sober elegance. Together with the attractive lines of the exterior, Francesco Paszkowski Design has created unadorned interiors, where according to Paszkowski “color itself becomes a design element, with the fabrics of the sofas matching the lacquered ceilings with effects of indirect light and rigorously arranged to form part of the furnishings, the stronger colors of the cushions contrasting with the warm tones of the Tanganyika walnut, and the steel used to stress the contemporary character of the furnishings in the table legs and the structures of the chairs.” 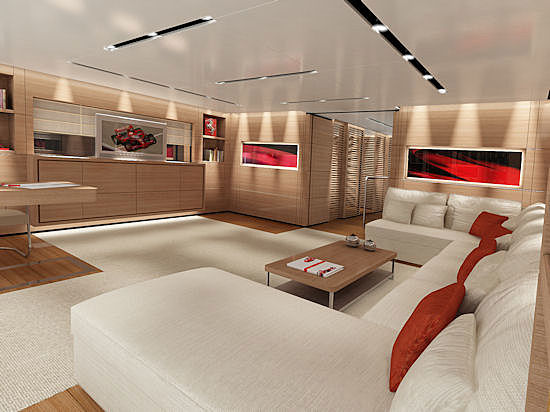 The expanses of wooden flooring consisting of large planks are interrupted here and there by white carpeting that matches the dominant color of the décor. The wood is divided into large horizontal panels on the walls and furniture, which is sometimes suspended. These features allow better lighting and make the spaces, which have been used to best advantage, seem larger.

A particularly innovative aspect of this superyacht is the layout of the upper deck, where you have a view from the helm station through the sky lounge to the sea, thanks to the central axis created from bow to stern. The layout on the main deck is traditional, with the living area and owner’s suite, which has a studio and separate bathrooms for him and her, and the VIP and guests’ cabins on the lower deck.