Following work on the yachts during Thursday’s lay day, crews were up early to prepare for a third day of racing around the coast of Falmouth. The weather was uncooperative initially with very changeable light winds, leading to a delayed start. However the winds picked up and established a more constant 5-7knots NW, creating more favourable conditions. 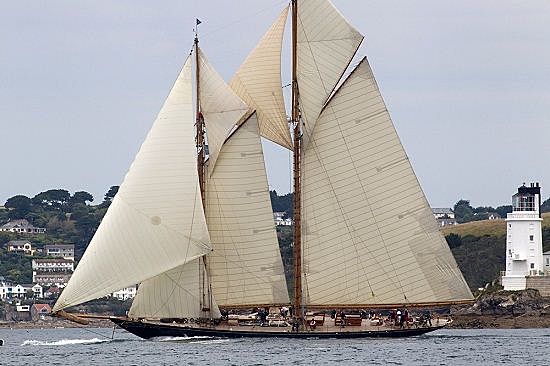 Although the lighter wind proved difficult to some it was fascinating to see the response by the fleet. Mariette was over the line first with a fantastic close haul start right on time towards St Anthony lighthouse, a line which was also followed by Velacarina. Mariquita took a southerly tack towards the coast, with Bare Necessities and Adela electing to follow this course too. After Mariette took her first tack it was obvious that Mariquita’s tactics paid off closely following her around the first ‘Burgess’ mark. 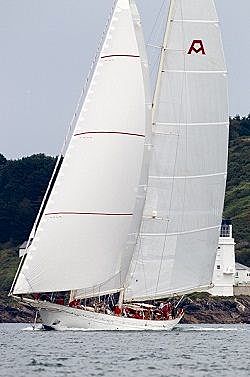 Several yachts set a reaching sail. Although Unfurled had a relatively slow start along the first beat it wasn’t long before she was storming through the field past Adela. As Mariette rounded the second mark she sent her kite flying whilst Mariquita prepped her spinnaker pole ready for the tack. The rest of the fleet was lead by Velacarina and Breakaway. It wasn’t long before Unfurled was bearing down on Bequia, picking up speed dramatically on the downwind leg. This leg provided a spectacular view of the complete fleet with spinnakers and asymmetric sails flying as they passed the entrance to the Helford. The fleet split again, some following the shore line feeding off the currents falling from the coast.

Mariquita took the most direct route, making the most of her rig, turning the next mark just 2 minutes behind Mariette.

The following group was very tight with Bequia just passing Unfurled, forging ahead of Breakaway. Unfurled had Velacarina in her sights as they rounded within 5 minutes. Another tussle was taking place at the rear of the fleet as Adela took Bare Necessities, despite having issues after her kite was launched with the bag still attached.

Meanwhile in Class 3, following a tight start, that fleet stretched out as, with kites flying, Firebrand and Tomahawk formed the leading pair. Mikado showed her prowess in the light winds, favoured by her low freeboard and cutter rig, as she passed Pinuccia and started gaining on the front pair in the downwind leg.

Firebrand and Tomahawk remained neck and neck inching between each other down this leg, but despite the light winds Mikado gracefully edged forward taking the inside line and gaining the advantage over Pinuccia. Leading up to the Helford mark it was impossible to predict which yacht in the classic Class 3 field had the advantage, but it was Tomahawk that took the buoy first. Although Firebrand nearly lost her kite to the water following her jibe, a speedy reaction by the skipper saw it swiftly recovered without giving time to Mikado. This tight battle between the first two would continue through the remainder of the course, with Tomahawk eventually taking line honours less than half a minute ahead of Firebrand. However after corrected time it was Mikado who was triumphant, but with just over 10 minutes separating the four yachts in Class 3 it had been fun to watch this little fleet fight it out. 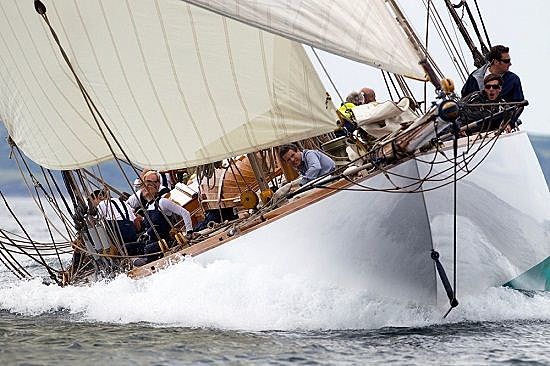 We then took the Cockwell’s tender to rejoin the Class 2 fleet. Although Mariette still maintained her advantage after the northerly Gull Rock mark, Mariquitawas still close behind with Unfurled closing on the leading pair. It was Breakaway and Bequia rounded next, with Adela trying to manoeuvre outside Velacarina at the mark. The yachts were close hauled down this final leg, leading to a series of tacks with Mariette taking the first tack closely followed by Unfurled. Unfurled and Mariette took a heading to St Anthony lighthouse whilst Mariquitastayed on starboard to Gyllyngvase beach before heading towards the finish off Pendennis Point. 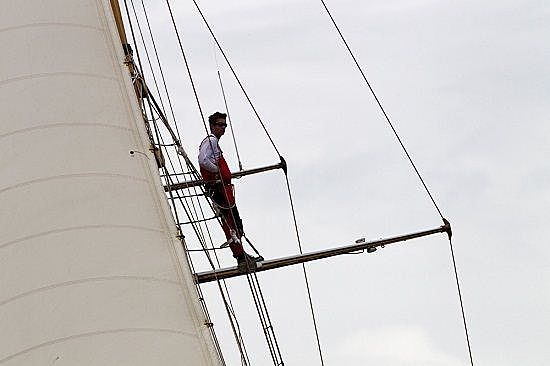 Unfurled once more showed her impressive speed taking the finish line ahead of the fleet by a clear 5 minutes, her third line honours of the week. As Mariquitatook her final tack crossing in front of Mariette the two continued their battle on a parallel course. Breakaway looked set to cross the finish line next but a late tack forced her to sail round Mariette’s stern. Mariquita held a tight line into Black Rock. She seemed to be gaining on Mariette and we all watched nervously to see if she had out-manoeuvred the 42m Schooner. As Mariette turned for her final run in, Mariquita held her line and tacked neatly just past the rock, turning into the finish line about three boat lengths ahead of Mariette. Just as we thought that Mariette had a clear final run, Breakaway performed a fantastic tack just in front of her taking the line next with Mariette crossing less than a minute later. Bequia was the next home with a risky final tack close to Black Rock to sneak in just ahead of Adela, followed by Velacarina and then Bare Necessities.

Even though the speeds were not impressive as Wednesday’s race, the tacticians certainly demonstrated their expertise in today’s race. Thoughtful manoeuvring saw all yachts aiming to capitalize on the local conditions. On each tack the fleet divided, some taking the coastal routes to maximise the offshore breezes, whilst others took the less direct route tacking across the reach with their spinnakers flying. The day saw Mikado in Class 3 and Mariquita in Class 2 come into their own, with impressive tactics by both in their relative Classes race leading to victories on corrected time.