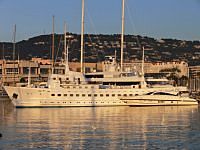 The 62m Blue Dawn arrived in the Vieux Port of Cannes just before Christmas (photo). Blue Dawn arrived from Lebanon and in July of this year she evacuated Canadians from Beirut to Cyprys. Blue Dawn will be available for charter through Yachtbrokers International.

The owner and crew of the 48.17m (158ft) stranded Perini Navi Legacy recently talked about their experiences during Hurricane Katrina in the magazine Vanity Fair. Legacy was blown into the Great White Heron National Wildlife Refuge just a few miles off Key West during the hurricane, and has not moved since, apparently she sits in just over 1m (3ft) of water.
Legacy has a draft of 3.38m (11.1ft) with her keel up.
Bureaucracy has so far prevented the yacht from being salvaged. Meanwhile the crew and owner continue to fight off nosy onlookers and occasionally even pirates..

According to Dutch magazine Quote the owners of the Heesen No Escape and the Benetti Midlandia invested in Icon Yachts and they will build the successors of their current yachts at this new Dutch shipyard.

In The Yacht Report it was rumoured that the owner of the 55.5m Feadship Twizzle will soon sign a contract with Perini Navi for his new yacht.

Giusy Blue, a mystery 61m yacht that many said never existed, really does exist! She is currently for sale through Porto Mediceo di Punta Ala Srl in Italy.
Some details: Length 60.7m, year 1974, builder Peene-Werft (Germany)

The Feadship Nobla which was owned by Gaddafi when she was Al Farah will soon be lengthened and refitted in Southampton by Ocean Quay. 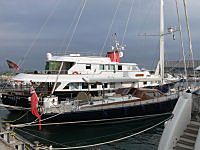 The 31m Benetti Happy Day from 1969 will come on the market soon as the owner will built a new yacht. In November she was seen at the Mondo Marine shipyard (photo).

The 90ft Burger Argus V that sustained heavy damage in 2004 during a fire, has undergone a major reft, and is looking brand new again. She should relaunch pretty soon under a new name, Elizabeth H.

If you hear a rumour or if you have other interesting information, please send it to: [email protected]