Last week we showed a video of the launch of the 54.90 metre superyachtHarbour Islandand now the shipyard has released the first photos of the superyacht. Under the glow of a full moon, Newcastle Shipyards launched Harbour Island on 11 August 2011. 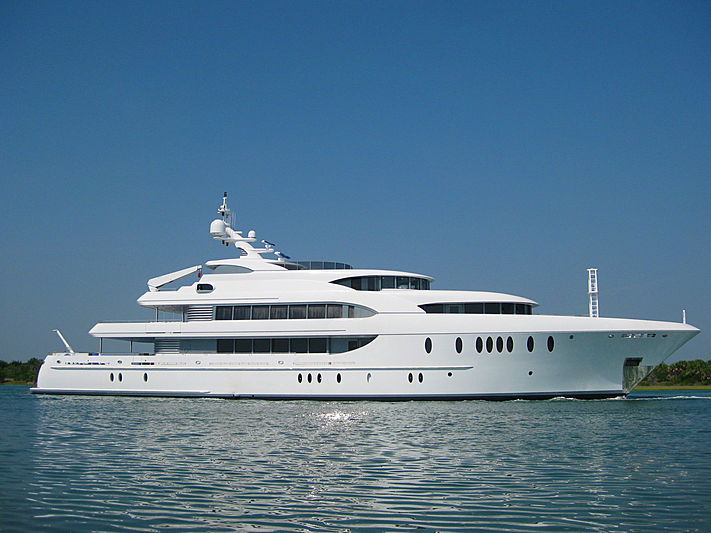 Harbour Island is the first in the Newcastle 5500 series and she will spend the next few weeks in St. Augustine for dock tests and sea trials before heading south to Rybovich Super Yacht Marina and Refit.

The Newcastle 5500 is a six-stateroom custom yacht featuring two king master suites - main deck and skylounge deck forward- and a VIP king guest suite below. Additional amenities include the infinity pool on the split-level sundeck, the raised “veranda” on the main aft deck and expansive built-in seating area aft of the alfresco dining on the skylounge aft deck. Tenders and toys are stowed in the stern garage leaving the spacious exterior decks uncluttered. The Newcastle 5500 is built to ABS Maltese Cross A1 YS, AMS, is MCA compliant and has trans-Pacific range.

Kevin Keith, owner of Newcastle states, “We are excited to see our largest yacht to date near completion. Harbour Island begins a new chapter in the history of Newcastle Shipyards as we look to build superior yachts for the most discerning owners.”

Harbour Island will make her world debut at the Fort Lauderdale International Boat Show in October and she is offered for sale through International Yacht Collection.