Home > News > Galassi: the man at the helm of The Ferretti Group

Over the past few years, the Ferretti Group has undergone a complete structural overhaul. One of the most important Groups in the superyacht industry, amongst the most significant changes occurred first in 2012, when the Chinese manufacturing company, the Weichai Group, acquired the Italian business. This was followed by a series of new appointments at the top, including that of Alberto Galassi, a man who, up until the announcement of his new position as CEO of the Ferretti Group in mid-2014, had only enjoyed the pure pleasure of superyachting as an owner himself. 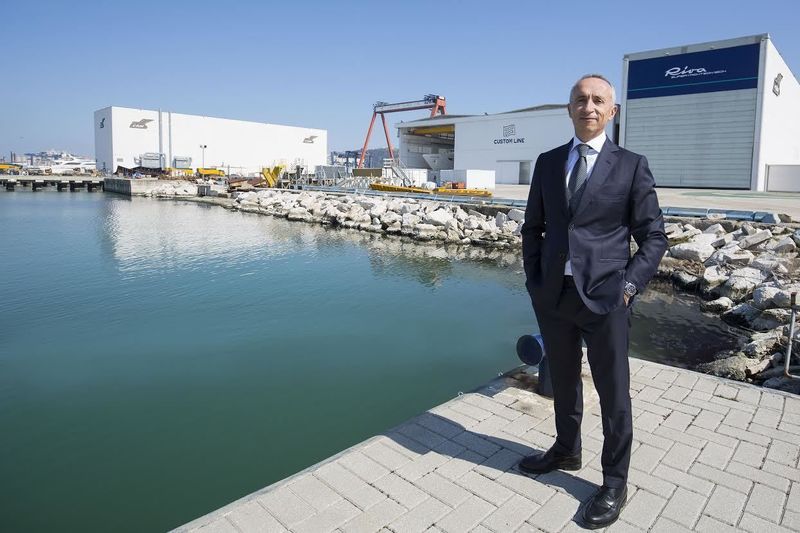 Two years down the line, and Galassi and his team have continuously taken the Ferretti Group from strength to strength, heavily investing in research and development and ensuring that all the brands under the Ferretti Group’s umbrella (Pershing, Ferretti Yachts, Itama, Riva, Mochi Craft, Custom Line and CRN), are absolutely synonymous with the Made in Italy taste and style at the brand’s core. We met with Galassi on board CRN’s most impressive superyacht to date, the brand new 74-metre Cloud 9, who shared a candid insight into the life of the man at the helm.

Although you had never worked within the superyacht business before joining the Ferretti Group, you bring a wealth of experience to the company as an owner yourself. What does this bring to your role?

I bring a different perspective to the Ferretti Group - the owner’s perspective. I know the significance of aspects of the business such as customer satisfaction, quality, service and aftersales, and what effect these aspects can have on a client’s experience. From my owner’s perspective, I also know that I truly hated it when shipyards lied to me on the delivery dates, for example. Now, in my position, I prioritise facing reality and presenting that reality to the client.

Is an honest approach a unique thing in this business?

No… I’m just saying that you need to be honest, and if something goes wrong, you need to put your hands up and say, “We’ve made a mistake.” You should not hide it. If you put yourselves in the client’s shoes, you can see that what is a small delay for you as a shipbuilder may be 50% of the cruising season for the client. That needs to be addressed and the frustration needs to be solved. This philosophy really drives the Ferretti Group today.

You took delivery of the first Navetta 33 this summer, again wearing both the owner and the shipyard hat. How does that influence your experience as an owner?

Well, the bad news for me is that even though I took delivery of my new yacht, my role at the Ferretti Group means that I have very little time to spend on board. The good news? My family has the time! But it does change my experience as the owner. I spent 10 days on board the Navetta 33 this summer - I was the chief test pilot. I wanted to make sure the yacht was right when we launched the model into the market and took her to Cannes. She is certainly right and a great success, but it was not a holiday. It was focusing on the details, discussing what is going to be better on the second hull, the third hull - it’s a constant improvement, but I really enjoy it.

Piero Ferrari is the father of your wife, Antonella Ferrari, as well as on the board of Directors at the Ferretti Group, holding shares of around 13% of the company. Can you tell us about the involvement of Mr Ferrari in the Ferretti Group?

I’ve known Piero Ferrari since 1984 and forget about the personal relationship I have with him - he is a fantastically talented man. He’s been driving a lot of the new Ferrari designs over the past 20 years and has this optical advantage of seeing something in the style or the design that no one else can spot. In terms of the Ferretti Group’s style, a lot of our style comes from him. The lines are very clean in the new Ferretti Group, and more balanced. He gave us some important credibility at the beginning of this venture when he joined as a shareholder. Now the turnaround is finished, the Group is once again profitable and going from strength to strength.

How involved is Mr Ferrari in the design process at the Ferretti Group?

He can be very involved - and he certainly challenges the team! For example, he will call at midnight and say, "Alberto. I thought about that design. We need to change it." Half asleep, I say, "What? It’s too late to change!’" He says, "No, no. Think about it, sleep well, talk to me tomorrow.” So I go to sleep, I talk to the team the next day, they say it’s impossible, we call the designer, he says it’s impossible. At the end of this process, we all realise - Mr Ferrari was right. And we do the impossible and implement his advice into the design. The designers listen to him; they respect him. They know that he’s not just an egomaniac who wants to give his advice because he is Vice Chairman and a shareholder. With Mr Ferrari on the board of Directors, can we expect a deeper involvement with any of the Ferretti Group brands and Ferrari?

None of us is pushing to do something that doesn’t make perfect sense. So, will there ever be anything more than what is right now between Ferrari and the Ferretti Group? Probably, but when the right time comes. From a marketing perspective, we are already strictly connected with the Scuderia Ferrari, having the Riva brand proudly displayed on both Ferrari drivers’ helmets. Riva is proud to be one of the Scuderia Ferrari official sponsors. This union perfectly represents the style and high technology made in Italy around the world, both on the racing circuit and on the sea.

When you were announced as the new CEO, the Ferretti Group announced this move as part of securing the brand in international markets as true ambassadors of Made in Italy. What does Made in Italy mean to you?

Thinking Italian… manufacturing with passion, artisan craftsmanship, taste and beauty. We are not perfect, and we can make mistakes in Italy as everyone knows, but we always try our very best, putting our hearts and souls into everything we do. We do not compromise on taste, we do not compromise on feeling, perception, quality. We are definitely not famous for being perfect, but we’re certainly famous for being beautiful.

The Weichai Group are the majority shareholders of the Ferretti Group. Can you tell us more about their involvement?

Weichai gave the Ferretti Group credibility when we did not have it. They gave us financial resources, and they gave us time. If I have to judge Weichai as a shareholder, they are unbelievable. They patiently waited for the turnaround to happen - they are not speculators, they are industrialists. They have pushed me to invest in R&D and we now spend €30 million every year on R&D - a big number in this business.

Aside from financial investment, does having an Asian shareholder hold any weight when it comes to expanding into the Asian market?

Weichai has 70 years of history, so when people ask why these Italians are trying to sell this boat in China? Well, they have Weichai backing them. It really helped a lot with Asian sales. The Ferretti Group is divided into three sections: 53% is Europe, the Middle East and Africa, 28% is the Americas, and 19% is Asia. In Asia, we are growing, but you have to remember that there is a yachting tradition in Europe and the Middle East. We have the infrastructure and we have the culture - this will not happen in Asia. But even if they represent 10 - 20% of a Group which has revenues of €600 million, then that’s significant.

Bringing it back to where we are right now, on board CRN’s brand new Cloud 9, you have previously stated that the construction of this yacht was a ‘new and exciting challenge’. What were the main challenges?

Oh, I can tell you! I started in May 2014, and within three days I signed this deal with the owner. So it was really, fasten your seatbelt and have a good ride! The lucky news for me is that the CRN team are just fantastic. They’re great people - it’s no coincidence that they are quickly becoming the most important brand within the Ferretti Group.

I truly think Cloud 9 is the best CRN so far - by far. The quality is fantastic, and the feedback from the owner as well as the competition is great. The owner was very involved with the project and was a particularly demanding client. He was supposed to be on board one week when she was delivered - it turned into three months. She’s practically his home now! 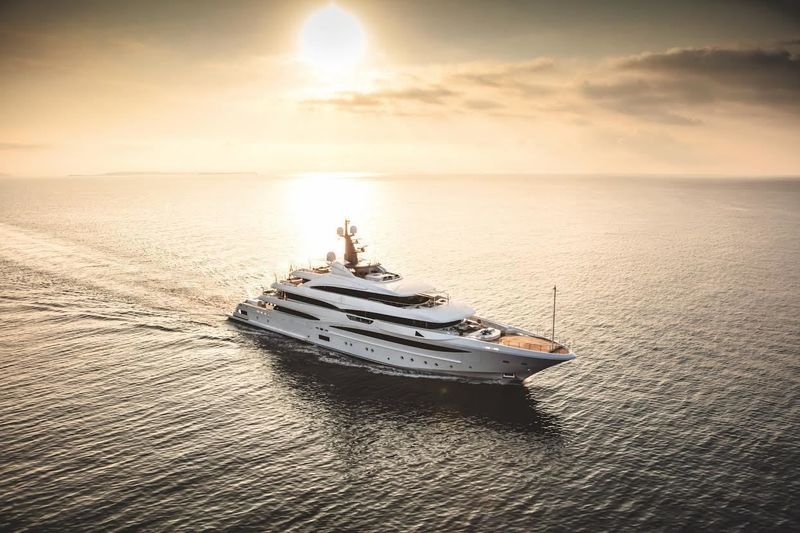 Taking it to the future of the superyacht business, more and more companies are developing smart digital strategies to promote themselves and the wider industry. What’s your stance on developing into the digital world?

I’ll be honest. When I started at the Ferretti Group, I did not believe in digital growth. I did not believe that this business could benefit from digital growth, and I did not think that the clients of the superyacht industry were interested in these new ways of communication. Let me tell you - I was wrong. Damn wrong. The Ferretti Group have over 100,000 followers on Instagram. We sold a boat to a guy who saw the yacht on Instagram. When someone told me this, I looked at them and said, ‘You’re kidding me, right?’ He wasn’t kidding. 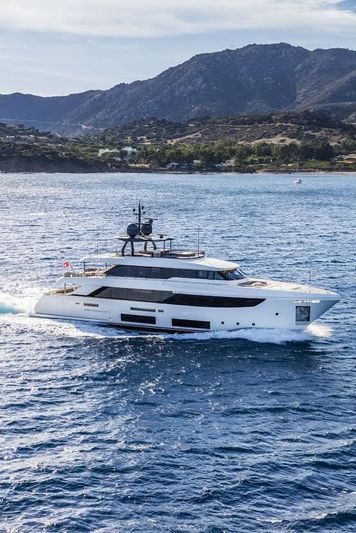 For those that argue that this is a one-off sale and that the vast majority of current and potential clients do not desire a superyacht presence in the digital world, what would you say?

Digital growth will help us as a business to communicate a message that many people see as just for the very few at the top. We should not be snobbish here, we should be realistic. Of course, we know that only a few people in the world can afford a yacht, but should we stop thousands of people from dreaming and aspiring? Ferrari is a good example. Not many people can afford a Ferrari, but the fan base of Ferrari is incredible. How many people have a Ferrari as a screensaver, for example? Yachting should be the same.

We should be more in touch with the real world, and the real world is made up of millions of people who should see this business, not as a snobbish elite, but a sophisticated industry that is constructing beauty, building dreams, with a lot of work and sacrifice. Even me personally, I will never be able to afford a 74-metre CRN new build, but I sure as hell can have it as the wallpaper on my phone. We will also stop the prejudice against this business - which we definitely face, and even from governments at times. It’s a serious business that helps economies. The bigger the fan base, the better for everyone.

This article was featured in the latest edition of the SuperYacht Times newspaper. Subscribe now to receive your copy straight to your door and never miss another issue!