Anil Thadani is never short of a good anecdote. Driven by a childhood fascination for boats - as well as cars - his yachting journey began with a Johnson 55 (no less than the first private pleasure boat used in Phuket) well before any infrastructure was put into place in the region, and has continued with him owning numerous boats into the present day, culminating with his crowning glory: the 2008-built, 46.5-metre Latitude. A yacht that has, undoubtedly, amassed a wealth of amazing stories for Thadani and his family. In our chat with Mr Thadani, we learn more about the burgeoning Asian market, why the Arctic might be the place to visit (for polar bear lovers at least), and his future exploration plans on his beloved superyacht, with family in tow, of course. 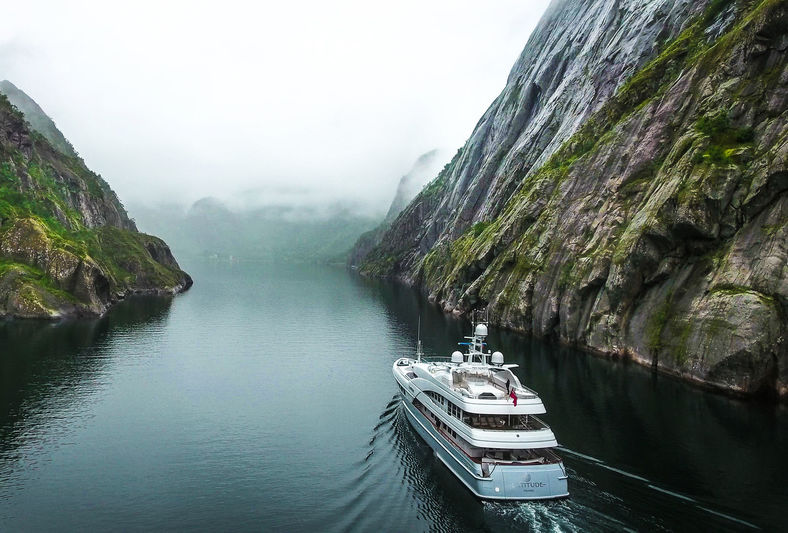 Photo: Shelton du PreezAs is often the case with superyacht owners, Anil’s journey to world-cruising on board Latitude began on a much smaller scale. A Johnson 55, a seriously speedy and  - as the man himself states - slightly dodgy Riva 2000, and an outboard motor boat with a shallow draft for cruising Phuket’s waters, designed and built by an Australian friend and given the name Blowfish by Thadani’s daughter. “We bought Blowfish in the early 1990s and I still have that boat. I usually would have junked it, but I couldn’t because of the emotional attachment. I was on it with my family when the tsunami happened and it saved our lives.” From there, it was a 48-foot Imago boat, three Pershings of various sizes up to the Pershing 92, until it was time for something different. “By the time I had used the Pershing 92, both in Europe and Asia, the boat bug was truly ingrained, and so I decided to look for something bigger. My wife didn’t care much for the Pershing yacht: it was too fast for her, but my kids liked it!”

Upscaling came with its own set of challenges and Thadani inspected a total of 27 yachts before he settled on Latitude. “I wanted a boat that was in my budget. I didn’t want to wait three years to build a new one, but I didn’t want to buy an old boat either. I wanted a boat of around three years old... not too old and built well.” Not too new, not too old, built well and within budget. After receiving a tip-off, it was at the tail-end of the Monaco Yacht Show where Thadani finally found his Goldilocks boat: it was just right. “The first time I saw Latitude was offshore - she was going to the States and about to do a passage across the Atlantic. I walked onto the boat, and within 30 minutes I knew I wanted her.” 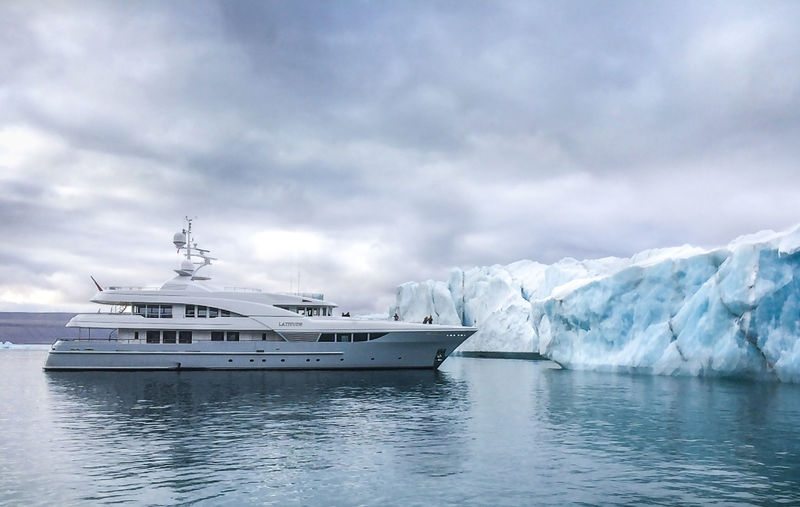 Photo: Shelton du PreezFor Thadani, build quality was definitively ticked off the list with Latitude. “I’m an engineer by training so I kind of have a feel for the quality of the build. It’s not an icebreaker, but it feels like one and she’s very solid. She’s a custom yacht, and I could really see that the guy who built it did so for himself, and when you build for yourself, you do it right. I noticed the little things, like that the hinges on the doors were really over-specced: very nice hinges!” Scaling back, Latitude’s layout also appealed. “There is a day head at every level which I thought would be really convenient, and a huge sundeck for a 46-metre boat: I thought the sundeck would be nice for Phuket, although it’s not been to Phuket yet.”

Having worked in the Asia Pacific Region since 1975 and founding one of the first private equity investment companies in Asia in 1981, Thadani has witnessed the growth of the Asian superyacht industry first hand. "The desire is there. There are such amazing cruising areas in Asia like Vietnam, Cambodia, Thailand, Malaysia and the Philippines. Asians are 10 years behind in adopting the boating culture, but the infrastructure is coming now, especially in Phuket.” 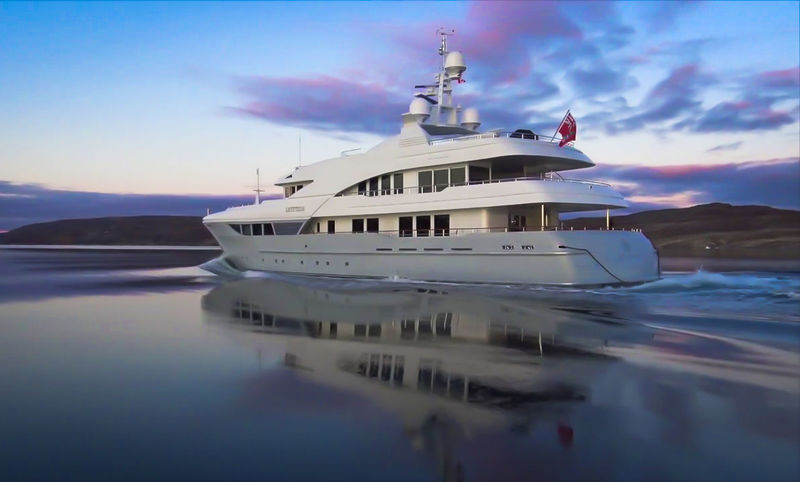 Photo: Shelton du PreezAlthough much of Thadani’s early boating was focused around these Asian cruising destinations alongside yachting hotspots like Italy and the French Riviera, with Latitude, it was time to try something different. After a thwarted attempt to visit Cuba, thanks to a somewhat off-putting email from US Homeland Security stating that he should “Please be aware that US forces will not help you out if you’re there”, it was time for plan B. As Thadani explains, “My captain said to me, ‘Look at the map and tell me where you want to go.’ I looked at the passage above the top of Canada and he told me, ‘That’s the Northwest Passage, people have been trying to get through there for years.’ I said, “Well, is it possible?”

Three months later, with all her guests and crewmembers equipped with second hand Mustang survival suits bought off eBay - “you’re talking $2000 for new ones, and $500 on eBay: it’s a no-brainer!” - Latitude began her first trip up North. In an outcome best described as one of life’s sharpest double-edged swords, a major factor which made the impossible trip possible for nature-advocate Thadani was the effects of man-made global warming opening up the passage. As Thadani puts it, “One area that this industry needs to improve upon is environmentalism. I'm now not particularly keen on fleets of boats going through the Arctic. It's in my memory, and, somewhat selfishly, I almost don't want anyone else to do it, as it will be damaging to the area. Many boats are doing it now after reading our stories - we were quite open about the trip on social media.” 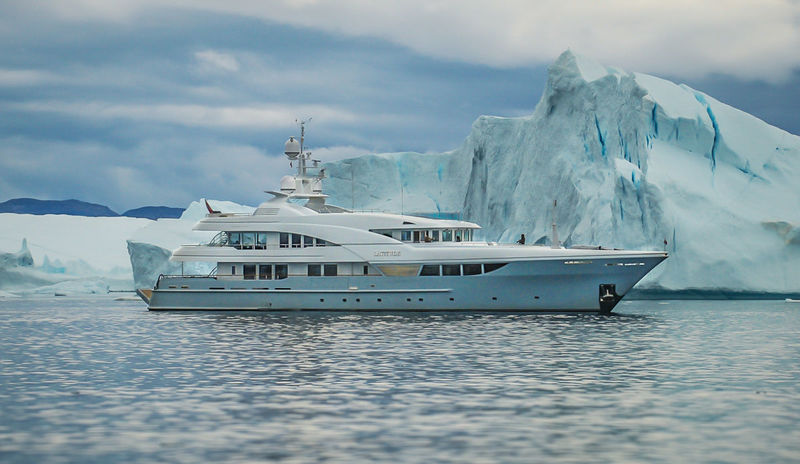 Photo: Shelton du PreezAnd what stories they are - it’s certainly not difficult to see why others want to follow suit. “We took a hike on a glacier in Svalbard and we had two polar bears follow us. We had to fire a flare with a loud noise and it worked out okay. We had to abandon our plans for a BBQ on the edge of the water though!” Sharing such exploration stories is natural for Thadani (“What’s to hide? If you have done something special, then why not share this with the world?”), as is actually using the boat you’ve spent money on. “I think if you can’t spend like three or four months on your superyacht, then you should just sell it,” he comments.

Following a recent major refit after three years of Arctic exploration, selling Latitude is certainly not on the cards for this owner. “We’ll probably keep the boat in the Indian ocean for the next two years, bring her to Sri Lanka or the Maldives, Vietnam, Micronesia and sorts, and after a couple of years I’ll take her back up North again, and maybe we’ll take her to Antarctica.” Wherever Latitude ends up, we can rest assured that Thadani will come back with plenty of tales to tell.