What a great final day to the 2012 Oyster Regatta in Cowes, a week short of sun but full of fine sailing, and with no clear overall winners as yet in either of the two classes, everything hung on this last, fourth race, with the discard the final decider. After the light breeze of the previous day the wind was up and the fleet was in for an exciting, close contest with, in Class 2, just two minutes separating the first four finishers, while in Class 1, conditions gave the big boats the edge and the middle fleet a fine fight. 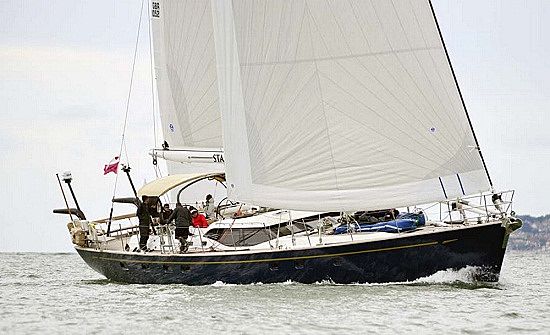 While the foul tide beat ruled the first three races, today the tactical call was over downwind or white sails and wardrobe around the course. A 25 knot WSW on the west start line made decisions borderline and the fleet went unanimously white sails. Perhaps in the end some could have carried downwind sails but the balance of beats and three-quarter reaches probably wouldn’t have gained the necessary three per cent advantage. But then if you couldn’t pole out you lost out. The call was also on balance in the sail plan, the cutter rig adding to the mix with the benefits of the staysail on certain wind angles.

Class 2 got away with an exciting start coming in on starboard toward the beach, then the three leaders tacked onto port but another coming down on starboard put them all about again back toward the shore. Tension was up, this was sailing Oysters, dinghy fashion which carried on to the finish with Aidan Millerick’s Oyster 46 Astraeus da Luz first across the line followed rapidly by Simon Timm’s Oyster 53 Nutcracker and Bert Janssen’s Oyster SJ41 Prince de Petarcq, these two within feet and four seconds of each other, and then Clifford Sturt’s Oyster 53 Spirit of Epsilon, all four within just two minutes.

The race on corrected was won though with a great recovery from an earlier stalled Sundancer of Chichester, John Nelson’s and Phillip Reisco’s Oyster 42, which played a flanker on the final beat hitting distance from shore just right for best tide and wind speed to win not just the race but turn the overall results upside down and take a well earned podium place. 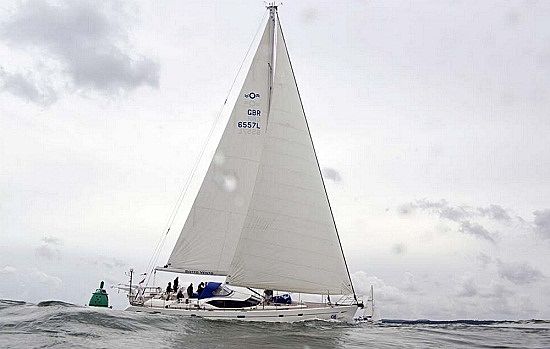 Class 1 also gave a cracking first beat straight from the gun after another high tension start with the two Oyster 82s in a starboard tussle right on the line and gun, and then a stunning pull away by Anthony Galley’s Bare Necessities rounding the windward mark a full one minute and 20 seconds ahead. Wardrobe choice was bang on, double-headed and power full on over Starry Night of the Caribbean’s staysail only. By mark three though tables turned on the reach and then poled out run, Starry Night, with race trained crew, romping away to finish five minutes ahead over the two-and-a-quarter hour course. To see these big boats perform in these winds this way was a treat, and aboard Bare Necessities there was a buzz, this is only the third week’s racing in the boat’s full eight years.

Behind the front breakaways, with just staysail for the first beat, Charles and Nicky Manby’s new Oyster 575 Isis was taken by Andrew and Ann Walter’s Oyster 56 Asante, which went on to third over Isis’ fourth. As Charles says, “The racing was very good, some days you do well, others not so well.” And for perspective, this just out of the box, distinctive grey liveried 575 has in this single regatta actually doubled its mileage under sail since new. From Asante, Andrew, who has sailed more than 20,000 miles on his Oyster 56, questioned his own sail choice, too, “Our mistake was going all the way round with a reef then shaking it out only towards the end of the downwind leg, and then regretting it back on the beat.”

Royal Yacht Squadron PRO Simon Van der Byl commented, “Tide today at the start was soft and at the end of west-going, and I wanted to get everyone into the east as the sea would be down even if the wind was up, which it was. It seemed to work.” It did, the course like all this week was well set and liked, as too has been the mood of the event, described by owners variously as “gentle people’s racing”, really rather a good line, and “a terrific way to let the boat go, and these boats really do go” to “a great mix of social and sailing”, a point exemplified well by not only the friendliness on the pontoon but by the evening events which concluded with the prize giving dinner in the Royal Yacht Squadron’s fine pavilion overlooking a perfect panorama made unique that night by the sail past of the Cunard’s three Queens, Mary II, Victoria and Elizabeth, steaming through the Solent in a never previously seen flotilla. That takes some beating.

Of course those who did the beating on the water picked up their prizes and fine trophies for the days’ Pelagos Yacht sponsored race, and the regatta overall. “Class 1,” announced David Tydeman, CEO of Oyster Marine, “has been very exciting, with just 1.75 points separating the first three boats overall…and it was all about this last day.” 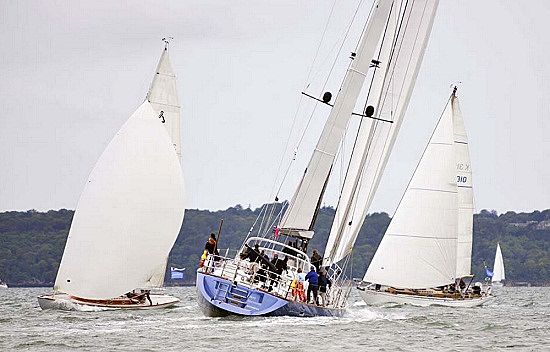 Starry Night needed to win this race to take first overall, and she did, the event was hers. Second was Andrew and Ann Walter’s Asante, third Charles and Nicky Manby’s Isis, and fourth Richard Smith’s Sotto Vento.

In Class 2 where the first four boats all changed places with their discard except Prince de Petarcq, which has been consistently in the lead, David Tydeman said, “We saw a real shuffle of places two, three and four in the last race. It’s been very, very close.”

The Concours d’Elegance awards, presented by the Royal Yacht Squadron, went to David and Linda Pedley’s Oyster 435 Parton and Mike Freeman’s Oyster 46 Can Do in Class 2 and to the Oyster 82 Starry Night and Charles and Nicky Manby’s Oyster 575 Isis in Class 1.

Start of the Week went to one who, with kite up on a downwind start, more accurately missed the line but unfortunately not the mark, Clifford Sturt’s Oyster 53 Spirit of Epsilon.

Best-dressed crew went to Mike Freeman’s team on the Oyster 46 Can Do.

Spirit of the Regatta went to Jon Suller and his mostly novice crew aboard his Oyster 55 Boysterous who, after sailing all the way from the Clyde specifically to take part, are sailing straight back after the regatta.

In mind of the Olympics starting in just a few days time, a special ‘Tom Daley’ award was also presented to Paul Fletcher of Oyster 56 Dreams Come True who, courtesy of a wayward genoa sheet took an Olympian high dive, otherwise known as Man Overboard!

So, an event made good, despite challenging weather, by truly great racing and a wonderful range of competitors from novice to grand prix and pre-teen to octogenarian. Not many events offer that! And of the racing itself, David Tydeman CEO of Oyster Marine rounds it up well, “The best thing in this return to Cowes is that results are so close, so it seems we have the balance of courses and handicap now. Any regatta that’s down to the last race has got it right.” The good cheer around the last night celebrations suggested the same.

The next Oyster Regatta, with over 25 Oysters already entered, will be held in Palma de Mallorca from 26 - 29 September 2012.