Gresham Yacht Design has announced an 87 metre new build. I talked with a spokesperson for the designer earlier this week, who confirmed the contract for the construction has been placed with Yachtley. 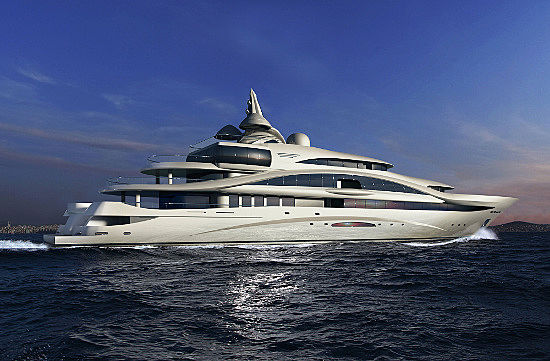 The owner provided a list of requirements for the yacht, with guest accommodation at the top of the list. The saloon will be full width amidships on the upper deck, and so the full beam of the yacht can be exploited and further expanded by the balconies port and starboard for exterior deck space. A 'Viewing Lounge' on the aft bridge deck is cantilevered and overhangs the side of the yacht with full height windows giving an uninterrupted panoramic sea views.

The yacht has a single flowing line from the bow to aft deck, a design feature which holds the visual balance of the yacht together. She displays many original ideas incorporated into the design, including the combined Cone shaped Radar/TV Domes which Gresham calls the 'Scantenna Pods' to the balconies. In addition, the MES lifesaving system is also incorporated, which is unusual for a yacht this size and negates the need for external life rafts.

Naval architecture will be undertaken by Alpha Marine, and the vessel will be built by the Yachtley Shipyard in Izmit, Turkey. She will have a maximum speed of 18 knots, and approximately 3000 GRT.