Gulf Craft Inc, the Middle East’s largest boat and yacht manufacturer, is celebrating its most successful Dubai International Boat Show to date having achieved record sales of $20 million during the five day event along with deals worth at least that much again currently under negotiation. 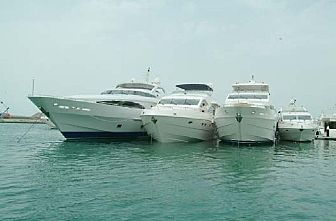 “The Dubai International Boat Show is always a landmark event for Gulf Craft and a highlight in the maritime calendar. This year was no exception as we saw again an increase in sales and visitors to the Gulf Craft stands.”

“Particularly significant was the degree of interest from Kuwaiti, Saudi and also European customers – both individuals and dealers. Smaller yachts like our Majesty 44, Majesty 50 and Majesty 56 as well as our super yacht division ,with in particular the newly released Majesty 101, have received major attention and there is every prospect of significantly expanding our presence in new parts of Europe,” said Erwin Bamps, Executive Manager, Gulf Craft.

Gulf Craft is one of a handful of specialist yacht builders worldwide with the skills and capacity to produce vessels of more than 100 feet in overall length, and already exports more than 70 per cent of its annual production of 700 vessels.

Another highlight for the local company was the unveiling of two new craft in its luxury Majesty Yacht range – the Majesty 101 and the Majesty 56. Both were well received among visitors with 9 orders for the yachts already placed during the exhibition.

“Among the most popular models at this year’s Boat Show was the luxurious Majesty 101. This reflects our growth and strength in the semi customized super yacht market for which we have a significant market share,” continued Erwin Bamps.

Gulf Craft was once again the most prominent exhibitor at DIBS, exhibiting a total of 13 boats in the water and another 8 models on land during the show. An increase of 5 vessels from last year’s exhibition, represents the company’s growing market share and continued commitment to servicing the maritime needs of the Middle East.