Gulf Craft, the region’s largest and internationally renowned boat manufacturer has announced its participation at the fifth Beirut International Boat and Super Yacht Show which will get underway from 19th May. During the five day show, marine enthusiasts will be able to experience Gulf Craft’s signature luxury yacht – the Majesty 88 through its dealer, Gulf Marine Services.

“Lebanon represents a key market for Gulf Craft as the Lebanese leisure marine market is rapidly evolving. Indications are that this market has substantial scope for sustained growth. As one of the Eastern Mediterranean’s most inviting tourist destination, there is great potential for the development of the leisure marine market in Lebanon. The Beirut Boat Show is an ideal opportunity for us to broaden our reach and tap into this growing market by showcasing the quality of manufacturing, design and finishing of our crafts,” said Nasser Alshaali, CEO, Gulf Craft. 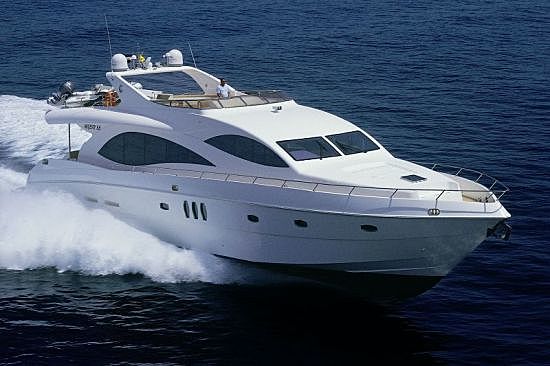 Launched in 2006, the Majesty 88 has remained one of Gulf Craft’s most popular yachts, and represents the company’s position as one of the leading players in the semi-custom yacht manufacturing segment. While the craft maintains its superb sea-handling capabilities, luxurious interior and wealth of features including a Jacuzzi on the flybridge, further advances have been made to the entertainment package to keep apace of the fast moving developments in audio and visual technology.

Showcasing its versatility and determination to remain at the cutting-edge of marine technology, Gulf Craft’s Majesty 88 is now also available with a water-jet propulsion system. Recently installed by Gulf Craft for the first time on any leisure yacht of this size built in the in Middle East and South Asia, the Rolls Royce KAMEWA water jets are driven by two powerful CAT 32 engines that literally ‘push’ the craft swiftly through the water. Rigorous tests have also proven that the yacht is more fuel-efficient than traditional propeller driven models.

This year Gulf Craft marks the tenth year anniversary of the region’s superyacht building industry. Within a decade, Gulf Craft has delivered 18 superyachts, exceeding 100ft, to four continents - an achievement that makes Gulf Craft one of the most successful builders in the exclusive superyacht market.

Established in 1982 in Ajman, Gulf Craft has grown midst the region’s fast commercial and industrial development, and has carried a pioneering role as an indigenous company that is capable of producing world class products and exporting them globally from the UAE. Gulf Craft will be exhibiting at stand D103a at La Marina Joseph Khoury.