Gulf Craft, has announced the first sale of a Majesty 88 as a result of its major presence at the Singapore Yacht Show. As part of a targeted marketing initiative, Gulf Craft is currently engaged in a 6-week ‘road tour’ of the region, showcasing two fly-bridge yacht models – the best selling family and charter model – the Majesty 56, and the magnificent Majesty 88, a shining example of Gulf Craft’s superyacht range. 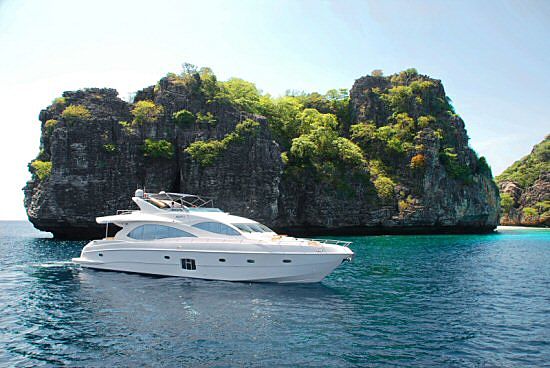 Both yachts are currently at Phuket in Thailand, where a hand-picked group of influential international journalists have been invited aboard. They will be reporting on the fit-out and performance of the yachts whilst also enjoying clear seas and magnificent beaches, and will also hear Gulf Craft’s vision of the future of South East Asia and the Middle East as a consolidated cruising destination.

Gulf Craft is organising a cocktail party on Friday evening, 22nd April, in the Royal Phuket Marina. Co-organising Gulf Craft’s local dealer Tony Nixey from Go Boating (Thailand) will be on hand to help the guests with any enquires about the yachts, or the area itself. From there, both yachts will make their way to Penang in Malaysia, and then on to Singapore, for further Boat Shows and press events.

“We have identified the emerging markets of South East Asia as having huge potential for luxury yachting,” explained Gulf Craft’s Chief Operating Officer, Erwin Bamps. “Not only are we seeing a new generation of dynamic and wealthy business people looking for quality lifestyles, the entire area is now gradually opening up for marine tourism. It is becoming more and more feasible and attractive for an owner to keep and cruise a luxury yacht in SE-Asia.”