Gulf Craft, is once again proving to be a pioneer in the Asian yachting industry, following the address from Erwin Bamps, COO of Gulf Craft, given on the first day of the 3rd Asia Superyacht Conference on Thursday 7th April. The topic of The Middle East and South East Asia – developing an interlinked superyachting industry, highlighted Gulf Craft’s vision of an emergence of a third large yachting destination globally, after the Mediterranean and the Caribbean, defined by the yachting grounds connecting the Middle East and SE-Asia cruising destinations, for tourists from outside the region, and also for yacht owners and charter operators based within the region. 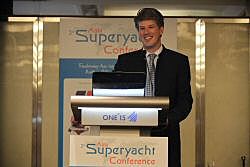 As one of the few luxury yacht and boat builders based in the Orient, Gulf Craft have supplied boats to Asia for the past 20 years, and experience a similar client requirement list both in the Middle East and Asia, with both regions still being emerging markets for Superyacht ownership and operation.

The presentation was warmly received, as key industry figures acknowledged UAE based Gulf Craft as perfectly positioned on the edge of Asia and the steady growth of Gulf Craft’s presence in the SE-Asia market. The Majesty Yachts range of fly-bridge motor yachts emphasises this as the range has been developed and expanded over the years and Gulf Craft now feel it is an opportune time to introduce this premium range to the region while the local appetite for luxury yachts is growing hand in hand with ambitious investments in marine infrastructure and services; especially now that it is becoming more and more feasible and attractive to keep and operate luxury yachts in SE-Asia.

Gulf Craft is currently on a 6 week tour of the SE-Asia region to promote intensively the Majesty Yachts range, which has only been receiving limited visibility on these waters so far, with a noted passing through of the Majesty 130 in 2007 on its maiden voyage from the Gulf to the East Coast of Australia. Showing their commitment and investment in the region, Gulf Craft participated in the Singapore Yacht Show from 8 – 10 April, and later headed to Phuket in Thailand and Penang in Malaysia with the Majesty 88 and Majesty 56, before returning to Singapore for Boat Asia on 12 – 15 May.

Furthermore, as part of their continuing strong-hold in Asia, Gulf Craft announced their new membership of the Superyacht Singapore Association. Through the membership Gulf Craft are further confirming their commitment to the Asia region and increasing their local presence and support for the ever-growing Asian yachting industry. The Superyacht Singapore Association (SSA) is a non-profit association formed in 2007 with the prime objective of ‘promoting Singapore as a superyacht destination and a hub to create economic value for Singapore in the superyacht industry.’

Gulf Craft have been accepted as members due to their proven track record of reliably delivering luxury motor yachts in the region, and future plans to further expand in this key yachting market. Speaking about the new membership of the SSA, Erwin Bamps commented; “Becoming part of this association underlines Gulf Craft’s intentions to support the Asian yachting industry from within. As members we are looking forward to greater representation in the superyacht industry in Singapore, the Asia region and worldwide. Via participation in various SSA working committees, we hope to be involved in the processes to influence and be at the cutting edge of development in the sector.”

The significant presence of Gulf Craft in Asia has already been recognised through their nomination in the Asia Boating Awards 2011 for the ‘Best Asian Motor Yacht Builder 81ft and Up’, where the winner will be announced at Hong Kong Boat Show in early May.