On saturday Gulf Craft officially unveiled their latest, and largest superyacht, the Majesty 155, at an exclusive event at the shipyard in Umm Al Quwain. The event was held under the patronage of His Highness Sheikh Saud bin Rashid Al Mu'allah, member of the Supreme Council of the UAE and Ruler of Umm Al Quwain. SuperYachtTimes.com attended the event, and had the opportunity to visit the yacht. 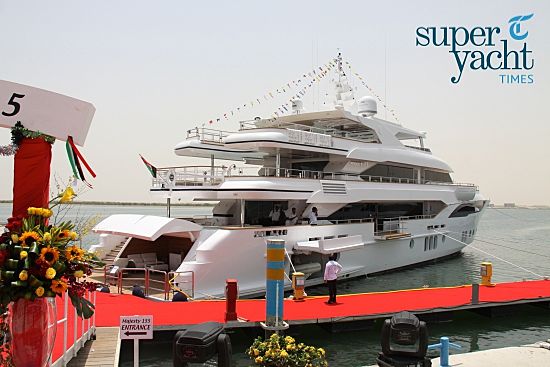 The yacht's Middle Eastern owner opted for a elaborate and sophisticated interior, using only premium fabrics and leathers, and precious materials such as red and green onyx and Botticino royal marble, Cappuccino onyx and CremaMarfil marbles. 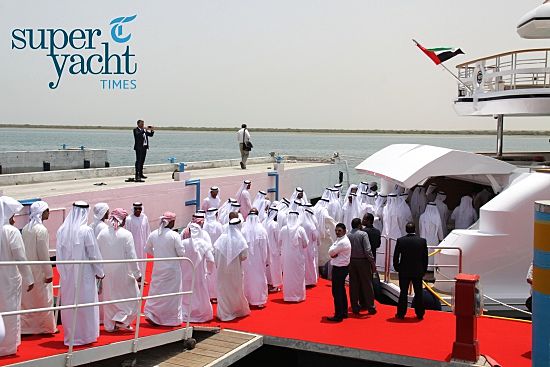 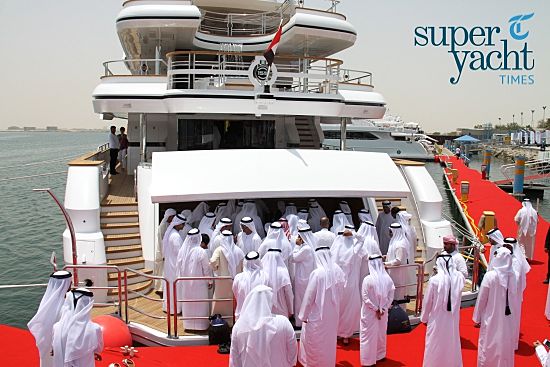 Other exotic materials used on the interior include backlit cigar leaves, used in the ceiling of the yacht's cigar lounge, which was modelled after the owner's cigar lounge in his palace. 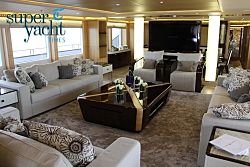 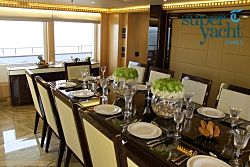 Three of the yacht's decks are accessible by her guest elevator, supplied by leading Dutch company Lift Emotion. 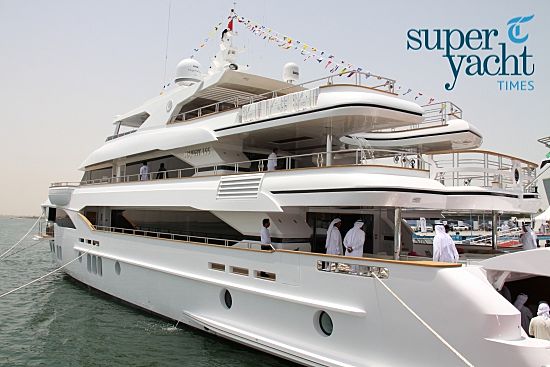 The yacht's sundeck features a fountain, bar and plenty of seating areas for socializing, for the most part protected from the elements by a fixed bimimi top. Instead of placing the Jacuzzi on the sundeck, Gulf Craft installed it one deck below, on the bridge deck. A waterfall cascades from the aft sundeck into the Jacuzzi. 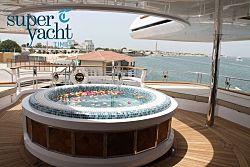 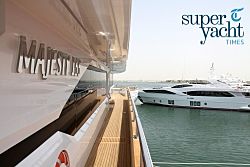 Another popular spot on board the yacht will undoubtedly be the beach club, with direct access to the aft platform. The beachclub will be fully equipped with a pantry, a retractable television, and a spacious lounging area. The lower deck also features a spacious side tender garage. 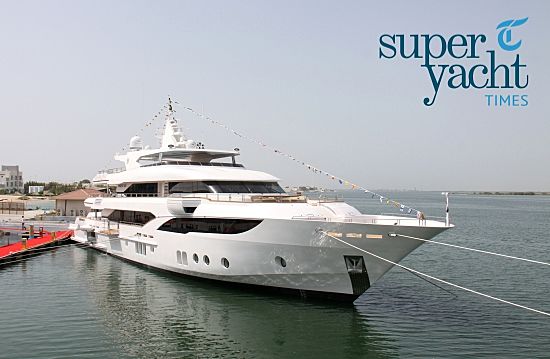 The Majesty 155 is powered by twin 2,011 hp MTU 12V 4,000 M63 engines provide, which provide a range of over 4,200nm with an approximate maximum speed of 16 knots. Her hull, designed by Massimo Gregori Grgič, of Yankee Delta Studio, allows for low fuel consumption, and her 9.60 metre beam allows for an even greater stability. 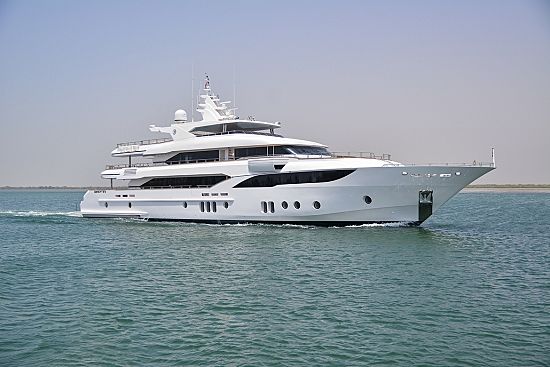 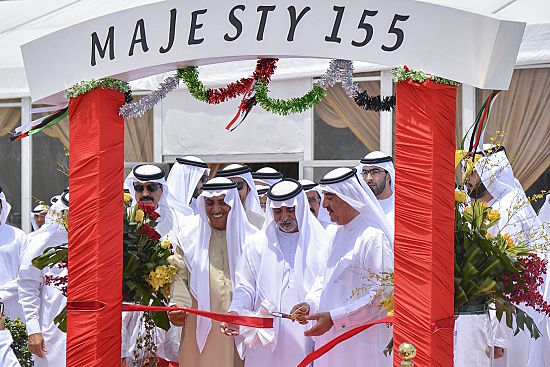 Mohammed Hussein Al Shaali, Chairman of Gulf Craft, commented: “Gulf Craft’s track record has been consistently recognized on a global level. The conception and creation of the Majesty 155 has further pushed our capabilities as a company, creating even higher expectations from our customers around the world.” 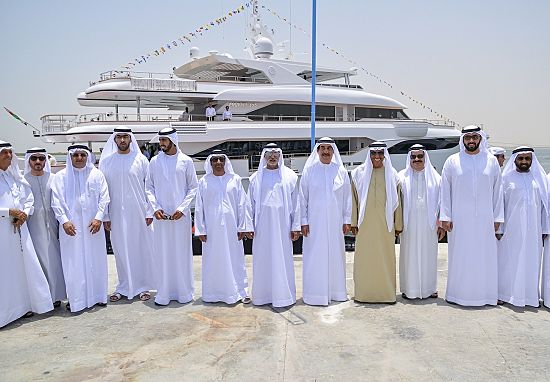 “With visionary leaders and a globally competitive mindset, the UAE makes it possible for us to further expand within an increasingly competitive industry, as well as establish the country as a global player in the leisure marine sector,”added Al Shaali. 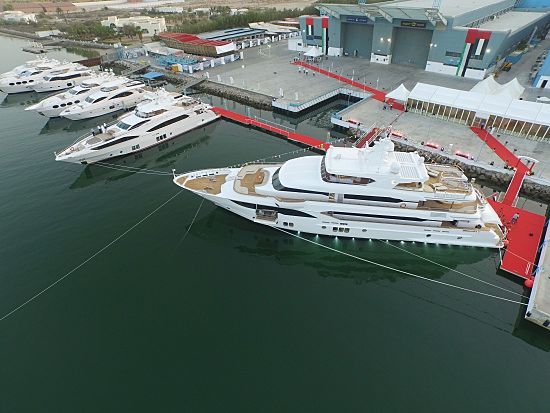 “We are very grateful toward all those who have contributed to our success, and who have supported us throughout our journey. We would also like to extend our sincere gratitude to our valued customers without whom, Gulf Craft would not have reached this high international ranking,” concluded Al Shaali. 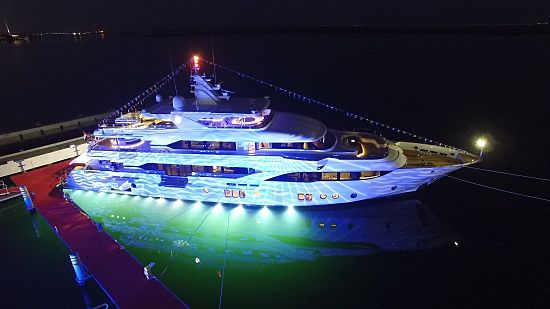 Erwin Bamps, CEO of Gulf Craft, believes the unveiling of the Majesty 155 is significant for a number of reasons. 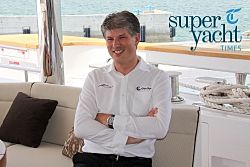 “This important milestone demonstrates our commitment to exceeding the ever-evolving needs and wants of global yachting enthusiasts,” said Bamps. “We understand that our customers have a genuine appreciation for opulence, and would like to experience the same lavish lifestyle and entertainment on water that they do on land. The Majesty 155 was crafted to provide a truly deluxe experience that has never before been available from Gulf Craft, as we continue our drive to gain market share”