Hakvoort has revealed the sale of a new 45.2-metre superyacht, known as Project Adur. The fast planing, full aluminium yacht, was sold by Ocean Independence, who is also handling her build management. Set to feature an exterior and interior design from Omega Architects and naval architecture from the board of Van Oossanen, the owner of the new project is said to have been “heavily involved” in the design process from the start.

Photo: Omega ArchitectsThe owner was introduced to the Dutch shipyard by Ocean Independence following their successful collaboration on the 38m motor yacht Soprano, which was delivered in 2017. Project Adur's sturdy exterior design bears clear and clean lines, creating a strong and masculine profile. Her exterior design also features innovative details introduced by her owner, such as scooped bulwarks with custom stainless handrail designs for each deck, offering a clear view to the sides of the yacht from all decks. In addition, the rubric has also been removed from her exterior to create a clean, smooth bulwark.

On board, she can host up to eight guests across four cabins, including an owner’s suite complete with a private office located on the main deck. The other three guest cabins are located on the lower deck, which will also house a gym and bow garage, complete with a submarine to explore the deep sea. On her lower deck Project Adur also features a side boarding tender garage, a dedicated lazaretto and dive shop behind a flush stern door. 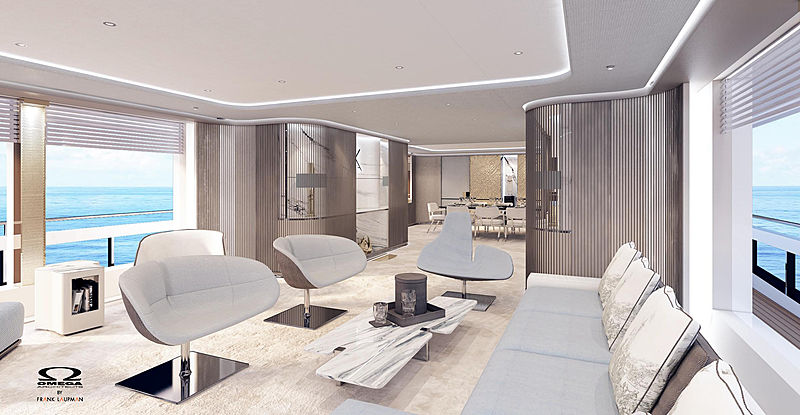 Photo: Omega ArchitectsProject Adur's interiors will feature floor to ceiling wrap-around windows on both aft decks, a request from the owner, in order to offer panoramic views from the main deck saloon and plenty of natural light to flood into the interiors. One stand out key feature onboard can be found in the owner’s suite, namely a loggia with an extendable balcony to offer the owner a deep connection to the outside environment and waters.

Thanks to her Fast Displacement Hull Form (FDHF), combined with Van Oossanen Hull Vane patented underwater spoiler, Project Adur’s fuel consumption will be reduced by 20 to 25%. Powered by twin 2580 kW MTU diesel engines and two electric booster engines, she will have an impressive top speed of 26.5 knots. At a steady cruising speed of 12 knots, Project Adur will have a transatlantic range of 3800 nm. Designed with efficient performance in mind, as well as reduced emissions, she is also capable of visiting pristine ecological areas.