The latest additions to the entry list for The Superyacht Cup Antigua are the two spectacular J Class yachts, Hanuman and Ranger. Hanuman, a replica of the yacht Endeavour II, was originally built to challenge for the America’s Cup against the defender, Ranger, in 1937. 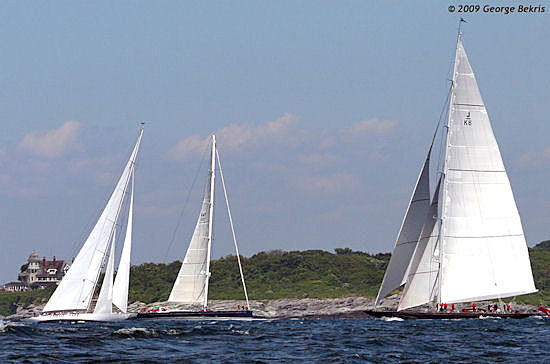 Hanuman was designed by Dykstra and Partners and launched in March 2009 from Royal Huisman shipyard in the Netherlands. The new generation Ranger, launched by Danish Yachts in late 2003, was designed by Olin Stephens. Ranger has been campaigned over the past few years with a very experienced professional race crew and has clocked up an impressive list of trophies. These two famous yachts sailed against each other for the first time at the Newport Bucket in July this year and their highly competitive nature allied with their classic, timeless beauty means they always draw great attention from sailing enthusiasts wherever they go around the world.

Returning for their second year as sponsor of The Superyacht Cup Antigua are Atollvic Shipyard. Atollvic are based in the estuary of Vigo in northwest Spain. They are a full-service shipyard dedicated to building, refit and repair of luxury yachts up to 55m.

A new sponsor, Newport Shipyard has also confirmed their support for SYC Antigua. The oldest working yacht repair and refit facility in the region, located downtown in Newport Harbor, the facility is dedicated to exceptional support, refitting and servicing of superyachts up to 300+ feet. The company’s commitment to quality and crew facilities has made Newport a popular superyacht destination for crew and owners alike. "We are thrilled to be part of the Superyacht Cup Antigua," said Dockmaster Eli Dana. "Several boats who are slated to race this year have called Newport Shipyard 'home' so we take pleasure in supporting such a great showcase for these beautiful yachts."

The social programme should keep all the crew busy with ideas for fancy dress outfits for the ‘Pirates of the Caribbean’ party, scheduled after the first race. A ‘Yacht Hop’ is planned for the Friday night, an informal and optional ‘open boat’ evening, giving owners and guests the chance to meet each other and visit some of the participating yachts. On the final night, a spectacular Prize Giving dinner will bring the event to a close.

The Superyacht Cup Antigua is now in its 4th year, it will be held at Nelson’s Dockyard in English Harbour from January 27th – 30th. The event is open to yachts of 24m and above and places are limited.