On September 29, 2006, Heesen Yachts launched yacht number 13147, Let It Be, the sistership to Yalla which launched in 2004. This is the second yacht built for the same owner. His first Heesen Yacht was a 37 meter, 121’ semi-displacement also named Let It Be after the famous Beatles song. 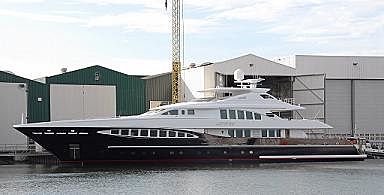 The interior is a contemporary combination of semi gloss cherry wood with walnut and copper accents. The soft furnishing and upholstery are in warm brown tints with off white ceilings and tasteful colors used for the beads and headboards. The marbles used in the bathrooms are colorful decorated marble floors and countertops with the walls in a combination of marble and lacquer. The salon and dining (12 persons) gives a spacious feeling and the central open staircase makes a perfect entry to the yacht.

The forward area has the owner’s stateroom and his/hers bathroom. Lower deck is equipped with two VIP staterooms, one double and one twin and two twin guest cabins. Main galley with direct access to the crew and wheelhouse is situated on the main deck. Wheelhouse deck includes the Captain’s area, VIP cabin and sky lounge.
The exterior decks are well equipped with lounge area on main deck aft, big dining arrangement on wheelhouse deck aft, Jacuzzi, dining and lounging area on the sundeck.

Let It Be is the 131st vessel launched at the Heesen facility and her home port will be the South of France.