Text and photos by Rosie McCall

Last Friday, The SuperYachtTimes team headed to Heesen’s Shipyard in Oss, Holland for the launch of the impressive 55 metre superyacht Quinta Essentia. This semi-displacement yacht represents one of the most organic superyachts built by Heesen to date, with her unique atrium-like curve in the centre and with her striking external colour scheme, designed by Dobroserdov Design, of Oyster White and Merlot Red, inspired by the owner's love for Merlot wine. Completed meticulously with the highest level of professionalism, this superyacht amalgamates each detail, giving her a comprehensive flow of theme and colour schemes from the interior to the exterior. 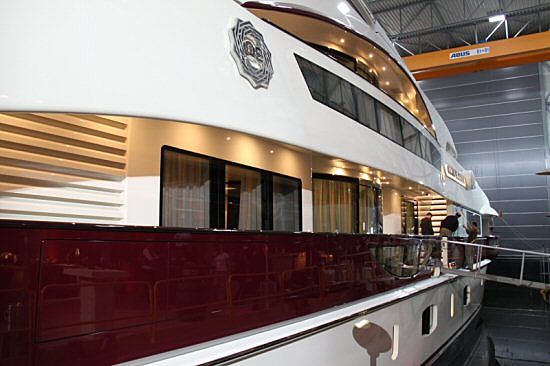 In the yacht’s main saloon Sergei Dobroserdov of Nakhimov, who managed the construction of the yacht and developed the concept for the yacht with the owner, spoke to the members of the press. As the owner's brief requested, Quinta Essentia features extremely spacious interiors, with sleek curves, as well as stylish custom made furniture throughout. 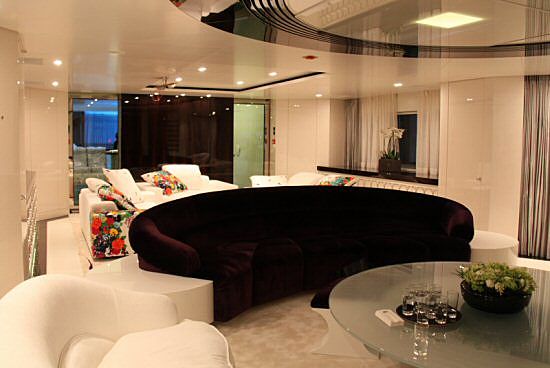 Quinta Essentia features an owner’s cabin, two large guest cabins which are convertible into one large VIP cabin, one double cabin and one twin cabin as well as one VIP cabin on the main deck. Additional special features include a grand piano in the main saloon, and the large swimming pool with a feature waterfall aft of the main deck. Powered by twin MTU engines she has a cruising speed of 22 knots and a top speed of 24 knots. 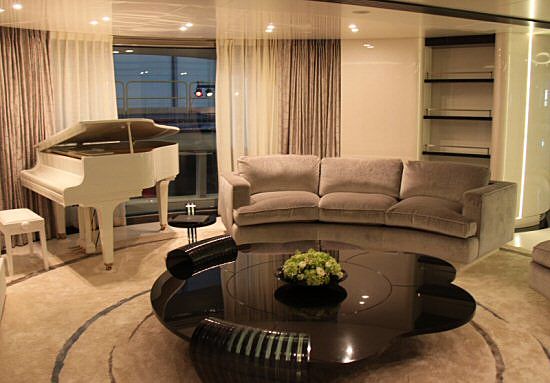 Michela Reverberi, who decorated the interior based on a design of Ken Freivokh, gave further explanation of the fine details that corresponded with the owner’s brief. As the name suggests, Quinta Essentia represents the fifth and highest element after the four natural elements of earth, air, fire and water. Therefore her design subtly incorporated the other four natural elements throughout the vessel. Examples of these elements could be seen with the usage of semi-precious stones in the owner’s bathroom representing the “earth” element. 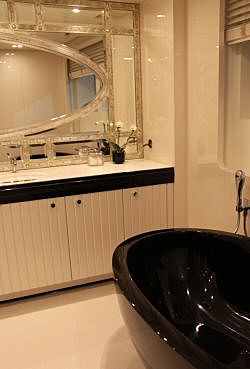 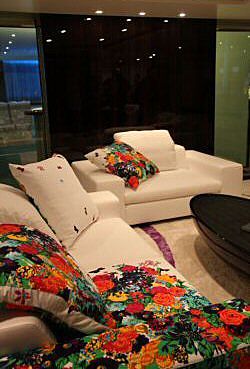 Frank Laupman of Omega Architects also spoke and gave a brief explanation of the project and of the enjoyable yet challenging process of striving for perfection. Afterwards, Sales Director Mark Cavendish addressed the entire assembly which included all the yard workers and amongst other things, appropriately thanked all the contributors for the success of the project. 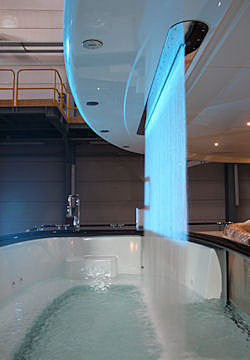 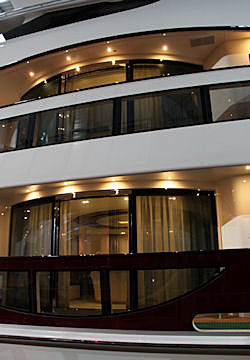 The superyacht’s chief stewardess Yanina Spatiro , who also worked on the owner’s previous Heesen superyacht Celestial Hope, was choosen by the owner to christen the yacht with a bottle of Champagne to help complete the traditional part of the ceremony. The rest of the afternoon carried on with lively music and cheerful discussions over the exciting new creation, Quinta Essentia.