Heesen Yachts has announced the delivery of the sixth vessel in the 47-Metre displacement class, a design that resulted from the close collaboration of Heesen Yachts’ in house naval architects and Frank Laupman from Omega Architects, who conceived her stream-lined exterior design with its pelican beak bow – a style that is now Heesen’s very recognisable trademark.

The 47-Metre displacement class is renowned for its fine entry at the bow, which incorporates an efficient bulb, its notable top speed of 15,5 Knots and an excellent range of 4.000 Nm at 12 knots. The yacht’s elegant superstructure combined with the sloped wheelhouse windows give Air a particularly sleek appearance. 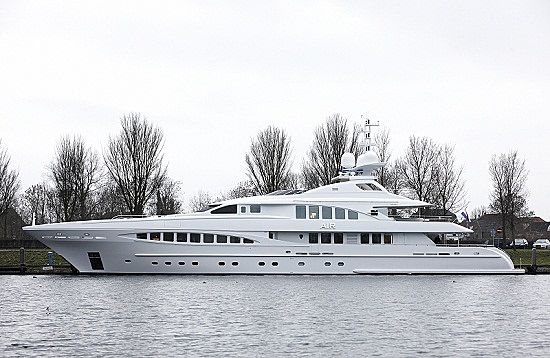 Air’s interior has been designed by Frank Laupman from Omega Architects, who created a classic contemporary style that makes use of ultra-modern loose furniture to create a cosy environment. The décor incorporates details in leather, brushed stainless steel and burl to make the atmosphere even warmer. Frank Laupman comments: “The aim of the design was to create a high-contrast modern interior, while avoiding a cold minimalistic theme. We used beige and warm accents throughout, blending these with a black-and-white overall mood and incorporating a few elements of intrigue, such as the frosted gemstone lights set into the leather column that strikes down through the central atrium.”

For strategic wood finishes, Laupman chose Japanese elm (Sen) veneer, an exotic pale timber whose strong veins have been brushed and lacquered in satin gloss, and skilfully positioned these adjacent to a darker American walnut to create a sophisticated and at the same time natural atmosphere.

Air accommodates the owner and ten guests in five cabins, four of these on the lower deck, and an owner’s suite traditionally located on the forward part of the main deck. Like the owner’s suite, one of the two VIP cabins that extend across the yacht’s full-beam offers a full bathroom, while all the other guests cabins have en suite shower rooms. The remaining two guest cabins are located on either side of a central passageway, with the cabin on the port side being a double, while to starboard is a twin cabin fitted with additional pullman beds that descend from the deckhead. For added versatility, the two single beds in this latter cabin can be easily transformed into a double.

The yacht’s eight crew members are accommodated in four cabins, all provided with ensuite shower rooms, while the captain’s cabin is located on the upper deck with direct access to the bridge.

The main saloon is divided into three areas, a lobby, lounge, and a formal dining area where all twelve guests are able to be seated around a rectangular table finished in matt wengé.

Perhaps the most striking feature of Air’s interior is the theatre room located on the upper deck. This incorporates a Panasonic 103" (262 cm) HD Plasma Screen (one of the biggest currently available on the market) complemented by a full 7.1 Steinway Lyngdorf Audio System. This unique audio installation, designed specifically for M/Y Air, includes two flagship Model D speakers standing nearly 7 feet tall on either side of the plasma screen. These speakers, together with the center and four surround speakers, are hand-finished in the same high-gloss black piano finish famously used on Steinway & Sons pianos and accented with 24k gold. To complete the system, are five Dual Woofers, three located below the plasma screen and two custom-built woofers in the deckhead to the rear. The system uses 6.400 Watts of power to provide flawless reproduction of music and movie sound tracks. A Custom iPad controls the whole system with both Crestron and Cisco.