Heesen Yachts has announced that project Azuro (YN 16650) was launched on March 28th, 2014. During the private launch ceremony the owners christened their new superyacht Monaco Wolf.

Rupert Nelson, a Director at Burgess who introduced the client to Heesen – comments: “The Heesen production team were on hand for the launching and it was a privilege to meet them in person. So often we meet the project front men and women, but it is equally important to know the production team - especially where there are shortened delivery schedules. Their support is crucial during the final stages prior to delivery."

The latest MTU engines, 16V 4000 M73L, power M/Y Monaco Wolf, resulting in a top speed of 23 knots and a range of over 3.100 nautical miles. The highly distinctive flowing lines were designed by Frank Laupman of Omega Architects and embody the Heesen family look and feel with its iconic reverse sheer ‘pelican beak’ bow. Continuous sheets of laminated triple glazing have been thermo-bonded to the superstructure creating a seamless wall of windows resulting in a striking contemporary look. 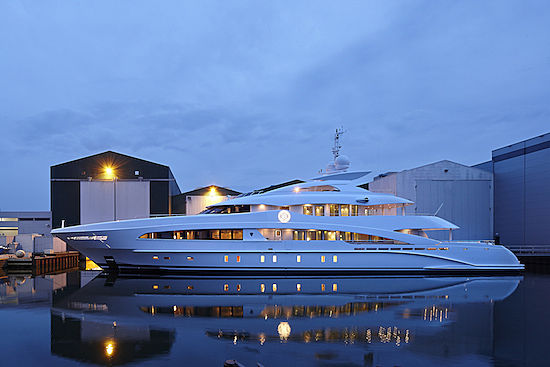 Her elegant interior design has been created by acclaimed Italian designer Francesco Paszkowski who comments: “I am very pleased to have had the chance to work with Heesen again. I like the way they challenge the designers while working on the project and defining its details. The result is a virtuous circle that combines technical and safety aspects with design and style, while keeping Heesen’s outstanding quality standards and our proposals. Team work played a crucial role in bringing this project to fruition”.

“Working at Heesen was gratifying because our design proposals were never refused whether related to new materials or custom elements. They perfectly translated every detail of our drawings into reality” adds Margherita Casprini, the architect who worked with Francesco Paszkowski on this project.

The design is enhanced by particular attention to the lighting systems throughout the yacht. Custom-controlled lighting can transform the atmosphere from bright party mode through to pools of subtle illumination.

M/Y Monaco Wolf can accommodate up to twelve guests in six staterooms. The master suite is traditionally located on the main deck. Both bedroom and bathroom are full-beam with windows running along their entire length. The other guest suites are found on the lower deck and include a full-beam VIP, two double and two twin cabins. Lastly and perhaps most importantly, the use of plate glass screens in the exterior railings means that as well as satisfying all the usual safety regulations, Monaco Wolf also offers safe passage for any canine companions.

M/Y Monaco Wolf will be tested in the North Sea before being delivered to her Owners at the end of May 2014.