Heesen Yachts has today announced their main sponsorship of the Synergy team for the 2012 RC44 Championship, founded by America’s Cup skipper Russell Coutts back in 2007. With a mix of amateurs and professionals in the crew line-up, the class attracts some of the world’s leading business minds as their owner-drivers along with many of the world’s top international sailors. The RC44 is established as one of the world’s leading yacht racing circuits. 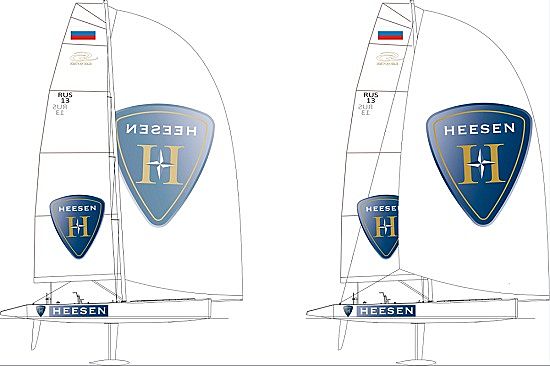 Fabio Ermetto, Sales and Marketing Director at Heesen Yachts, comments: “Speed is part of the Heesen DNA and the RC44 is most likely one of the fastest racing yachts on the water. On behalf of all of us at Heesen Yachts I would like to wish buon vento to the Synergy team and I hope to be able to celebrate with them some great victories in this exciting 2012 circuit!”.

RC44 is a light-displacement, high performance, one design racing yacht conceived to be fast downwind and powerful upwind. Co-designed by four-time America’s Cup winner Russell Coutts with naval architect Andrej Justin, the class endeavours to keep competition as fair as possible by ensuring the boats are strictly identical in terms of construction, shape of hull, appendages and weight/weight distribution as well as deck layout, equipment and sail plan.

With everything, from the keel to the tip of the mast, made entirely from carbon, and with a powerful sail plan, the RC44 is rapid downwind, commanding upwind and performs exceptionally in both light winds and heavier breezes. Hull, deck and stern scoop are built in sandwich construction of epoxy resin and exclusively carbon unidirectional and biaxial fabrics, while the twill carbon woven rowing is used to give a smooth, clear, carbon look finish on all external surfaces. The keel is built of carbon pre-preg material in carbon moulds post cured at high temperature and pressure in an autoclave. A weed cutter is fitted in the keel leading edge. The trim tab is built in carbon with RTM technology. The lead-antimony bulb is cast in CNC machined steel mould for high precision and faired with epoxy compound. The rudder and tapered rectangular section rudder shaft are one piece carbon built with RTM technology in a high precision female mould. The rudder shaft structure is FEM optimised and dimensioned according to ABS loads for speed of over 26 knots.