A simple idea can develop into a fruitful cooperation between two companies with a passion for detail. This happened when Voith Turbo Marine, well known supplier of the Voith Schneider Propellors, approached Heesen Yachts with a new development of theirs, the Voith Cycloidal rudder (VCR). A spinoff from the Voith Schneider main propulsion units, The VCR uses only two blades instead of the customary 4, 5 or 6, and can be used in an active mode (low speed thruster) or passive mode (high speed rudder). 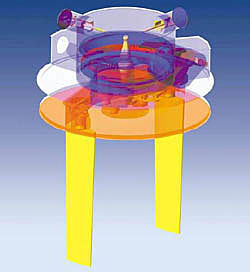 Meant to replace the rudders aft of the propellors, The VCR in active mode is intended to give manoeuvring aid to the captain at low speed, and has the added functionality that it can also be used for roll damping at zero or low speed.

Heesen Yachts did not need much time to see the potential of this new development, although not in exactly the same way Voith had envisioned. Instead of replacing the at rudders with VCR’s, Heesen Yachts' Naval Architect Bram Jongepier proposed to replace the midships fin stabilisers.

Since the area of the VCR blades is small compared to the rudders and very small compared to the fins, the advantage is that course keeping in rough seas is not compromised, and that the drag associated with the large fins is greatly reduced. Recognizing the value of Heesen’s idea Voith proposed a joint development programme which addressed not only the mechanics of the units and the electronics needed in the system, but also the integration in the onboard electric network. The positive results of the research ended up in the current introduction of the "Voith Motion Control System with VCR".

The VMC is a multifunctional tool to enhance manoeuvring capability, increase comfort, decrease environmental impact and add safety. It can be used in 5 different ways:

1 - Roll damping at low or zero speed including at-anchor heading control: The quintessential equipment on board megayachts these days is that which keeps it steady at anchor. Using the VMC active mode, thrust can be steered from port to starboard within the roll period of the vessel, resulting in a very powerful roll damping. Because the application of thrust is smoother than with fin sweeps and the duration of thrust has no limit, the new system yields the best roll damping available in the market, as has been proven with modeltests at Marin during the development phase. Also a highly effective way of stopping roll at anchor, heading control is integrated in the VMC system. By keeping the orientation of the yacht into the waves using the two midships thrusters, roll and yawing can be prevented.

2 - Silent cruising: Using the VMC thrusters to drive the yacht, it can make about 7 knots, depending on ship type, using only the generators. Without main engines, the noise on board will be gone, and with the gensets running at their optimum efficiency, the exhaust emissions will be reduced to the minimum. This is also an added safety feature, to drive the yacht home in case the main propulsion is out of order.

3 - Manoeuvring aid: In close quarters, the two 60 kW omnidirectional thrusters running on the generators give the captain a powerful extra control over the yacht. Free to use finely controlled thrust in any direction, the yacht can be turned, crabbed or driven in exactly the right way.

4 - High speed stabilising: Used in the passive mode the VMC units will function as very slender double fin stabilisers. Because of the high lift coefficients associated with the slender profiles, the stabilising effect of the system equals that of common fins of much larger area.

5 - Dynamic positioning: in a harbour waiting for a spot, in a dive spot above a delicate coral reef or any other place where it is not possible to use the anchors, the VMC system, combined with DP electronics, can keep the yacht at the exact location chosen, up to a certain environment in wind and current of course. Also useful in tight or crowded anchorages, were all room to swing has been taken, the VMC system can give a lot of extra peace of mind.

Since the initial development has been finalised successfully, Heesen has great confidence in the idea and has taken the decision to implement the "Voith Motion Control System with VCR" in one of their speculative 44m series yachts, and bring the system under attention of prospective customers.

Voith Cycloidal Rudder
Based on the Voith Schneider Propeller Technology the Voith Cycloidal Rudder (VCR) has been developed by Voith Turbo Marine. The VCR is in principle a Voith Schneider Propeller with only two blades. It can operate in two modes. In the active mode the VCR is producing thrust forces while the rotor is turning and the blades are oscillating, the physics behind are similar to a dolphins tail. The thrust can be changed in magnitude and direction (360 degrees) extremely fast. In the passive mode the rotor angle is changed and the VCR blades are acting like normal rudder blades or stabilisation fins.