The bright and accessible stand featured an impressive collection of fine linens and accessories which saw the Heirlooms staff offering advice to both new and existing customers. General Manager Ruth Douglas commented “after 10 years at MYS, Heirlooms has demonstrated that we are firmly embedded as one of the top suppliers and manufacturers to the Superyacht community. We are committed to providing the very best in products and service to the industry”. 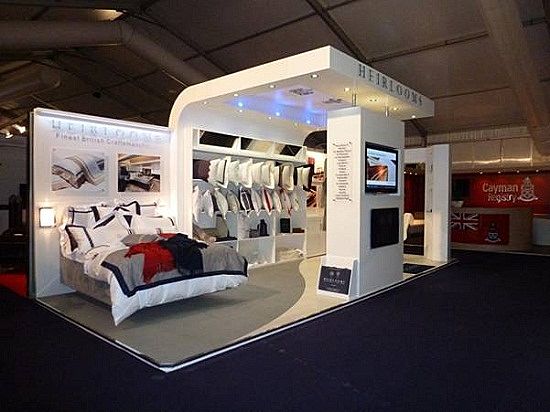 “Since Monaco we have had enquiries from more than 20 new build projects as well as current clients, who visited the stand to replenish their linen stock” further commented Ruth.

To reinforce the company’s position as a leading British manufacturer and supplier of linen, Ruth Douglas was interviewed by the BBC on the Heirlooms stand during the show. This was subsequently aired on BBC South together with a number of other British Marine Companies after Monaco.

Heirlooms extensive experience has cumulated in working on hundreds of yacht projects including SY Maltese Falcon, SY Hemisphere, MY Candyscape II, MY Nirvana, MY Adastra and Excellence V to name but a few. Residential projects include the exclusive One Hyde Park and The Lancaster’s.

Their linens are widely regarded as one of the most luxurious available. In addition, they offer an extensive range of fabrics in both plain and jacquard including 1000 thread count cotton satin and 200 cotton percale ideal for crew linens.

Heirlooms are the only UK linen manufacturer to hold the Royal warrants to supply linens to the households of both Her Majesty the Queen and His Royal Highness the Prince of Wales as well as other international Royal Families.