Major Exhibition Validates Reputation as the "Place to Do Boating Business"

Dubai International Boat Show has recorded scores of major deals this year, with contracts signed for everything from super-yachts through to dinghies, in addition to high sales for equipment and marine supplies.

The Gulf region is poised to overtake Europe in terms of per capita boat ownership, according to exhibitors gathering at the show, and the strong sales recorded at this year’s event underscores the business potential generated by this trend.

Organisers are confident that sales will overtake last year’s high figures, which broke the US$ 100 million barrier, further reinforcing DIBS’ reputation as a key show to "do business"in the boating industry.

Companies from across the region have created a particular splash at the event, with groups from Qatar, Bahrain, Kuwait and the UAE all registering significant sales.

Long-term exhibitors Al Yousuf commented on the ongoing growth and development of the show, and noted its ongoing specialisation and internationalisation. The group secured its largest-ever exhibition space at the show, with 620 square meters, and has been rewarded with record sales.

"Al Yousuf was present at the first-ever Boat Show, and we are delighted with the pace of its development in recent years. Every Show brings higher levels of business," said Ayman Ayad, General Manager, Bikes & Marine Division, Al Yousuf

"We have seen unprecedented demand for our full range of in-board and out-board engines, as well as for WaveRunners and Quads. The global market leader, the Yamaha F250 outboard engine, has been our top seller at DIBS 2007 so far,"he added. 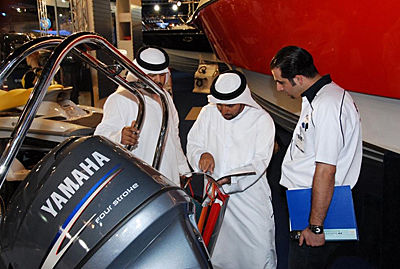 In addition, the group has recorded high sales for its Sea Prince 39 luxury boats and Sea Odyssey 42 Boats, both designed by the Everitt Design Group.

UK-based Fairline Boats, which has designed and manufactured more than 11,000 luxury powerboats in the last 40 years, has been exhibiting its flagship yacht, the "Squadron 74 custom,"which retails at nearly US$ 5m.

Fairline was able to use DIBS 2007 to launch its first Middle East dealership, to be based in Dubai.

Commenting on the new dealership, Bryan Jones, marketing manager, Fairline, said: "This show has gone from strength-to-strength in recent years. As the market has developed, our need for a dealership in the region has intensified, so DIBS seemed like the natural location to unveil our plans for the Middle East."

The UAE’s Gulf Craft Inc. saw high sales levels, breaking its 2006 record of more than US$10 million worth of boats sold within the first three days, including a record number of its Majesty Yachts class vessels.

"Gulf Craft is exhibiting a total of 21 boats this year, attracting significant attention from both visiting VIPS as well as many buyers. DIBS has once again provided us with an ideal platform to achieve local and international sales,"said Erwin Bamps, executive manager, Gulf Craft Inc. 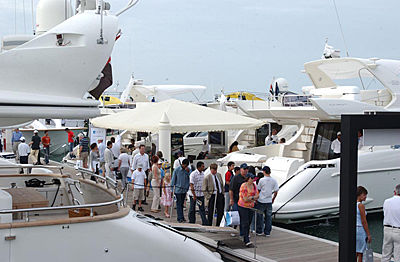 National groups exhibiting in the Luxury supplies and services area have also enjoyed a successful show, with the British Marine Federation, Australian Federation and the National Marine Manufacturers Association (NMMA) from the USA all reporting high satisfaction levels at the number and value of transactions at the show.

"The NMMA has more than 50 member companies represented at this year’s Dubai International Boat Show, which demonstrates how much US companies are looking to enter the Middle East market. There’s no doubt – looking at the figures – that this has been our most successful show to date,"said Janice Ilg, program manager, Accessory Division of the NMMA.

Al Masaood’s MTU Division recorded a first-day sale worth more than US $1.3m for two 2,500 horse power engines including a fully integrated control and monitoring system.

The MTU 12v 4000 M71 engines on display at Boat Show are among the most advanced engines in the world, offering a rail fuel engine system, sequential turbo and smoke-free engines.

"Every year, we enjoy high sales at the Dubai International Boat Show, and it is great for us to have closed this major deal on the first day. We see DIBS as an important platform to do business, which enables us to turn leads into strong sales in rapid time,"said Amgad Emil, sales manager for Al Masaood’s MTU Division.