CRN sold 31 megayachts between September 2004 and the present. Semi-custom maxi-yachts ranging in length from 29 to 43 metres accounted for 23 of the sales, while the 8 other vessels were fully customised steel ships at lengths of from 46 to 72 metres. These sales results were unprecedented for the Ancona shipyard, and probably for the entire nautical industry as well.

During the last year, a total of 18 vessels were sold under the Custom Line brand, managed by CRN, in addition to 5 three-deck ships that are now part of the CRN composite fleet: 2 CRN 128’ vessels and no fewer than 3 of the CRN 43, a new displacement project whose first hull, sold during the previous year, shall be launched by the end of Spring.

The eight steel boats sold are a 46-metre ship of the “Magnifica” line(#118), plus a 54-metre ship (#121), a 57-metre model (#122), a 60-metre yacht (#123), two 56-metre vessels, a 59-metre ship (#126) and a 72-metre mega-yacht (#124), this last the largest vessel ever built at the shipyard, and one of the longest ever constructed in Italy. The success of the CRN Sales Office is mirrored by the triumphant results of an historic, unprecedented period for the shipyard of the Ferretti Group. Specialised in building steel and aluminium mega-yachts that can reach lengths of up to 80 metres, plus 40 and 43-metre composite maxi-yachts, CRN can point to a stellar sales record over the last three years. 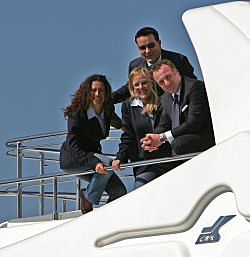 At the latest meeting of the company’s management, held last March, an analysis of the growth of CRN sales led to the formulation of a precise strategy for the future. Over the middle period, a program of consolidation focuses precise actions at strategic markets. Upcoming sales activities set as objectives by the company include an attentive analysis of the emerging countries referred to as the BIRC (Brazil, India, Russia and Cina), plus activities designed to achieve local penetration, along with a strengthening of sales efforts in the Middle East, where the CRN can already point to a large number of clients.

But the shipyard is also looking for sales overseas, in the United States and North America, a zone to which a new Area Manager was recently assigned: Paul Madden, whose many years of experience selling mega-yachts have been added to the shipyard’s sales team, guaranteeing a skilled, highly trained presence in American territory. People and products: an inseparable combination that provides the groundwork for any great company.

This is the philosophy that has allowed the shipyard to develop, along with its production of prestigious mega-yachts, a sales team capable of making the most of these products. The team is a close-knit, highly skilled, motivated group that brings the products to life, making them widely known and recognised. A squad of five people, lead by Sales Director Vasco Buonpensiere, handles client relations throughout every phase of the vessel’s development at the CRN: from the progressive formulation of the design, when the plans are still on paper, through the different production phases, all the way to the launch and delivery. The relationship established between the client and the CRN sales team is direct and constant. This lasting, stimulating bond involves a mutual exchange of ideas, knowledge and skills, plus endless passion. The constant attention paid to the shipowner before the sale of the vessel - and, even more importantly, afterwards - is one of the keys to the shipyard’s sales success, as demonstrated by the large number of repeated clients.

The CRN Sales Office shall also be consolidating efforts undertaken recently, developing strong relations and lasting ties with the world’s leading brokers and dealers. Participation in strategic events in the pleasure-boat sector, plus the company’s traditional presence at the most important boat shows, completes a plan for development that is always centred around people and products, making for a growth process that has been unstoppable for years.