Following discussions with the Royal Northern and Clyde Yacht Club, two more important, historic trophies have been secured for presentation to the winners of the J Class Solent Regatta, in addition to the Royal Southampton Yacht Club’s “Queen’s Cup”. 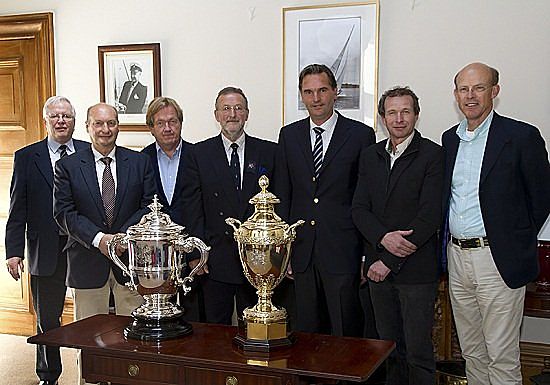 The Corinthian King’s Cup – 1914
This is a large and impressive silver yachting trophy, engraved “The Kings Cup”, and first presented in 1914 by King George V to the sailing yacht Cestrian. This will be renamed “The Corinthian King’s Cup”, and will be presented each year as a perpetual trophy “for friendly competition between J Class yachts, each sailed by an amateur owner”. The trophy is on permanent loan from the Royal Northern and Clyde Yacht Club, which has a long history of J Class and America’s Cup involvement.

King George V owned and raced the yacht Britannia and, for almost four decades, was synonymous with big class yachts. The King was a great sportsman who personally helmed his yacht even under the most challenging conditions. He embodied the true Corinthian spirit in big class yachting and his presence kept a diverse fleet of large yachts sailing as one. The annual series for this trophy will be based on regattas agreed by the JCA each year. This year it will be based on the overall scores from the Solent Regatta and the Hundred Guinea Cup race.

This trophy was kindly donated by Jan Hart, an associate member of the JCA, keen supporter of the fleet, and owner of Claasens and Bloemsma Shipyards in Holland. The trophy was last won by Eric Maxwell with the 12-Metre yacht Sceptre which competed against the American defender Columbia in the 1958 America’s Cup. Mr. Maxwell was a member of the Royal Northern and Clyde Yacht Club.

The RSYC Queen’s Cup
The “Queen’s Cup” was first presented to the Royal Southampton Yacht Club in 1897 by Queen Victoria in her Diamond Jubilee year, and is awarded every year at the most prestigious race organised by RSYC. The handsome silver gilt trophy stands 53cm tall and weighs approximately 5.3 kilos.

Eleven boats entered the first Queen’s Cup race on 9th August 1897. Starting off at Netley, Southampton, the 40 mile course took the yachts twice round Bramble and Lepe buoys. It was won by Latana, a 165-tonne yawl, owned by Mr W. M. Johnstone and by far the biggest boat in the race.

This cup is recognised as one of the UK’s premier yachting trophies and will be presented by HRH Prince Michael of Kent GCVO, Admiral of RSYC, to the winner of the J Class Solent Regatta, 18- 20th July. The three races are programmed to sail around the Solent area, offering outstanding opportunities to view the fleet of J Class yachts, more than has ever been seen together in UK waters.