One of the most famous names in yacht design has been commissioned to build a unique new vessel that will put it back at the cutting edge of international boat design.

Scottish firm A.Mylne & Co. is the oldest continually designing naval architecture office in the world, and having been acquired by well-established Fife business Ace Marine Ltd, is set to chart an ambitious route to once again become an industry leader.

Mylne’s latest project is a commission for a Swiss industrialist that will be worth in the region of £7million when complete, and will be designed in its offices in Limekilns on the banks of the Forth. The 36 metre (118ft) vessel will be a modern craft but featuring a classic look, and be capable of circumnavigating the world.

This is the first major project for Mylne since the build of Kate in St Kitts in 2006, and the first new Mylne yacht design for thirty years, an important milestone in the 115 year history of one of the oldest yacht design companies in the world. 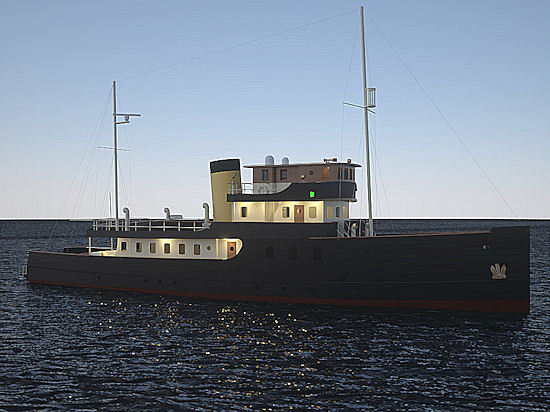 Mylne secured the commission, currently code-named PF-36, due to its heritage of producing some of the finest Edwardian yachts of the pre-war years, but also the fact it now offers the very latest in design technology. The brief for the project meant the yacht had to be as tough, reliable, and environmentally friendly as possible, while still encompassing a traditional style to suit the client’s tastes.

The specially designed hull form reduces slamming and pitching motions, while active fin stabilisers minimise roll. The hull efficiency has been highly optimised to give a target fuel consumption of 30 litres per hour at 10 knots, less than half that required by a modern equivalently sized vessel.

Mylne analysed thousands of hull variations to find the most efficient hull form and produced a design that uses less than half the equivalent fuel burn for a modern wide beam yacht of its size. Tank testing at Glasgow University has been undertaken to confirm the initial analysis results. Other green initiatives include fitting a specially developed and engineered skysail to take advantage of wind power during long crossings. There will also be a wind generator, LED energy efficient lighting, and extra thermal and acoustic insulation. The yacht will be built to Lloyds Ice Class rule requirements, giving the owner comfort for summer time excursions to colder waters and the assurance that if it hits ice it will be more than capable of breaking through it.

The traditional exterior styling belies a raft of truly modern design elements. Nearly every component has a dual purpose, and nothing is fitted for the sake of adornment. From the original Hastie steering pedestal on the bridge, to the recycled ships windows fitted throughout, it is an ingenious combination of new and old. The interior design, by top Scottish firm Malcolm Duffin Design, reflects this trend with a combination of traditional panelling complemented with lighter, more contemporary colour tones.

While there are traditional layout and fittings throughout, the latest technology in alarms monitoring and control will also be fitted. Open a drawer and you can turn on one of the ten iPads located throughout the vessel to access Navigation charts, speed and heading, tank levels, engine and generator status, interior and exterior lighting, audio visual entertainment, and even the underwater dolphin watching camera mounted under the bow. In another nod to the craft’s Scottish heritage it will also feature a whisky room stocked with the finest of the country’s malts.

The ship will go into production later in 2011 and is scheduled to be completed by Spring 2013. The location of its build has yet to be decided and Mylne is exploring options with boat yards both in the UK and abroad who are competing for the prestigious contract. Mylne is also in the process of sourcing as many local Scottish suppliers as possible to provide the fixtures and fittings for the vessel.

Mylne already has a number of other new designs in the pipeline ready to be launched as it seeks to anchor its presence at the top of the industry as a world leader in commercial, leisure and sporting naval architecture.

"We are delighted with this new project as it is very much in keeping with the whole ethos of Mylne. It really is a fantastic opportunity to put the company’s name back on the map. It’s the culmination of the hard work we’ve been putting in over a number of years to revive Mylne. Once we have this one under our belts we are looking at expansion and other ways in which we can build up the company. We already have plans for a range of new leisure boats that reflect the classic Mylne style cues and believe there is a market for them all around the world due to the very strong heritage of the brand, so it’s a very exciting time for the business.”