Fresh from joining the sea trials of the newly launched Essence 33, designer Andre Hoek is highly enthusiastic about this spectacular Dutch daysailer. “She is built to an incredibly high standard in every respect - few if any day sailors have ever been made to this quality level while also offering such an exceptional performance.” 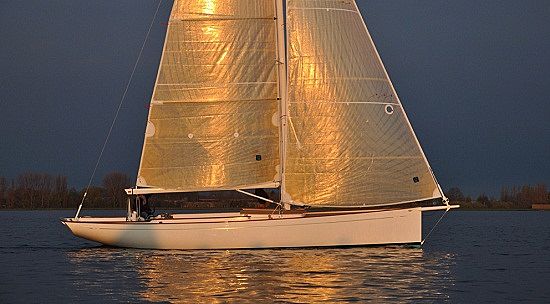 Built by the Dutch yard Yagt, and with comprehensive naval architecture and engineering provided by Hoek Design, the first Essence 33 has been launched to considerable acclaim. “It is aimed at sophisticated sailors who are looking for luxury, comfort, performance and style,” says Andre Hoek. “Everything is carefully thought through, from her exterior looks to the phenomenal interior, from the technical installations (including electric propulsion and lithium batteries) to the fine construction detailing. This is a superyacht in all but size.”

The Essence 33 performs exceptionally well in practice. “During the first sea trials we reached speeds of 10 knots, which is a full two knots above hull speed,” continues Hoek. "Moreover, we were surfing over waves at 15 knots on just the jib and main, without the gennaker. This easy planing performance is nothing short of incredible and I was genuinely - and very pleasantly - surprised. The Essence 33 is an amazing little boat in both light and heavy winds, and sails as good as she looks.”

Hoek was sailing on the lake version but the boat is available with a deeper keel for bluewater cruising, which would increase the performance further. Five more yachts are under construction at the moment and delivery times are short. The Essence 33 is built in a female mould in epoxy with Corecell foam and glass and carbon reinforcements and deck. She is fitted with carbon Hall spars and rod rigging, a 5 kW main electric propulsion and max prop. CE classified in design category B the Essence 33 is also Lloyd’s certified.

Andre Hoek is also impressed with the way the Essence 33 can be sailed single-handedly using the steering wheel. “All the control lines and halyards are recessed to below deck and lead back to the wheel, from where the electric winches can be operated (including reverse winding). This makes for an exceptional combination of pushbutton sailing and flush aesthetics.” A tiller configuration is also available.

“There is nothing equivalent to this boat on the current daysailer market,” concludes Hoek. “The Essence 33 synthesises a classic design with modern touches and technologies, and is therefore likely to appeal to the broadest possible range of owners.”