Hoek Design in the Netherlands has announced the delivery of the first ever Pilot Classic 85. Built by the Dutch shipyard Aluboot for a Turkish client, Windhunter is a spectacular vessel in her own right as well as another superb example of the increasing trend for performance yachts in this style. Hoek Design’s ‘Pilot Classic’ concept is also currently being brought to fruition in even larger sizes in major custom builds at Royal Huisman. 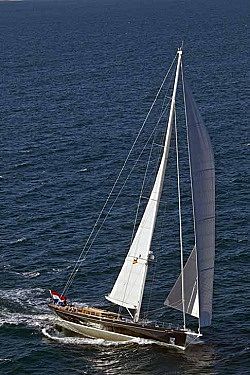 Windhunter synthesises the finest in Dutch construction and design with impressive input from the owners and their representative Bora Kadikoy. The brief called for an 85-foot sailing yacht with an outstanding performance, flush decks, a plumb bow for a long waterline and the ability for the vessel to be sailed and maintained by a permanent crew of two. The yacht was to be classically styled above the water, with a lifting keel that stays below the interior floorboards in order to reduce draft for marinas. Carbon spars were chosen and the yacht was to be fast in light airs and in upwind conditions.

All this and more has been achieved by Hoek Design, which was responsible for the naval architecture, exterior styling, interior design and workshop drawings. The design was extensively optimised for performance and construction got underway at the Aluboot yard, which is specialised in aluminium sailing yachts and lifting keels.

Windhunter is the sixth yacht from the boards of Hoek Design to be built at Aluboot, which has also gained enormous experience in the need for uncompromising quality by building vessels for the Dutch lifeboat organisation KNRM.

Hoek Design has been exploring classically styled yachts with a plumb bow since the late 1990s. The first yacht in this style was the 36 ft Tintel, launched in 2001. This exceptionally fast yacht started a new tradition of which Windhunter is the latest fine example.

Windhunter‘s hull is built in 5083 aluminium with longitudinal framing on transverse web frames in order to have a light and stiff hull construction. A recessed hydraulically operated side boarding ladder has been integrated in the construction and great emphasis given to reduce or eliminate corrosion where stainless steel parts join the aluminium construction for fairleads, deck drains and hatches. The yacht has an aluminium bowsprit and a high modulus carbon mast and V boom by Hall Spars with rod rigging. 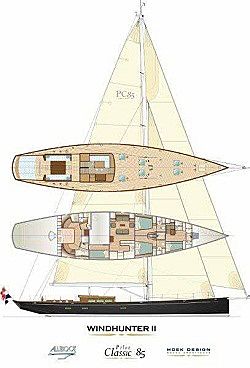 Technically Windhunter is equipped with robust systems, hydraulic winches, simple electric installations, air-conditioning and all other systems one will expect to find on a superyacht of this length. The lifting keel is a development between Aluboot and Hoek Design which has previously been seen on other Truly Classic designs. It keeps the lifting mechanism below the floorboards, freeing up extra space interior for Windhunter’s social spaces.

The interior design was arranged by the Hoek office with soft furnishings by Esra Gunray from Istanbul. A classic but contemporary look combines mahogany panelling with off-white painted areas, leather floors in mahogany margins and subtle upholstery. The owner’s stateroom is located aft across the full beam. It includes ‘his & hers’ bathrooms, with a bathtub in the latter being a relatively rare feature onboard a yacht this size.

The stateroom is accessible via a cabin that can either be used as a walk-in closet or a spare guest cabin. The main deckhouse is home to the dining table while the lower saloon features an integrated galley. There are two guest cabins with ensuite bathrooms forward of the saloon with a decent crew cabin for two further forward.

The crew cabin with an ensuite bathroom has access during bad weather from inside the bathroom and from on deck in normal conditions. A small crew mess and galley complete the picture on a boat that is meticulously thought through in every respect. Windhunter was recently nominated for several International design awards.