Horizon Yachts has announced the launch of a new Horizon V80 yacht. She accommodates guests over a spacious four stateroom layout, consisting of a king stateroom, a Queen VIP stateroom in the bow, and two twin cabins below deck. 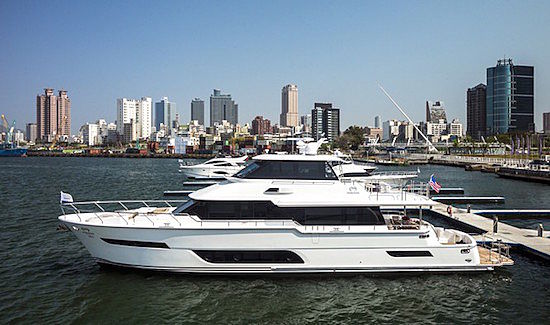 Amongst her notable characteristics is her large entertainment areas, including the boat deck, the aft deck, forward deck, dining area and skylounge. “As the first Horizon V80 motoryacht in the U.S., she has been intricately designed for the market, specifically for West Coast, and we know her high quality, interior fit and finish, and design features will appeal to boaters from all regions,” said Horizon Group CEO John Lu.

She comes equipped with twin CAT C32 1600H Pengines, reaching a top speed of 25.5 knots and a cruising speed of up to 21 knots. She is available for delivery on the U.S. West Coast and will be showcased at the 2015 Newport Beach Boat Show next month.