Following almost two years of intense and meticulous construction, the first Horizon Premier 130+ was launched at the Premier Pier and successfully finished her sea trials at Kaohsiung harbor. All the test results show the performance and comfort of the yacht are perfect, and provide proof that Horizon Group has successfully achieved world-class megayacht builder status. 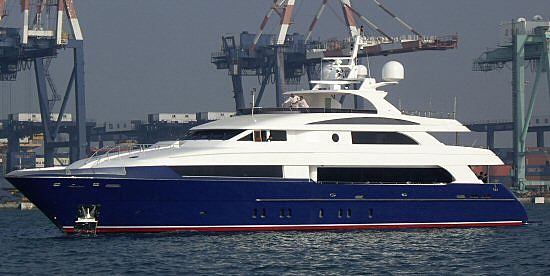 As the largest yacht ever built in Taiwan, the Horizon Premier 130+ model sets a new benchmark for quality standards here. All the materials and equipment lists were selected from well-known and qualified manufacturers, and all the workers were chosen for their excellent skills and craftsmanship. Based on the highest safety and quality standards, the Horizon Premier 130+ has been built to full Det Norske Veritas (DNV) classification together with MCA LY2 code compliance. All designs, materials, equipments, and construction processes were surveyed and checked by DNV, and all system tests were carried out under DNV surveyors’ scrutiny. The Horizon Premier 130+ has also been designed to comply with the MCA LY2 code, which is the most important code for large yacht operation. DNV checked the design and sea trials to certify that the Horizon Premier 130+ fully complies with MCA LY2 requirements.

The Horizon Premier 130+ is equipped with two Caterpillar C32 main engines, each rated at 1,825 horsepower. Based on the sea trials, the yacht’s top speed is 18 knots at maximum engine output. Cruising speed of 14 knots is achieved with 55 percent engine output. The 11,000-gallon diesel fuel capacity will deliver a range of 1,400 nautical miles at 14 knots, or 3,300 nm range at 11 knots. Electrical power is supplied by two 80kW generators featuring parallel operation. The 75KVA shore power converters also provide parallel function with the generators for “seamless power transfer” capability. In the wheelhouse, all the navigation and communication systems comply with international GMDSS requirements, which ensure safe operation across all oceans. The onboard entertainment system is similarly modern and incorporates Crestron controllers. Utilizing a single remote controller, all the AV systems together with lighting and window shades can be operated at the touch of a button. 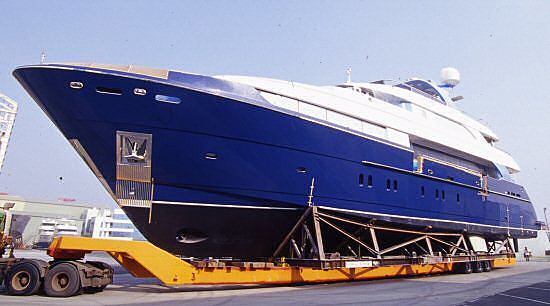 The Horizon Premier 130+ owes her refined yet modern look to Florida-based stylist JC Espinosa, and her fine lines and systems engineering to Canadian naval architect Greg Marshall. The interior design is also by JC Espinosa. There is one big tender garage at the stern accessed by three hydraulic doors, a space large enough for one 16-foot jet tender and two Yamaha 375-hp Jetskis. Although the tender garage occupies considerable space, the forward area of the lower deck still allows three luxurious guest staterooms and crew quarters for eight persons. The center spiral staircase accesses all three decks.

By pushing the ventilation trunks to the aft end of deckhouse, the main salon and adjacent dining salon area flow seamlessly without obstructions to block the view. The entire galley is finished in stainless steel surfaces to provide a clean look, better fire safety and easy maintenance. Hull Number 1 has a pair of master staterooms, one located forward on the main deck and the other aft on the sky deck, insuring maximum privacy and independence. In order to use the most suitable material for each space, there are 13 different veneers and 11 marbles installed on the boat. Such diversity requires a lot of managing and craftsmanship, but the final results show it is worth the effort.

The first Horizon Premier 130+, to be christened Miss Rose, will be delivered to her owner by end-January 2008 then shipped to North America in March.