On January 18th, the Horizon RP105 Agora was christened in Hiroshima, Japan by her new owners Mr. and Mrs. Akita; they held a traditional Japanese Shinto ceremony called "shinsuishiki" to launch and subsequently christen their new motor yacht at the Sakaigahama dock. In Japan, "shinsuishiki" formally announces the name of the vessel to the Gods and asks for prayers and blessings for the yacht on all of her voyages. 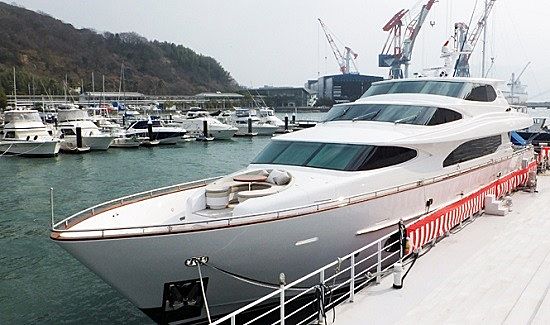 This was the second time Horizon attended a traditional Japanese naming ceremony for Mr. and Mrs. Akita -- they held a "shinsuishiki" for their first Horizon motoryacht, a 2010 E78 also named Agora. Horizon Group CEO John Lu was a special guest for the event, along with interior designer Luca Dini, Horizon Japan representative Mr. Shintani and the owners' family and friends.

During the ceremony, a Shinto priestess wore a formal ritual costume to perform the traditional christening ceremony, and during the blessing ritual, John Lu was invited to hold the branch that represents Shinto and flipped the branch, then bowed and clapped twice to offer worship.