Horizon Yachts has launched another Horizon RP110. The new yacht is named Paradise, and is built for an Australian owner. 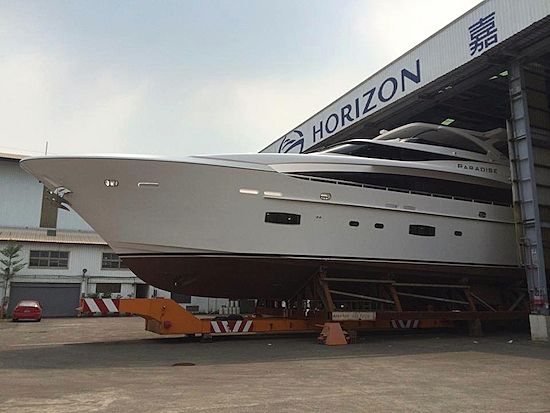 The yacht is currently undergoing seatrials, and after these have been finished, she will then be shipped to Perth for delivery before Christmas.

The Horizon RP110 is designed by JC Espinosa, with naval architecture from Don Blount and Horizon.

We are not entirely certain if this is the third, or the fourth RP110 launched by Horizon. The first one was called Andrea VI, the second one is called Carnival Liberty, and we also came across a photo of a Horizon RP110 called Esther 7. It could be that Esther 7 is the new name of either Andrea VI or Carnival Liberty, or she could be the third yacht in the series. Please contact us if you have more information.

UPDATE: The shipyard has confirmed that Paradise is the third hull in the series. Carnival Liberty was sold recently, and is now renamed Esther 7.