Recently the hull and superstructure of Moonen's largest-ever yacht, the first 37.80-metre Moonen 124, were transported to their new annex construction hall in nearby Groot-Ammers. The transport of the two massive sections was an impressive event for local folk in the generally flat Dutch countryside. Once both sections were in the 63-metre hall, shipwrights and welders joined the aluminium superstructure, fabricated at the main yard in 's-Hertogenbosch, to the steel hull, built in Gorinchem. The principal machinery (main engines and generators) had already been installed so further outfitting could begin immediately. 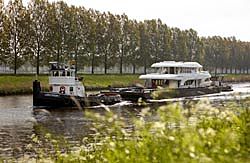 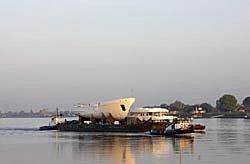 In this new Groot-Ammers facility, Moonen will build yachts up to 45 metres LOA, beginning with the Moonen 124 to be named Snow White when launched in spring 2009. Moonen will continue to build yachts up to 35 metres in 's-Hertogenbosch and maintain the design, engineering, purchasing, and interior joinery functions there for projects in both locations.