The latest Hydro Tech project by ing. Sergio Cutolo is a 35 meter Explorer Vessel, also known as the HT116’ Explorer, designed for the Kingship Itd shipyard in Hong Kong. The Explorer is the first of three models Hydro Tec has been commissioned with from the Chinese shipyard. The next two models in the series are a bigger yacht of 148 feet and smaller one of 87 feet, all sharing the same family look. 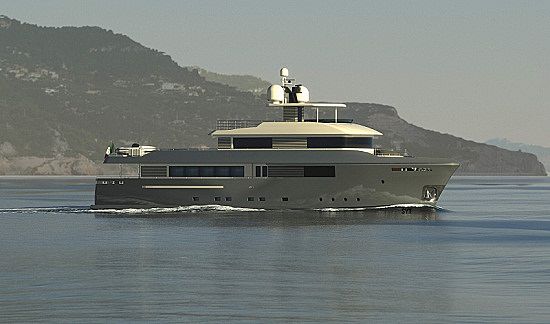 A spectacular fly bridge and extraordinary autonomy are the main features of the HT116’ Explorer, the 165th Hydro Tec project commissioned by the Kingship shipyard of Hong Kong to ing. Sergio Cutolo’s firm. The Chinese yard recently presented the yacht at the Seoul boat show, eliciting very interest from the crowd.

The HT116’ Explorer, for which Hydro Tec has designed the external lines as well as the hydrodynamics and engineering, is a typical example of yacht with extended cruises in mind and as such has extensive fuel and water capacities, excellent sea keeping in all conditions and extensive internal volume. She has a steel hull and an aluminum superstructure. The hull is a classic full displacement type and with a rudder profile optimized for the propeller wake along with a powerful bow-thruster, the yacht has very good maneuverability. The HT116's performance is characterized by her excellent fuel efficiency. The prolusion choice led to the use of twin 448 kW Cat C18 Acert's that provide a maximum speed of 13 knots or a range of 7000 nm at a cruising speed of 11.5 knots. The yacht also incorporates an active stabilization system also at anchor, based on two non-retractable fins. 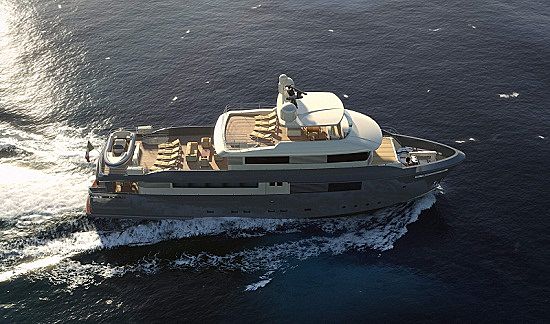 The HT116’ Explorer has four large guest cabins including two VIP suites and two doubles, plus there are three double cabins for the crew, all on the lower deck. On the main deck, from bow to stern, there is an enormous lounge complete with dining room, kitchen and an amazing owner’s suite. The suite is extremely spacious and will be used exclusively by the yacht’s owner. On the upper deck there is a passageway with the captain’s cabin along with an area to relax with a small lounge and open space, complete with Jacuzzi. On the Sun deck, there is a solarium and dining area with both a bar and barbecue.

The HT 116’ Explorer came about through an agreement with the Kingship shipyard and led to the development of three Explorer models, all destined for the global market. The 116’ is the first of the series and will be followed by a larger 148 foot and then a smaller 87 foot. All three projects will be presented at the Monaco boat show in September.

This new series of Explorer Vessels will certainly enrich the yacht design portfolio of Hydro Tec where the core theme is for expansive space, low fuel consumption and extended cruising range, perfect for today’s market. Ing. Cutolo has such a broad experience when it comes to this type of yacht that he is currently exclusively working on projects for Navetta or Explorer type yachts. In addition to the Kingship series, Hydro Tec is also working on a 70 foot yacht for the Malta based company Tecnav, an 86 footer for the Marche yard and a 45 meter yacht for a private owner. All of these projects can be classed as true explorer vessels.