Imtech N.V. (technical services provider in Europe) announces that it is acting as technology partner of PlanetSolar, the largest ship powered by solar energy in the world. The ship is being officially exhibited today on the occasion of the 821st birthday of Hamburg’s harbour. In 2011, PlanetSolar will set sail on a world cruise of approximately 50,000 km, with the aim of promoting solar energy and the use of environmentally-conscious alternative fuel for sailing. 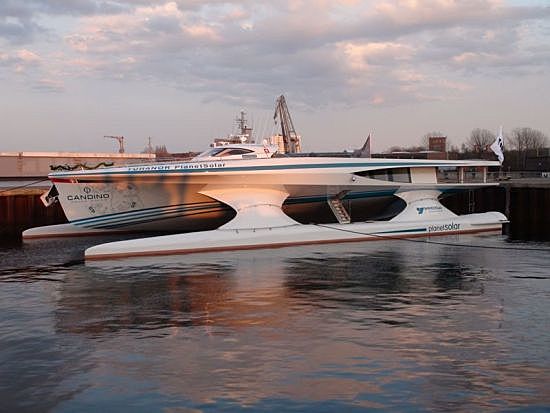 René van der Bruggen, CEO of Imtech: ‘Society is becoming increasingly sustainable and technology is playing a leading role in this process. The trend towards ‘green’ technical infrastructure, which started in the energy, buildings, and data centres markets, is now also obvious present in the maritime market. Being a technical services provider with the ability to integrate high-tech energy technology in our total portfolio (electrical solutions, ICT and mechanical solutions), our ‘green’ services package matches this social trend perfectly. Also we possess a large number of sustainable technical competencies. The order for PlanetSolar and several other maritime initiatives have resulted in Imtech becoming a ‘green frontrunner’ in the global maritime market.’

High-tech catamaran covered by solar panels
PlanetSolar is a high-tech 85-ton, 31-metre long and 15-metre wide catamaran, which is covered by 537 m2 of solar panels. The futuristic-looking ship is powered by two 10 kW electric motors. On board it has the world’s largest lithium-ion battery, with a power storage capacity of 2910 Ah and a weight of 11 tons. In total, PlanetSolar can travel 1,000 km without sunlight. PlanetSolar has a top speed of 14 knots (25 km/h) and can house around 40 guests. It produces zero environmental pollution and the ship moves noiselessly. The Knierim Shipyard together with HDW constructed the ship in Kiel, Germany.

Energy promotion cruise around the world in 140 days
PlanetSolar is an initiative of Swiss national Raphaël Domjan, president and skipper of the ship. Jean Verne, the great-grandson of Jules Verne is one of the project’s ‘godfathers’. This is the first ship to undertake a cruise around the world powered entirely by solar energy. The 50,000 km journey is expected to take 140 days at an average speed of 8 knots (15 km/h). The planned route is via the Atlantic Ocean, through the Panama Canal, across the Pacific and Indian Oceans, and home via the Suez Canal and the Mediterranean Sea. ‘Energy Consciousness Stops’ will be made amongst others in New York, San Francisco, Darwin, Hong Kong, Singapore, Abu Dhabi and Marseilles.

Imtech: technology partner for ‘green’ technology
Imtech is acting as technology partner on PlanetSolar and is responsible for the project management, engineering, implementation and commissioning of the high-tech energy distribution system, the technology that provides for charging the lithium-ion battery, the alarm & monitoring system and the cable system. Imtech is a frontrunner in ‘green’ infrastructure for ships. For instance, Imtech has provided a large part of the ‘green’ technical infrastructure on board the ‘Rainbow Warrior III’, the new flagship of Greenpeace. In the USA, Imtech is involved in an ecological sightseeing boat powered by a combination of solar energy and sustainable electrical propulsion. Together with Feadship (designer and builder of luxury yachts) and MTU (builder of ships’ engines), Imtech is researching the possibilities of constructing ‘green’ luxury (mega) yachts. Recently Imtech has also developed a ‘smart battery concept’ for the long-term distribution of energy on board ships.