For Italian yacht builder Sanlorenzo, motor yacht Attila is a big deal. The company has continuously proved its worth as a big metal yacht builder over the past several years, stepping up production massively with the opening of its dedicated superyacht division in La Spezia in 2016. That first step was epitomised by the launch of Sanlorenzo’s first 52Steel superyacht, Seven Sins, the following year. This next step is more of a leap than anything else. The 64Steel is not only 12 metres longer than Sanlorenzo’s former flagship, but is in fact three times larges at 1,600 GT compared to Seven Sins’ 499 GT. 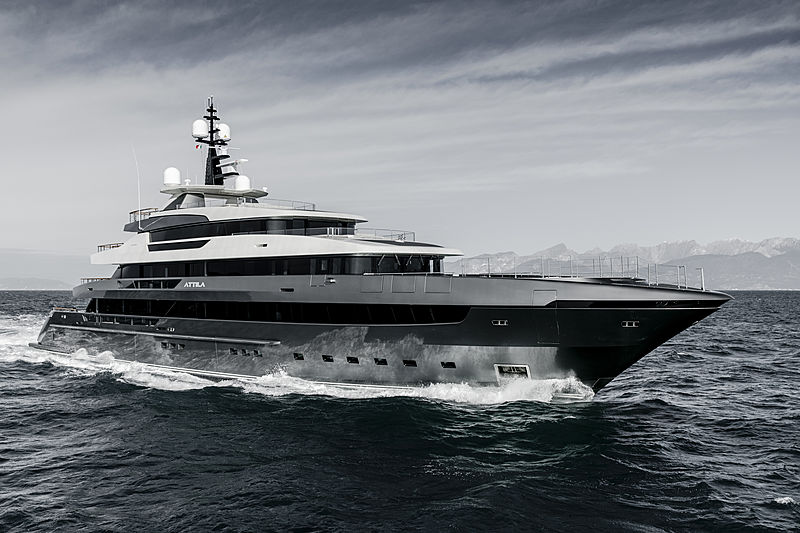 A completely new project such as Attila would always be a challenge. To take it on, Sanlorenzo approached Officina Italiana Design (OID) and designers Francesco Paszkowski and Margherita Casprini, all of whom Sanlorenzo has worked with extensively in the past. Rounding off the key players is an experienced owner who was looking to build his second superyacht with the shipyard. This experience shared by the project team proved vital in the overall success of the project. 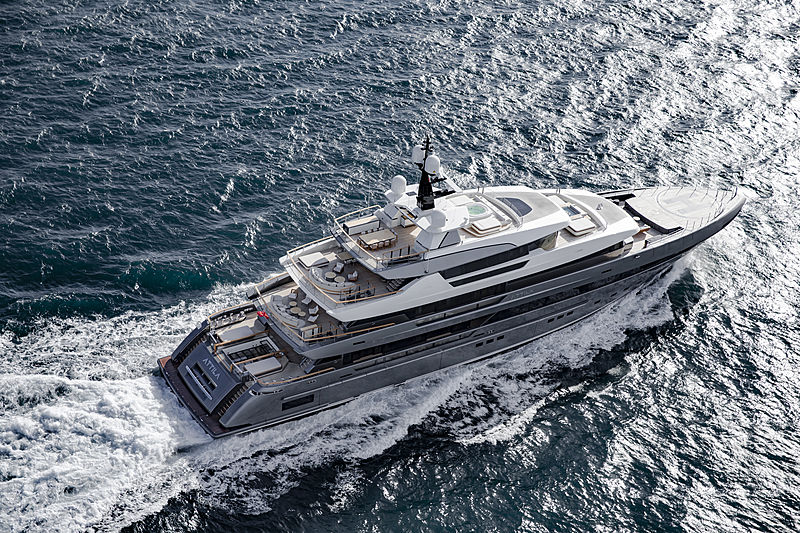 Together with Sanlorenzo’s team of engineers, OID developed a comfortable oceangoing platform that could be extended from 64 to 70 metres for flexibility and started by including highlights from the 52Steel range that proved popular among clients. It is therefore no surprise to find familiar features such as a large three-way-opening beach club, glass-bottomed infinity pool, excellent guest-crew separation for charter, and a customisable interior as standard on the 64Steel. In Attila’s case, her owner specifically requested storage for a 10-metre limousine tender, private owner’s deck and a touch-and-go helipad - all of which have been seamlessly incorporated into the final design by OID and the creative layout power of Sanlorenzo’s research department. 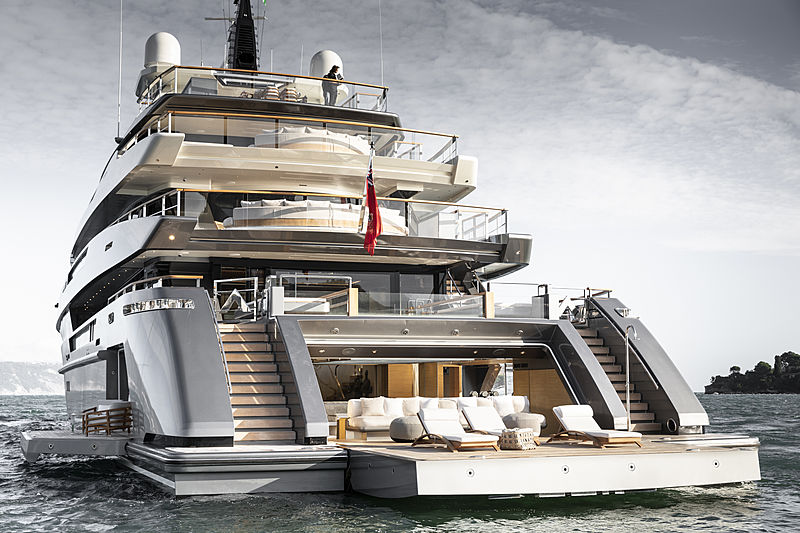 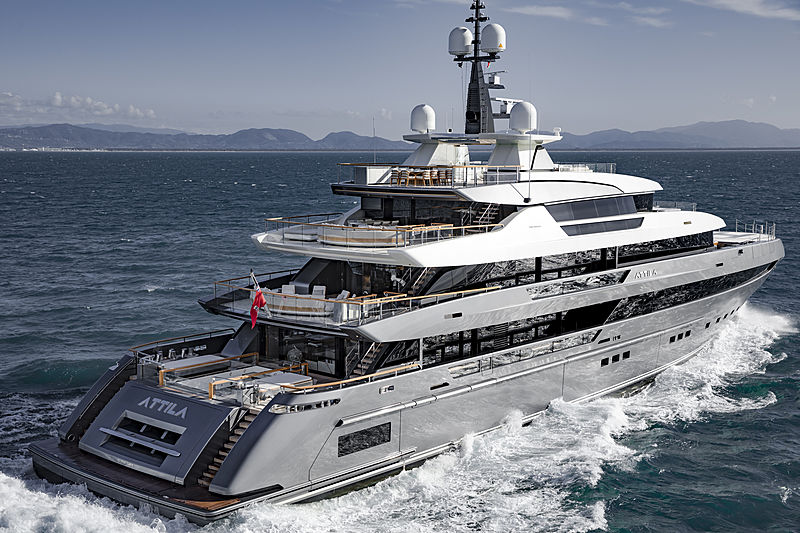 Designed by Francesco Paszkowksi and Margherita Casprini, Attila’s interior spaces are inspired by her owner’s South American roots. The strong family values characteristic of this region is reflected in the lifestyle features of the yacht and is beautifully echoed in the modern yet inviting interior with its underlying theme of natural materials such as the extensive use of teak. The use of glass and metal gives the interior a sharp edge which is softened by oversized furniture of plush suede. 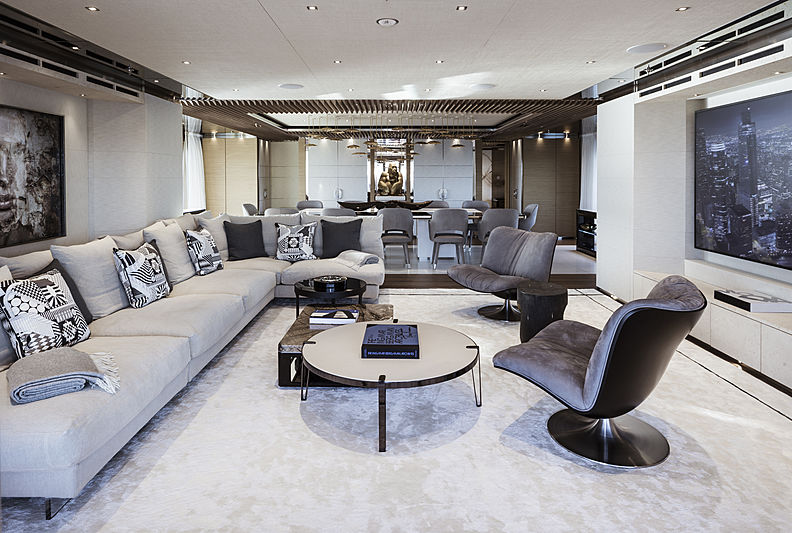 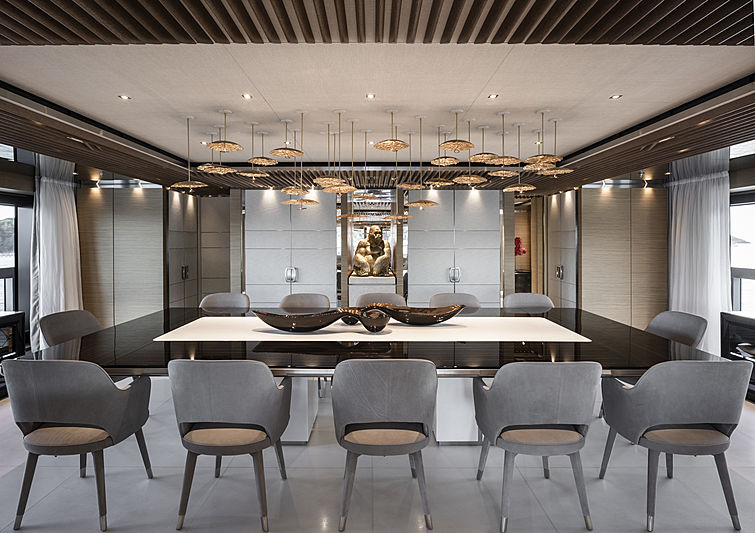 One of the most unique features on the inside is the special dining area on the main deck where a fully-equipped galley takes centre stage as per the request of the Argentinian owner who has a passion for fine cuisine and is backed up by a custom meat storage and curing facility in the tank deck. “The arrangement of an open fire in an enclosed space in fact required the use of A60 fireproof stainless steel and the installation of an advanced smoke removal system,” explains the shipyard. 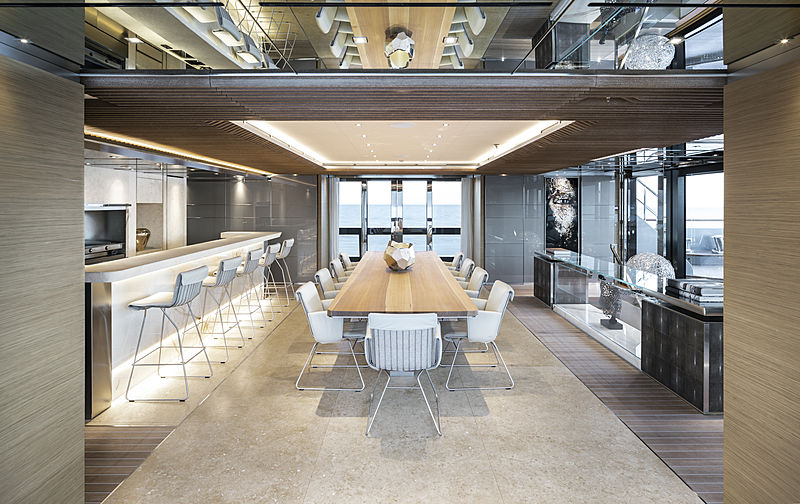 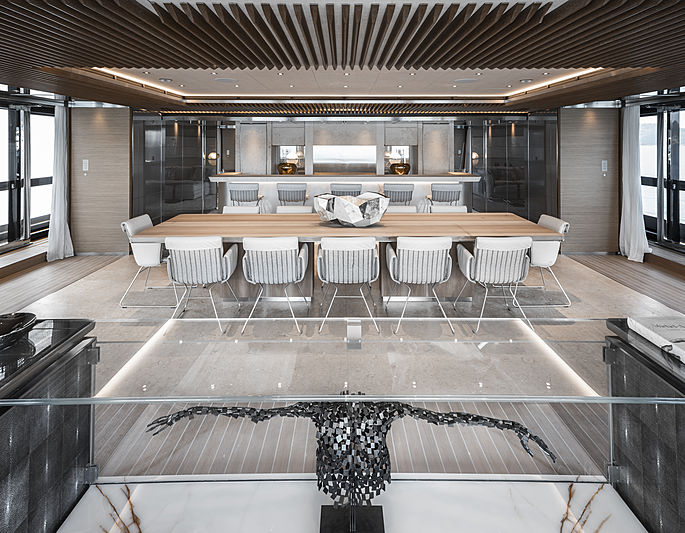 The entire upper deck is dedicated to the owner and consists of a large apartment that connects an outdoor sun area with jacuzzi and a private lounge with a forward-facing bedroom suite. Here, full-height sliding doors open onto a front balcony with even more natural light entering the cabin through a lifesized skylight placed right above the bed. 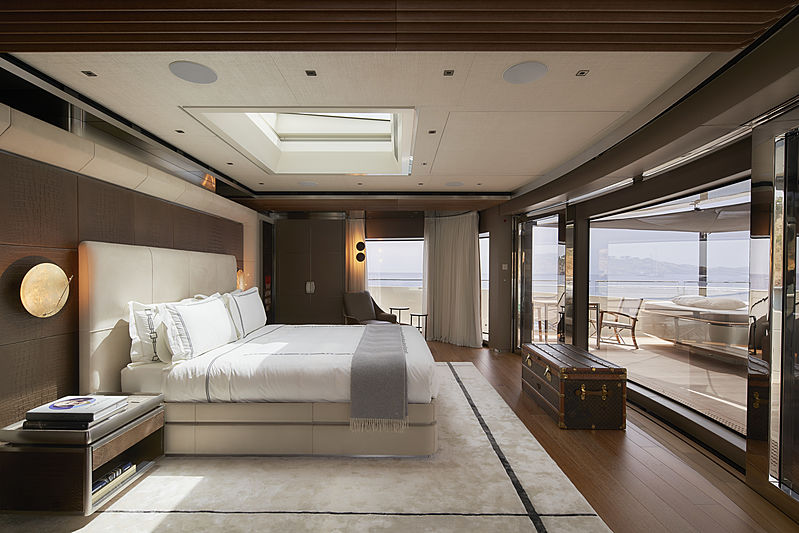 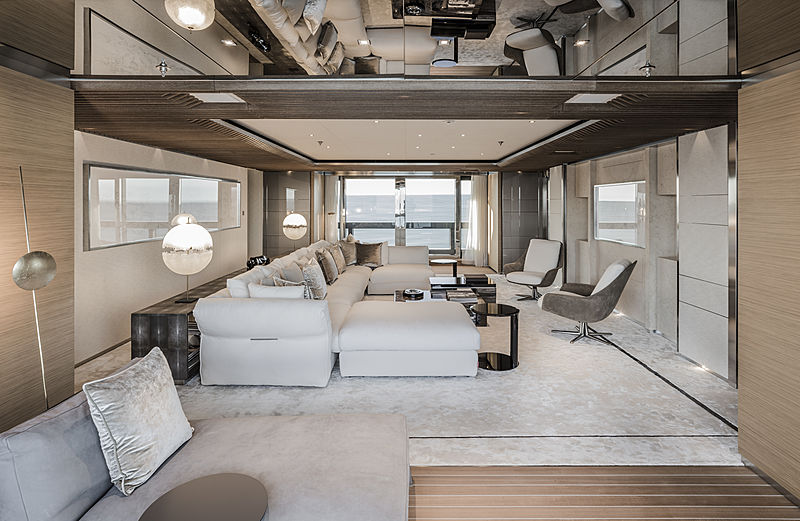 It is also on this deck where the owner can enjoy an intimate lunch with uninterrupted views thanks to the full-glass railings that line the aft section. For larger gatherings, a 12-seater dining setup on the sundeck provides the perfect setting for a dining experience under the stars.

The remaining guests are all accommodated for on the main deck where four guest suites (three double and one twin) are located along a central corridor with a full-beam VIP stateroom forward of this section. 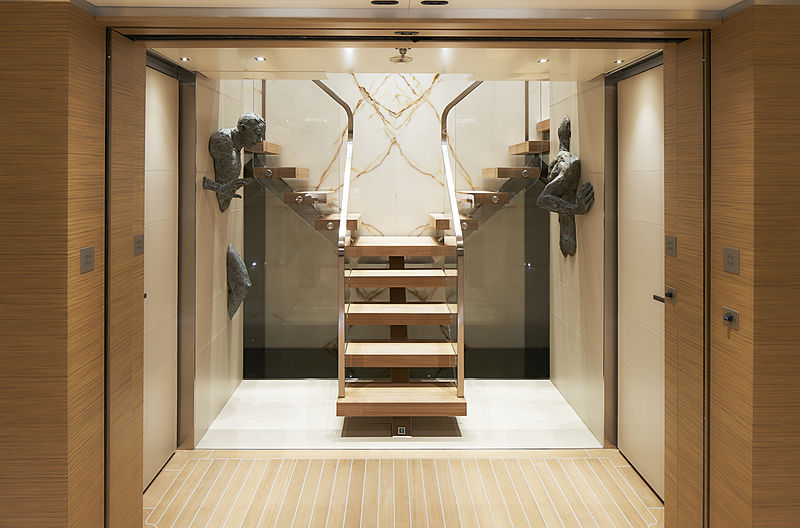 Back outside, the pièce de résistance that is Attila’s beach club can open up to reveal a connected waterside chill zone of 78 square metres. Complete with a sauna, steam bath and massage room, guests can head down here for more than a dip in the ocean, not to mention hanging out under the mesmerising glass pool that sprinkles this space with magical rays of sunshine - a great way to end a fun day on the water with Attila’s selection of tenders, jet skis and toys which get neatly hidden away in the amidships garage. 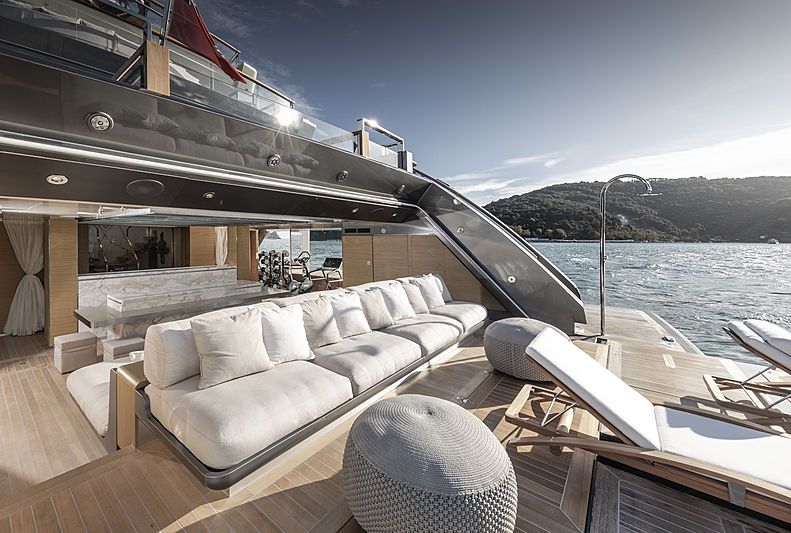 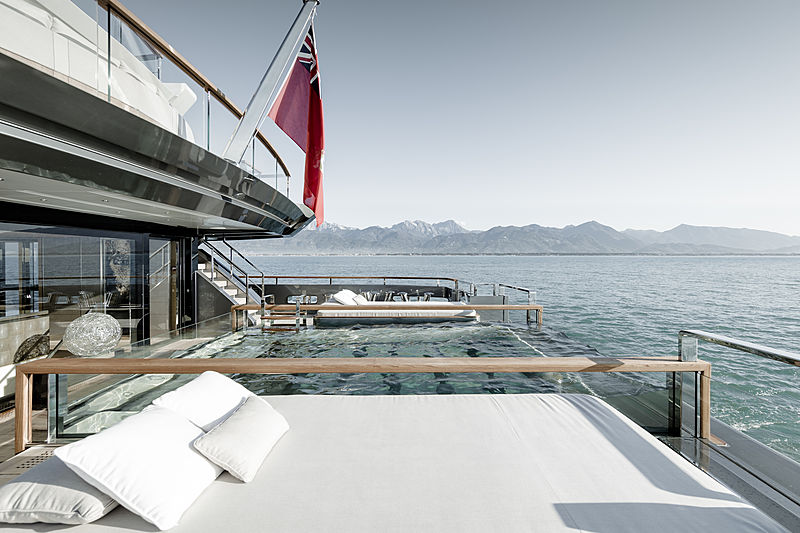 In addition to its long-distance cruising capabilities thanks to a 160,000-litre fuel tank, Attila can also reach a respectable 17 knots top speed at full power. The ship's systems are monitored from the bridge through an innovative I-Bridge Head Up Display from Team Italia which perfectly matches the modern and minimalist style of the yacht's interior.