Home > News > Video: Behind the design of the 141m motor yacht Yas

Life for Yas started in 1981 when the then 130-metre-long vessel was launched as the HNLMS Piet Hein (F811) at the Koninklijke Schelde shipyard in Vlissingen, the Netherlands. She served in the Royal Dutch Navy for over two decades and covered countless miles as she participated in several international missions. The vessel then changed hands for the first time and was inducted into UAE military service in 1998, serving under the name Al Emarat (F 02) in its navy until 2006.

Iskandar Safa, Chairman of the ADM shipyard that was behind the build of Yas, explains how the vessel went from frigate to superyacht. “The owner was driven by sentiment and was looking for a yacht that had a backbone of a frigate which was successfully used by the navy of his country and he wanted the entire project to be carried out in Abu Dhabi.”

According to designer Jacques Pierrejean, the man behind the abstract lines of the vessel, the project started with a visit to the naval vessel and talks of a small refit project. As he and the rest of the build team would later realise, the project soon turned into a far more complex operation, nothing short of a new build project.

As the dismantling process got underway in Abu Dhabi, the team, led by Project Manager Johan Valentijn, found that much of the existing structure of the vessel would have to be replaced. And so, Yas was stripped to the bone and essentially rebuilt using materials such as carbon fibre for an extra-tough foundation. It was during this period that the designers also saw the opportunity to extend the stern area of the vessel which would eventually serve as Yas’ pool deck, taking the overall length of the new vessel to 141-metres. Jacques Pierrejean explains: “We proposed to extend the aft section of the boat by roughly 12 metres, which would allow us enough space to fit the outdoor bar and pool area. That turned out to be an important part of the design for me as I felt, for the overall fluidity of the shape of the yacht, this made a big difference.” 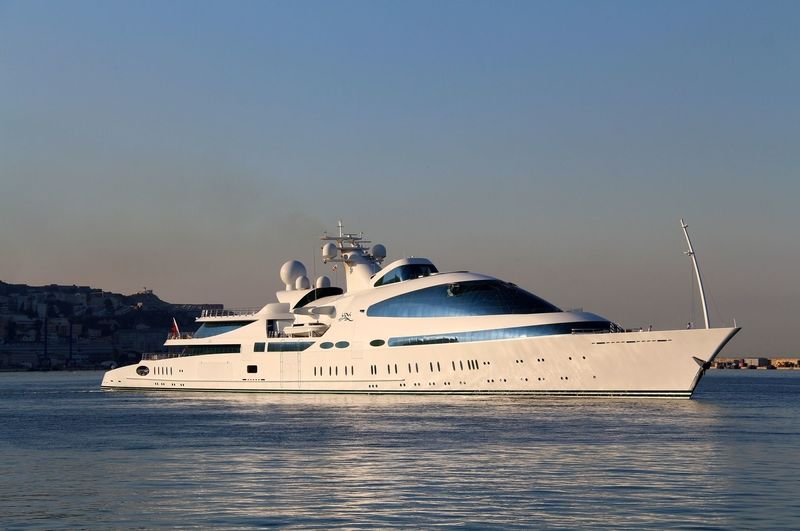 Photo: Giovanni RomeroYas was launched at Port Zayed in Abu Dhabi in 2011 and spent the next four years in the area as she was outfitted and had her custom interior installed.

During an intensive five-day sea trial phase, Yas was pushed to her limit in terms of performance and guest satisfaction. In the shallow waters around Abu Dhabi, she managed to reach a speed of 29.9 knots, an impressive number considering the size of the vessel. “Thanks to her narrow hull and subsequent lower resistance, Yas is able to reach a much higher speed with far less power,” says Valentijn.

Inside, an impressive owner’s cabin is located on the forward upper deck, hidden underneath a giant glass dome that offers spectacular panoramic views to the outside. A second, ‘hidden’ suite within the suite provides the necessary privacy required by her owner.

A special feature onboard Yas that she shares with no other superyacht on the water is her ability to accommodate up to 60 overnight guests. Conventional maritime classifications in the big yacht segment would not allow for a vessel of her size to carry so many passengers, but with a new yacht rule set out by the owner, yachts such as Yas can now be built in Abu Dhabi under these special regulations. In addition to her guests, Yas is also home to up to 69 crew members when in full-service mode.

In Pictures: The 141m Yas on the French Riviera