Born and raised in Charleston, South Carolina, Charles P. ‘Buddy’ Darby oozes a warm, southern American demeanour and a welcoming sense of confidence that makes one feel instantly at ease - qualities rare of, but well suited to, the man at the head of one of the largest marina developments the Caribbean has ever seen. As pleasant as a warm and personable attitude is, however, it’s really the years’ of experience in investment and development that make Darby the right man at the helm of building Christophe Harbour marina in St. Kitts. 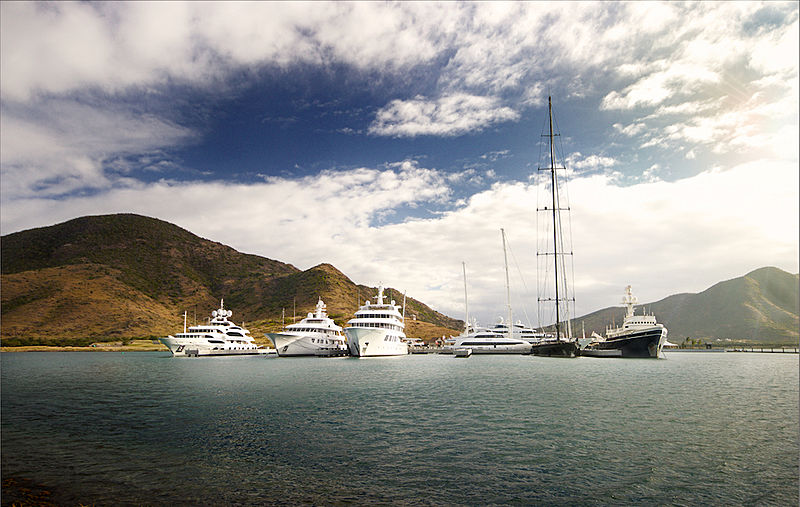 The majority of this experience hails from a successful 30 year career at the head of the real estate developers, Kiawah Partners. Co-founding the company in the late 80s, notable projects include breathing life into Kiawah Island, a 10,000-acre sea island located 21 miles south of Charleston, as well as establishing the Irish golf haven, The Lodge At Doonbeg - the latter of which was acquired by the Trump empire in 2014. “For the last 30 years I’ve been building golf courses, a resort, hotels… a lot of what I’m bringing to Christophe Harbour,” he tells us. The difference, he continues to say, is found in the way he conducts these developments; “I take a lot of time as custodian of the land to build it out. It’s not like the phoenix rising quickly from the ashes. I take time and strive to be more environmentally sensitive. I use a lot of natural materials in the buildings that I build, materials that are indigenous to the area, and always maintain a profound respect for the environment.”

A sense of environmental and social awareness isn’t, of course, just about being a good citizen of planet Earth. There are obvious benefits to big business being vocal about their dedication to charitable projects - even if their actual dedication to such causes is decidedly smaller than they would like to admit. With Darby, however, this philanthropic method of conducting business is something that runs deeper than looking out for the short term gain of favourable publicity, and is a quality passed on to him from his father, founder of the Darby Family Investment Group. “My father started a children’s hospital years ago, so we’ve been very supportive of children’s causes as a group. In each project I do, I create a foundation that is a function of sales. For instance, at Christophe Harbour, around 0.5% of every sale goes into the Foundation, which has contributed $500,000 to the larger community to date. The more real estate we sell, the bigger that Foundation becomes.” 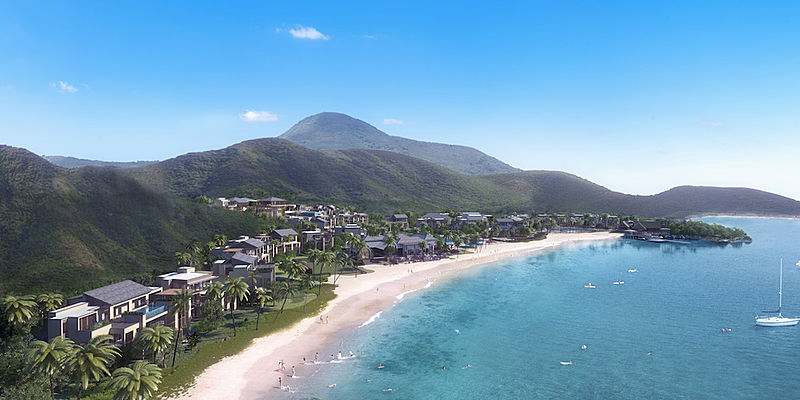 An additional quality Darby has inherited from his family which also plays advantageously into the development of Christophe Harbour is his strong connection with yachting. Not only has Darby been connected with sailing from a young age, but has co-owned the iconic 47-metre Perini Navi built Andromeda La Dea for several years. Darby elaborates, saying, “I started sailing at an early age, and just like I like all types of music, I like all types of boats, but I gravitate mostly towards sailing boats. I currently own Andromeda with a partner and we’ve owned her for eight years. She’s 25 years old this year, so she’s really starting to become a classic yacht. She was built by Tom Perkins, the original owner of Maltese Falcon. She had an incredible crew and it’s been a very useful tool to understand the yachting industry at every level as we proceed with building our own megayacht hub. And of course, she is great for entertaining and enjoying the Med and the Caribbean with my family.”

With the vast project in St. Kitts, this means that while Darby has enjoyed several excursions in the Mediterranean (“The Amalfi Coast, I love,” he says. “Sicily has become more and more my favourite place - it’s totally unspoiled. Of course from St. Tropez up to Monaco is always very nice. I mean, where isn’t nice in this region?"), unfortunately his time aboard Andromeda La Dea has been somewhat limited in recent years. He says, “The time that I do have on her is very special, but chartering her is a way I keep the crew active as well as a way to defer expenses on the boat. A boat like that tends to need to be operated, and the worst thing you can do is have a boat sit unused. Having her for charter for four or five weeks doesn’t take away much from my personal use of the boat, but it keeps everybody stimulated and happy.” 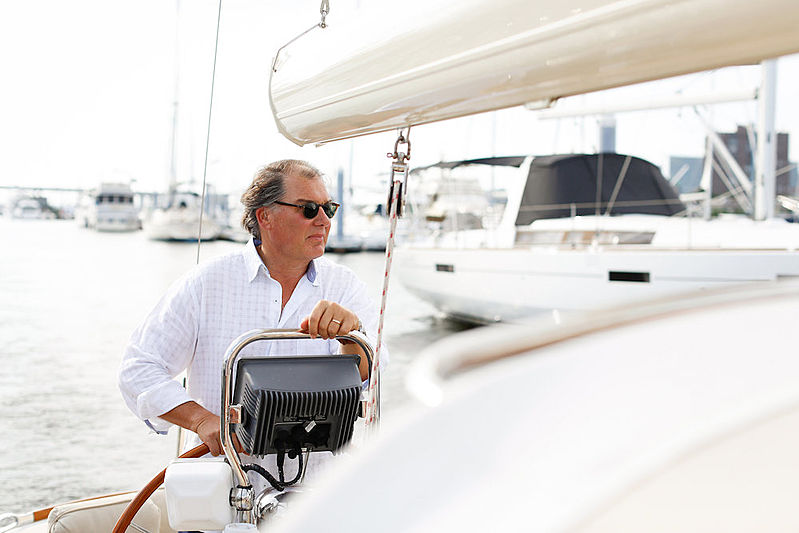 Lack of time is almost definitely a factor in the decision to list this impressive sailing yacht for sale with Northrop & Johnson, but Darby is realistic as to what he is looking for next - perhaps when a little more of his time is freed up. “I’m sure I won’t be boatless forever,” Darby explains, “but I think I would get something that I can keep down in St. Kitts in the future. Probably another sailing boat. I have a little boat that I’m going to take down there soon, a 36’ Hinckley - a picnic boat, which is great!”

We talked to Darby in more detail regarding the exciting development of Christophe Harbour and the island of St. Kitts, and what this means for the region.

Tell us where it all started with the development of the marina and community on the island of St. Kitts.

I ended up at St. Kitts with the Christophe Harbour project around 7.5 years ago. I had been working with a team of professionals for 25+ years at Kiawah, and I had already begun to look around to see what potential projects were out there. The opportunity came up with Christophe Harbour in the Caribbean and when I went there, the sheer beauty was incredible. It’s one of the few places in the world where I had a blank canvas: a total of 2,500 acres with tremendous beauty and physicality that I could bring my skill set and dedicate my team to, and hopefully replicate the core of what we do. We’re utilising our extensive experience in development, but it’s not about taking what I’ve done previously and plopping it down in St. Kitts. It's about building something unique and suited to this special island. 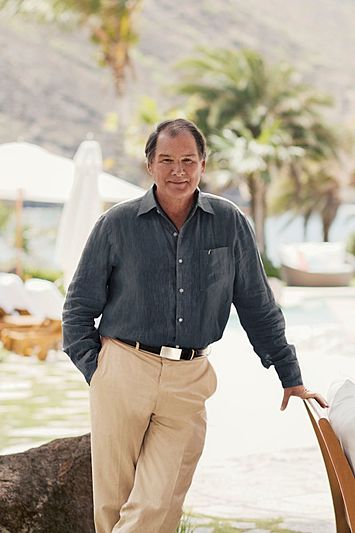 On the point of St. Kitts being relatively untouched, have you faced any criticism regarding the development of Christophe Harbour?

I think any time you have a foreign investment in a relatively under-developed island, you’re going to face some criticism. St. Kitts was completely agricultural to almost 2005, and the government at the time was trying to evolve the economy and saw an opportunity in tourism based on neighboring islands of St. Maarten and St. Barths.

We met with the government and discussed how we could best serve this process. Our development philosophy has always been “designing with nature” so it seemed like a good fit for us and for the government to do this project. I am proud to be a steward of this land and when I first looked at it, I could already see how the marina, the golf course, the hotels, homes would fit perfectly into the existing landscape. We don’t want to come in and "create" a place, for us it’s about taking the place that already exists and enhancing it.

Some people do not know all of the facts and make the assumption that I am coming in and making huge amounts of money. In fact, the opposite is true - this a rewarding but time and finance intensive, long term project. We like to build slowly, over time. 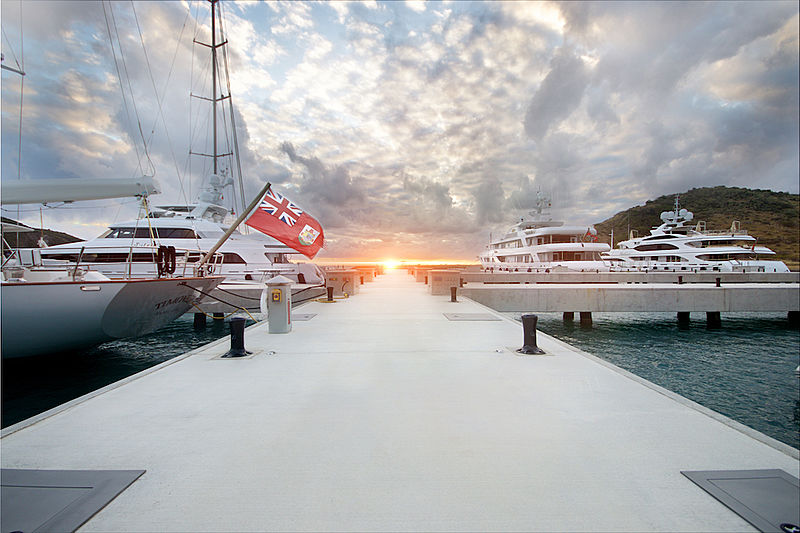 What are going to be the highlights of Christophe Harbour and why will it stand out in the region?

We’re based in a protected former salt pond on a peninsula, which is a real hurricane hole, so that is a definite attraction. Because of our orientation, the wind can be blowing 35 miles an hour and the water is still calm. We have 23 first class superyacht berths for boats up to 67 metres at the moment, with more planned. There are not that many places where a superyacht can go and safely dock whatever the weather in the Caribbean. I’ve actually had guests on my boat and we’ve been on other islands, not even with the motor running, and it rolls so bad they get sea sick!

The marina is completely state-of-the-art; the latest and greatest in the Caribbean, with all the things you would expect to find in a modern marina: a modern fuel farm with in-slip fuelling, WiFi, black water pumpout, daily refuse collection, 24-hour security with single, controlled access point, concierge services and onsite transportation, as well as VIP clearance for yachts and private aircraft and access to nearby private jet terminal, YU Lounge.

SYT: Where do you see the development of St. Kitts in the foreseeable future?

The next two to three years are probably going to be the most exciting. With the marina done, we have also just completed the largest fuel farm in the Caribbean, so we will be able to fuel up just about any boat. We can do 40,000 gallons a day. 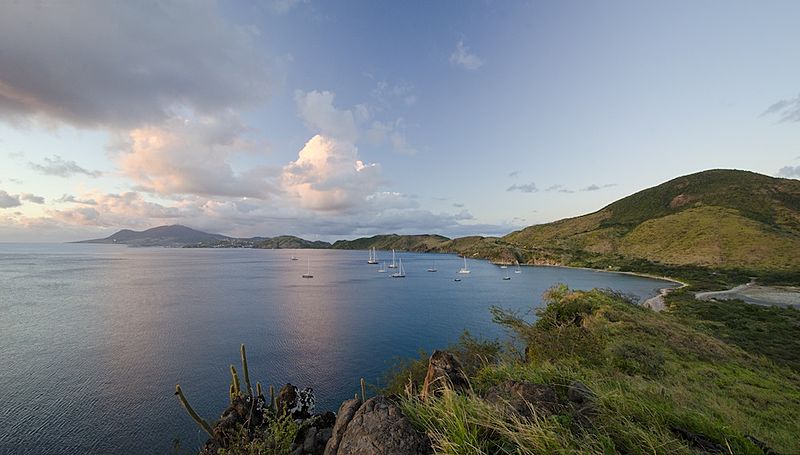 The Park Hyatt hotel will be the only brand new hotel built in the Caribbean in the last 10 years. You’ve got this epicentre of flights coming into the international airport on St. Kitts and that is only going to improve. These flights bring a high quality clientele which fuel restaurants, retail, and investment of other sorts, in both St. Kitts and Nevis, so the next three to five years is going to be very exciting for all of us. I’ve laid the foundation and people can now see the vision.

The full interview with Buddy Darby was published in the latest edition of the SuperYacht Times newspaper. Subscribe now and never miss another issue.

Latest issue of the SuperYacht Times out now