When Hatteras was acquired by Versa Capital Management in 2013, the brand was in need of a new direction after feeling the effects, like many marine industry players, of the economic disruptions that occurred in the years before. Today the trusted American brand that has become synonymous with the world of sportfishing is lead by a man with experience in transforming businesses into their true potential form. We met with new Hatteras CEO who joined in January this year, Kelly Todd Grindle, and found out that not only is he business savvy, but he is also a true outdoorsman and sport fishing fanatic. 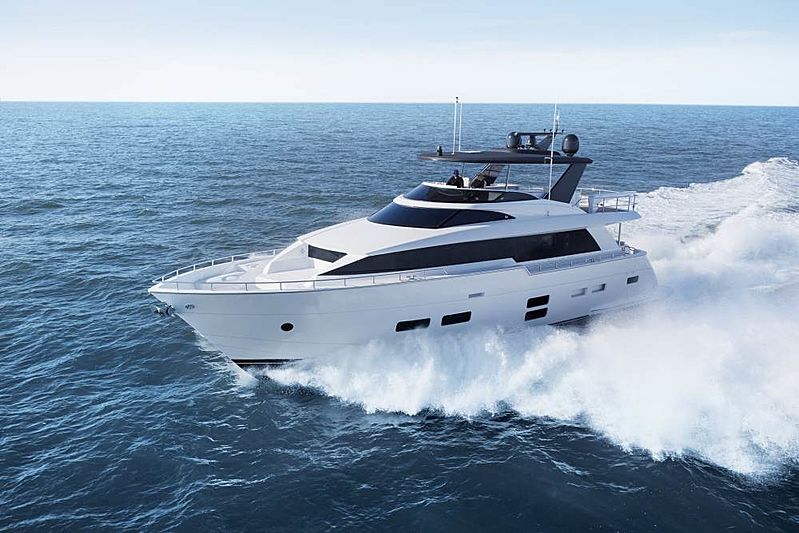 “I enjoy all types of outdoor activities, from skiing and hunting to motorcycling and scuba diving, but fishing is my passion,” Grindle says. A business-minded individual and outdoorsman at heart, he certainly seems like just the man in charge that Hatteras has been searching for. Grindle’s background is in the running of complex, multi-branded organisations, turning these companies around and securing their future along with the livelihoods of all their personnel. “I spent 16 years working at Johnson Outdoors and ran their marine electronics, diving and outdoor watercraft groups,” he said. “From Johnson Outdoors, I moved to Vista Outdoor to lead their outdoor products group, a billion dollar plus business comprised of over 40 brands.” 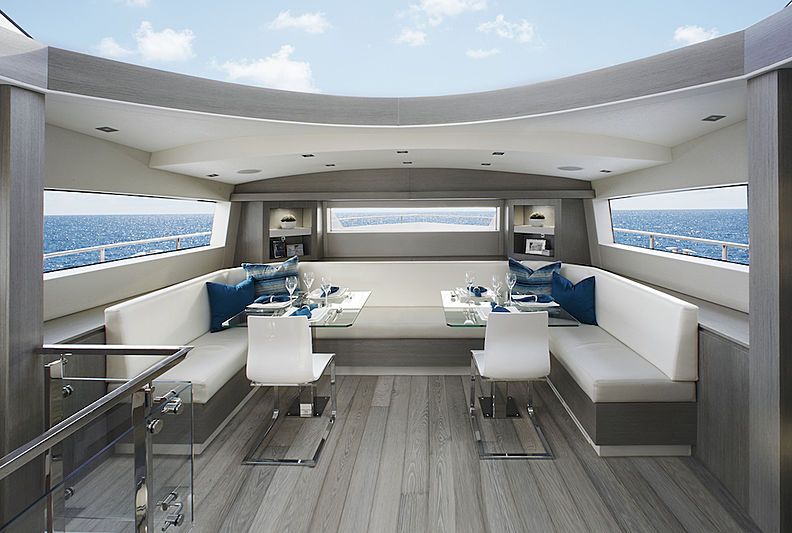 So he certainly has the experience, but Grindle’s job might be easier than expected. Hatteras has enjoyed good growth during the 2016 financial year which, according to Grindle, can be directly attributed to the number of new models on offer to the market. “The new models have generated a lot of interest. The sales of the 70 Motor Yacht, for instance, have done really well, and it is the most successful launch of a new Hatteras in over a decade!” No doubt that the reawakening American market, too, has had a role to play in the growth the brand has been experiencing of late.

In many ways, Hatteras can be used as an accurate thermometer to determine the state of the American yachting market. Enjoying an American client base that spans several generations and offering a yachting solution to nearly every client requirement up to 100 feet, this North Carolina yacht builder appeals, perhaps, to more first-time yachting families than any other. Hatteras’ competition is something that Grindle keeps a close eye on but also knows that when it comes to offering a thoroughbred American product, there are few alternatives out there. “On the sportfish side, there is Viking Yachts, no doubt. In terms of motor yachts we are competing with a number of international builders such as Ocean Alexander, Princess, Azimut and Sunseeker to name a few. But although our motor yacht products can be put in the same class as these companies, very few can offer a truly American-built product in the size range that we operate in. And we have seen this having an effect on our sales as many of our clients are Americans who above all else demand quality.” 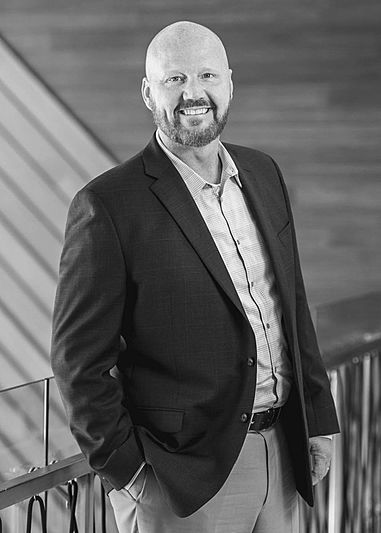 So what is it that sets a Hatteras apart and how has the brand gone from the deep sea fishing arena to cocktails and canapés? “Although we entered the luxury motor yacht scene many years ago, the brand today still attracts one distinct type of customer: A customer who values seaworthiness, ride quality and craftsmanship. It is in these core traits that the DNA that can be traced back to Hatteras founder Willis Slane, who in 1959 fished the rough currents off of the Outer Banks of North Carolina. Slane was the first one to build a fibreglass boat over 40 feet and also combined seaworthiness, fishability and luxury into a single product giving birth to the modern yacht market. So as the product lines have evolved to cater to specific customer uses and on the surface they seem quite different, they are in fact made of the same DNA.”

With even more growth expected as the company gets ready to launch the much anticipated 90 Motor Yacht, how does Hatteras keep up with demand when orders start flooding in? Delivering such a high-quality and custom-made product cannot be achieved by simply bussing in a new batch of employees. This is something that Grindle understands all too well and whose foresight even predicts the implementation of a training program to ensure skills can be passed down, the Hatteras way. “We would hire people ahead of any busy periods so that we have enough time to train them and make sure they will be able to carry the Hatteras spirit the same way our workforce has done over the years. In fact, we are working closely with local trade schools to create programs whereby we can mentor future craftsman that can meet the expectations of our demanding customers.” 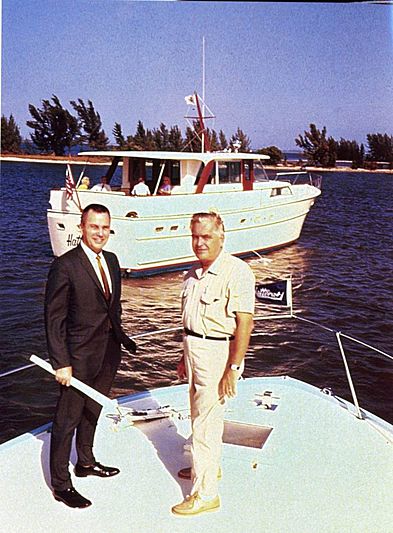 The New Bern facility, however, is no stranger to peak periods as Hatteras once operated at a much larger scale than we see today. And it is the sheer size of the plant, and confidence in the brand from its backers, that allows Hatteras to build on speculation the way it does. Grindle understands that part of delivering a good product is having a product to deliver, and it is for this reason that the shipyard constructs certain models ahead of having been commissioned by a client, but also why getting them out on the water and testing these machines keep delivering results. “We find that getting people on board and out to sea is sometimes the best way to experience the Hatteras advantage in ride quality. The first 90 Motor Yacht, for instance, is being built on speculation as a demonstration model while hull number two has already been sold to a client and is now under construction. We don’t, however, have dealers stocking our boats like other brands might. So we invested significant capital to build boats on spec and for demonstration.” 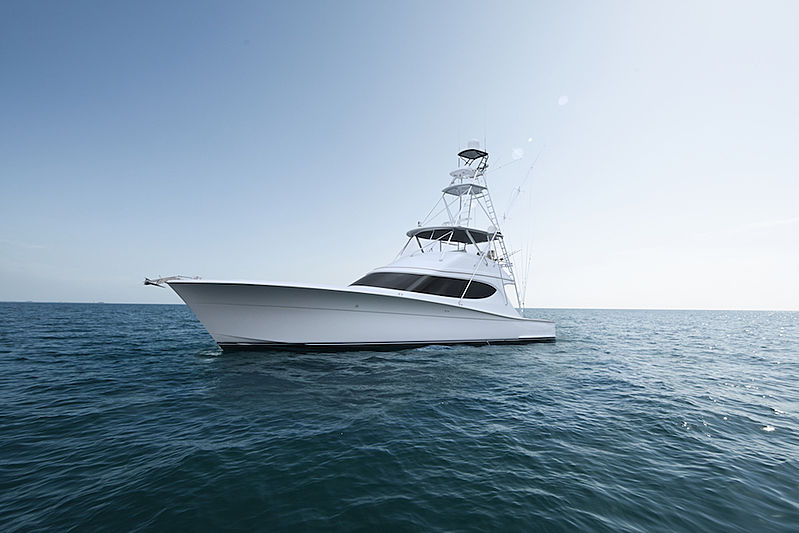 The way the company operates is not the only aspect that has been on the change over the past few years. With its rich history and immense market experience, the brand has evolved into what some might consider as ‘too familiar’. But, says Grindle, there certainly has been a shift in the way Hatteras is being perceived by the market as of late. “I think in the past some might have seen the brand as a bit conservative. I feel it is models such as the 70 Motor Yacht, which has a bit more of a global look and feel, has played a big role in changing consumer perception. I think today we are finding a good blend between delivering a product with international appeal while retaining that American feel and onboard features.”

This article was featured in the most recent edition of the SuperYacht Times newspaper. Subscribe now to receive your copy straight to your door and never miss another issue!