Eddie Jordan is a man who needs little introduction to most. Formula 1 superstar, television personality and entrepreneur, the 68 year old Jordan has lead a fast-paced life filled with enough envy inducing experiences to last several lifetimes. One of the leading ambassadors of the Sunseeker brand, he is also one of the most vocal superyacht owners in the industry amidst the more favoured ownership approach of total privacy. 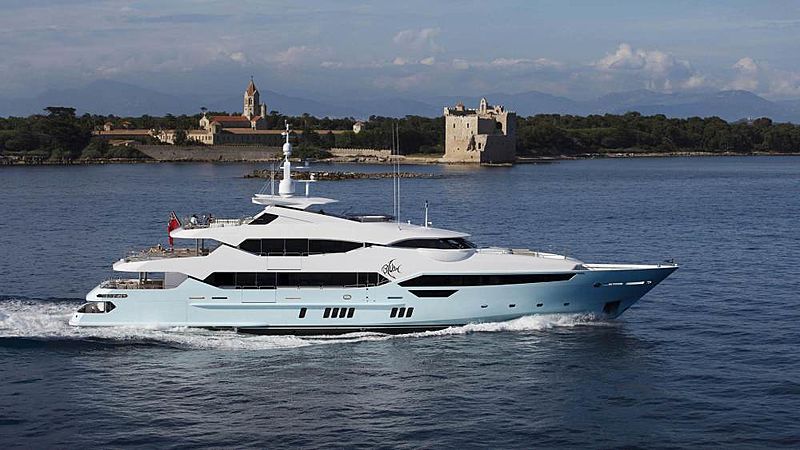 Jordan’s connection with yachting did not come as a consequence of fame and fortune. Born by the sea on the east coast of Ireland not far from Dublin, boats are in his blood, he tells us, and he spent the early part of his formative teenage years competing on board an International 420 Class Dinghy. “I did the Irish Championships in the 420, which then became the 470 which was the Olympic class, and then motor racing started for me,” he says. “I’ve always needed to live by the sea though, and it was far too many years that I didn’t. I feel a different person now that I’m back by the sea for the past eight years or so. It makes a big difference.”

Times have changed quite significantly since Jordan’s sailing days on board these 4.2 metre vessels. Since taking delivery of his very first Sunseeker motor yacht in 1986, he hasn’t been a year without a Sunseeker superyacht in his life, with his current model, the 47.25 metre 115, Blush, the biggest yet. Rising up the size ranges as and when they became available over the years, Jordan’s strong relationship with the yard has resulted in quite a number of Jordan’s vessels having also been the very first of its kind, with a close cooperation meaning that Jordan has had the unique opportunity to be influentially involved in various aspects of both the design and build of these vessels almost from the very inception.

Speaking of this close relationship, Jordan says, “I’m a ridiculously loyal person - that’s a very important factor within my life. Having said that, with Sunseeker it’s not just about loyalty. The brand suits my needs, and I really didn’t find it hard to align myself with the company. The quality of the production is great, as is the design. They meet my expectations. They also let me change things around and do what I want to the boat, so that’s also why I have invariably always bought the first one in any series. Robert Braithwaite (Sunseeker Founder and President) became a great friend, and so I would ask him if we could incorporate something here or there.”

Though one of the most well-known owners of Sunseeker’s motor yachts, Jordan certainly didn’t throw away his sailing roots in his later years, and in addition to a number of Sunseeker motor yachts, he has also enjoyed an extensive collection of Oyster sailing yachts. Explaining his connection with sailing, he says, “Sailing is where I came from and when I left motor racing, sailing is one of the things I actually wanted to do. I wanted to sail around the world and be a circumnavigator. I didn’t ultimately go into doing that professionally, but I bought an Oyster 885 and I still race it today.”

Hearing Jordan speak of his experiences sailing, it would seem that this is really the true passion of Jordan’s heart. So we asked, why the focus on motor yachts? The answer was logical: just like riding a motorbike and driving a car, there is a stark difference between the two, and Jordan, like many others, uses his sailing and motor yachts for quite different experiences. “You really need to live the moment when you’re riding a nice motor bike,” he illustrates. “There’s a certain thrill there. With a car, you’re inclined to just get in it and go to wherever you’re going. That doesn’t mean I’m blase about motor boats, though. A motor boat satisfies all my needs. Particularly when I was still motor racing, for example, because I needed to be sure I could be back in time to head off to a race or a meeting. Sailing is a completely different concept. You get in and time instantly becomes less of a factor.” 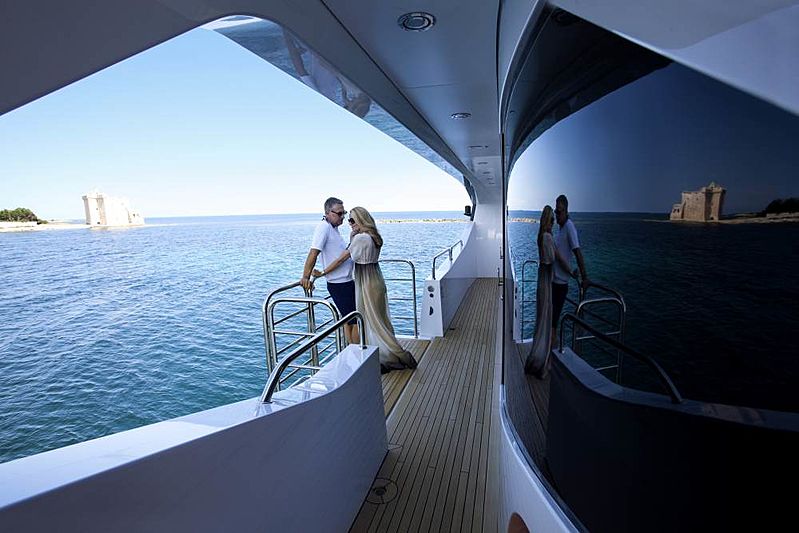 Time - or lack thereof - was just one of the factors in Jordan’s decision to specifically build his latest motor yacht, Blush, for charter… as well as the self-professed tendency to be constantly looking for the best bang for your buck. Originally factoring in from six to eight weeks per year for personal use on board Blush, Jordan told us that he quickly realised he didn’t even need that, with his schedule filled to bursting with his various vocations in life from Formula 1 to television to his rock n’ roll band. Speaking of the decision to charter, he says, “I’m a bit of a serious pikey… In other words, I’m from an old school of thought. I saw buying Sunseeker’s as a business where I could enjoy the asset. As an asset it needs to work, but not to a detriment to the time that I want to spend on board. I use the sailing boat for my wife and I and a couple of friends - not really for family - so Blush is really a family boat for me."

“She’s bigger which suits having more people to look after. But the requirement that I thought I would need Blush for six to eight weeks a year… well, actually, I don’t need her that much. Therefore it’s simple. If a charter comes and it suits, we take it, and I will use her occasionally if she is not chartered. But generally speaking, she was built with charter in mind. It probably suits me better this way.”

Regardless of having enjoyed three successful seasons with Blush, Jordan tells us he’s now looking for a new boat, this time something a little different. “There’s no doubt I’m looking for something different. I might go for an open boat… I’d like to spend some time looking at that kind of thing. For once I may actually go down in size. I think people have gone loopy in regards to the increasing size of these yachts. The size of your wallet seems to be represented in the size of the yacht. People get a little bit carried away, and of course it’s nice to see 90 metre boats - Lionheart and M/Y A are incredible boats, for example.”

With looking for something different, does that mean a departure from Sunseeker after 20 years of continuous business? “I might have to go somewhere else,” Jordan concludes, “but I hope not - they’re good people. I think if there wasn’t something there that wasn’t exactly right, they would try and find a way of getting that to me.”

Blush is currently listed for sale with Camper & Nicholsons at an asking price of £19,500,000.

This article was featured in the SuperYacht Times newspaper. Subscribe now and never miss another issue!