Shortly before Willy Persico passed away earlier this year aged 79, the founder of Southern Wind secured the future of the company by quietly passing the reins to a new executive group comprising three Southern Wind owners and his top managers.
One of the new investors is Juan Ignacio Entrecanales, Executive Vice Chairman of the Acciona Group and owner of the Farr/Nauta SW105 Kiboko, his third Southern Wind yacht. SuperYacht Times sat down with the Spanish owner and industrialist during the Monaco Yacht Show to talk about sailing and his entry into the boatbuilding business. 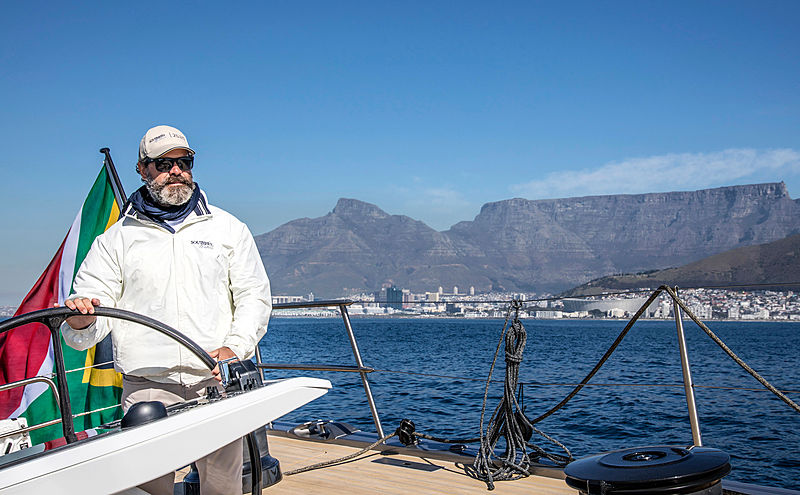 Photo: Justin RatcliffeHow were you introduced to the Southern Wind brand?
My love of sailing began with my father. Like many of his generation, he worked his way up the ownership ladder and always insisted that you learn to sail in small boats. I have three siblings and it got to the stage when we all wanted to use our father’s yacht in July or August, so I eventually decided to buy my own. I remember visiting Farniente, a Reichel/Pugh SW78, in the south of France with my dad, and I also had a friend who owned a SW72 in the Bruce Farr series.
I did the usual benchmarking with other builders, but Southern Wind provided just the right combination of racing performance and cruising comfort in a semi-custom package for my needs. My father had started with an 8-metre boat, so when I told him I was buying was a 72 footer – a big boat 20 years ago – he was shocked. I followed up with a 94’ and now the 105’. Incidentally, all three have been called Kiboko, which means ‘hippopotamus’ in Swahili. The guys at Southern Wind weren’t convinced it was a good name for a racer-cruiser, but they changed their minds when someone pointed out that the hippo is considered the most dangerous animal in Africa and can actually move very fast! 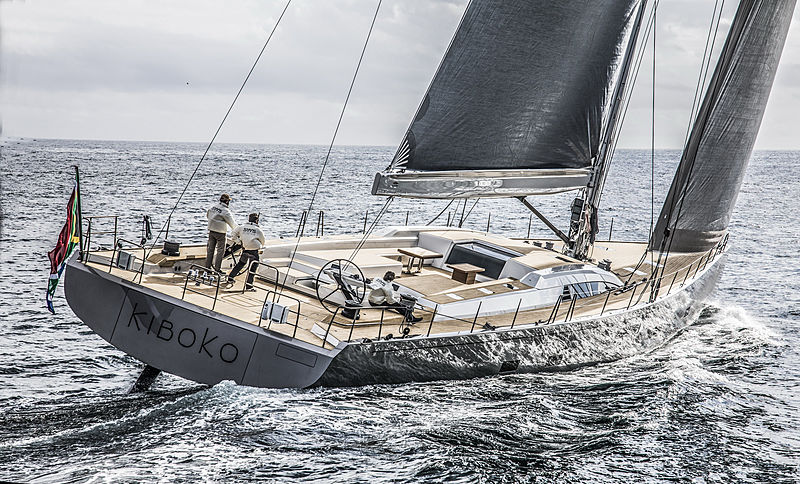 Photo: Southern Wind shipyardHow do you like to use your boats?
I race a few times a year. I’ve done the Palma Superyacht Cup, Les Voiles de Saint-Tropez, the Loro Piana regatta in Sardinia and the Giraglia. I’m told I should do the 600 Migila around Sicily, but I prefer the one-day racing. I’m a little nervous about breaking the boat in bad weather during the long-distance events. After the racing you always see sails being shipped off to be repaired, so in my brief, to my crew, I always tell them ‘Don’t damage the boat and don’t get hurt’ – in that order!
Then there’s the weekend cruising with my family on the Costa Brava where we have a house, and a couple of weeks in August in the Med. The important thing is that you can totally disconnect from daily life when you’re on a sailing yacht, much more than a motor yacht, and it brings the family together. At home you don’t see young people these days; they’re always in their room with their laptops or smartphones. Sailing is a great way to spend some quality family time and actually sit down for a meal together.

Have you ever considered doing the transfer from the shipyard in Cape Town to the Med?
Not really. It’s a very long voyage and I’m not retired yet, which is how I’m able to pay for my boats! I toyed with the idea of doing the trip on the 105’ as far as Saint Helena that has a flight connection to Namibia, but sailing in delivery mode can be pretty uncomfortable and the boat wasn’t ready in August when I could take time off work. I would like to travel further afield, however. I haven’t crossed the Atlantic yet on my own boat, although I did it with my father, who’s sailed the world. I’d also like to cruise places like Maine, New England and Nantucket in the US. The west coast of America is too far, and northern Europe too cold. 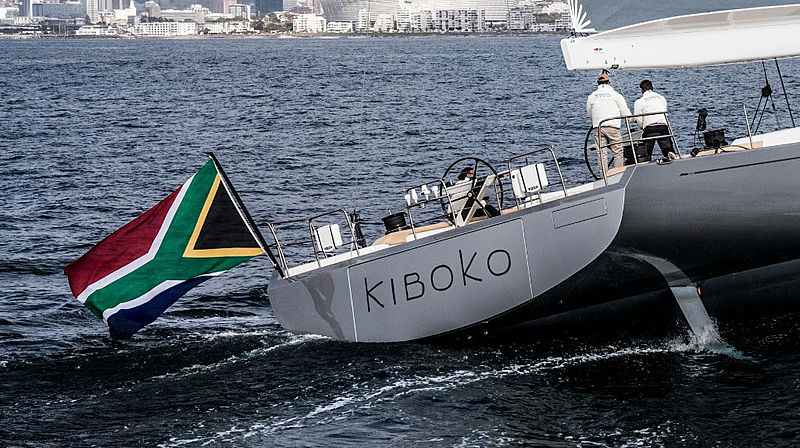 Photo: Southern Wind shipyardHow did the opportunity to invest in the shipyard come about?
Willy had often talked about it when he was looking to secure the future of the company as he got older. My family’s business is in construction and renewable energy, and I knew nothing about boatbuilding. But I knew it was a high-risk business with peaks and troughs – you just have to look at how many yards have gone belly up to realise that – and I didn’t want to go into it alone. When two other shareholders expressed interest, Andrea Micheli [Southern Wind’s commercial director] gathered us together and I decided to go for it. We share a 75 per cent stake in the company, while the remaining 25 per cent is controlled by the Southern Wind management. I’m actually very proud to be a stakeholder in the brand.

How important is it that your co-investors are also Southern Wind owners?
I would say it’s very important. We’re all passionate about sailing and we’re committed in the long term to the brand. I’m Spanish and my co-investors are from northern Europe and Italy, but we want to keep the uniquely Italian flavour of Southern Wind. We can also draw on our very different fields of experience in the industry. I’m not involved in the day-to-day running of the shipyard as we have a very good management team for that, but I am interested in how we can sell more boats. Building them is a high-tech business, but in general, it has been based on artisanal rather than industrial skills, so I want to look at things like how we benchmark with other yards and the tendering process, which is what I do all the time in my own company. 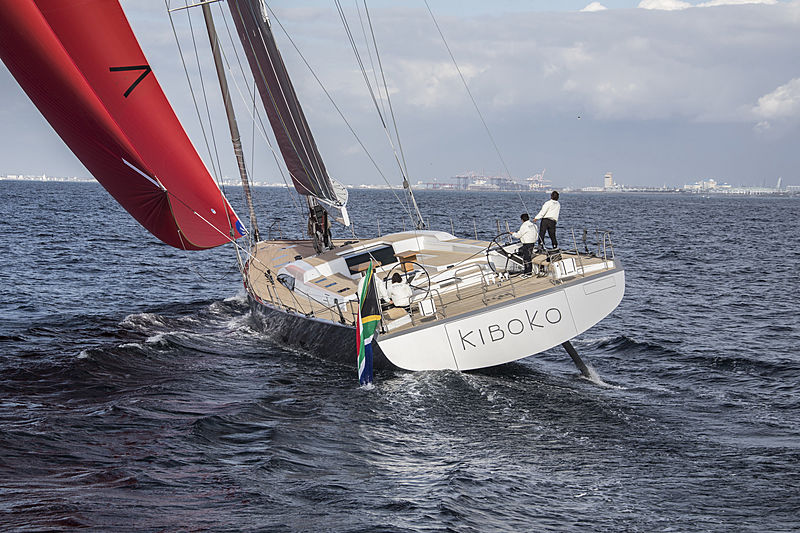 Photo: Southern Wind shipyard Where do you want to see Southern Wind in five years’ time?
I’ve watched the company grow as the boats have got bigger, their design has developed and the carbon composite technology has evolved. Brand awareness has also grown and the market now understands that we build to a quality that perhaps surpasses our competitors. But it’s important that we don’t move too fast: success that comes too quickly can kill a company, and I don’t want to find ourselves having to build in a rush or at a loss. Of course, we want to sell more boats to have the working capital to reinvest in the company, but we have to maintain build quality and schedules at the same time. Not forgetting our responsibility to the workforce and the 300 personnel in Cape Town, whose livelihoods depend on sensible management and sustainable growth.

Who are the mentors you admire most, whether in the sailing or business worlds?
I think Willy has been inspirational in both. I remember when he came to my office in Madrid to discuss the 105’ and the way he convinced me to buy the boat was a master class in salesmanship! We shared a lot of common ground and, like me, he believed that a boat should be a boat and not a floating palace. In fact, one of the things I like most about Southern Wind is that they build bluewater boats that are beautiful and contemporary but not flamboyant. 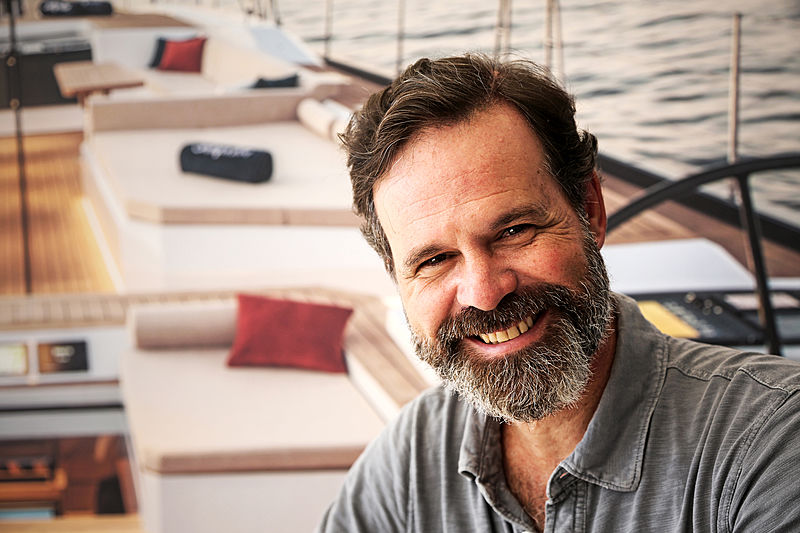 Photo: Justin RatcliffeAnother influential person in my life was my grandfather, who founded our family company and was very modern for his time. I have a letter he wrote in 1941 encouraging his employees to come forward with new ideas or improvements and, if they were taken up, they were paid for them. A true Renaissance man who read widely and thought a lot about things, his forward-thinking brand of entrepreneurship has stayed with me to this day.