Felix Buytendijk is one of Holland’s longest contributing members of the design community, with over 32 superyachts of 24 metres and above built to his designs. Unlike many of his peers in the superyacht industry, Buytendijk wasn’t born with an immediate affinity with yachts. Though he had a keen interest in water sports, he confesses that before he established his architecture and design studio in the Netherlands in 1980, “I didn’t have a clue.” 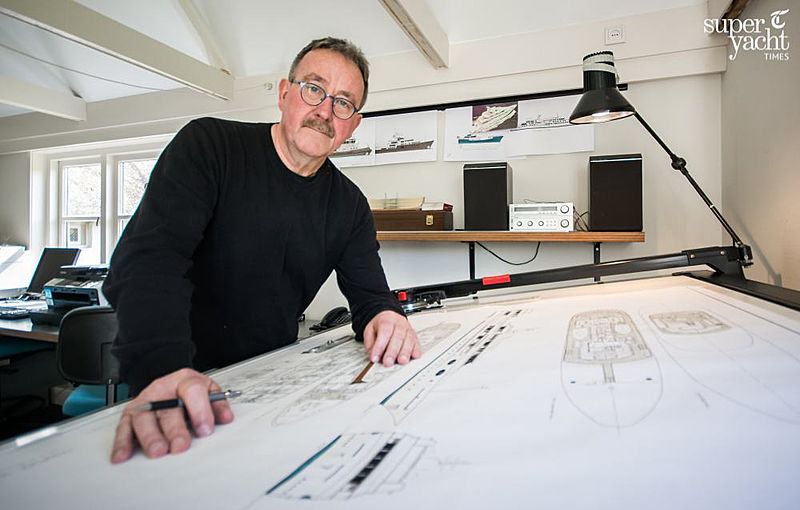 Explaining his coincidental entrance into the industry and the beginning of what would be a decidedly fruitful venture, he says: “In ‘82, I was hired by Diana Yacht Design as a freelance stylist and since then I always had a part of the yachting business. I became passionate about the industry. These were the early days. Imagine in 1982, in Cannes or Monaco all the vessels were classics - though they were new at the time. The first to do really exciting stuff was Jon Bannenberg and Tim Heywood. I met them in 1984 when we were cooperating on an Amels project with Diana.”

Although he has completed many modern vessels, one of Buytendijk’s most successful designs is Jamaica Bay, a project spanning three superyachts that maintain a classic motif from one yacht to the next. “One of my first projects was Jamaica Bay with Amels. Canoe stern, very classic, mahogany interior.”

Delving into the origins of the Jamaica Bay trilogy, Buytendijk elaborates: “The first was for a Spanish client in 1984, that’s where it started. She was sold to somebody from the U.S. After some years they approached me and wanted to find a suitable vessel and change it into a Jamaica Bay lookalike. She was called Leocrie III, with a complete interior by Disdale. We ripped most of the interior out and did some adjustments on the outside, and that was Jamaica Bay II for some years (now known as Legend - Ed)". 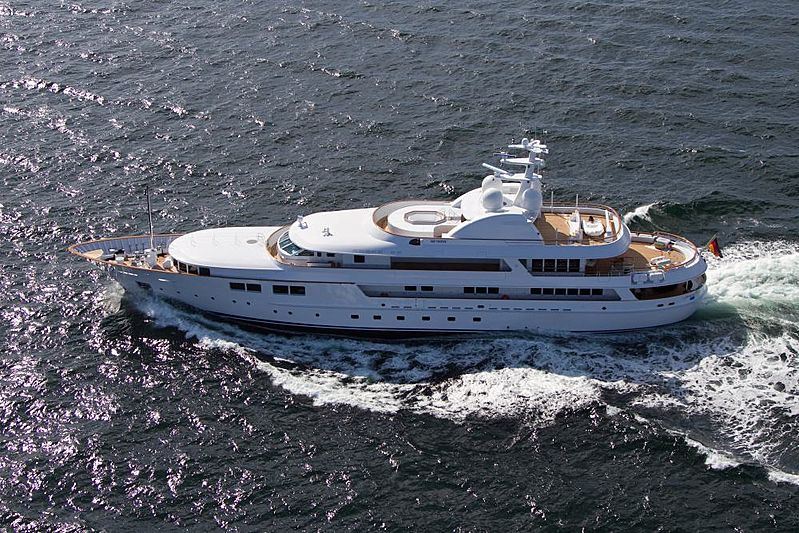 “Then they approached me again. They had created a partnership and wanted to go to Italian harbours where the maximum dimensions are 60 metres, so they wanted a 59.95 metre Jamaica Bay. Number three was done with Nobiskrug and completed in 2010. It’s a little bit more luxurious, because one of the owner’s wives was involved. So that was a good one for me, Jamaica Bay.”

Another of Buytendijk’s projects that has generated substantial interest is Desert Rose. Though this 100+ metre concept has never been commissioned, what she wants in fruition she makes up for in fascination, with a mysteriously confidential backstory. He divulges: “It was a competition for a Saudi Arabian client, but I never met him. There were five designers involved, but it was all top secret. I made it to the second round, where this was skipped as being too futuristic looking.” 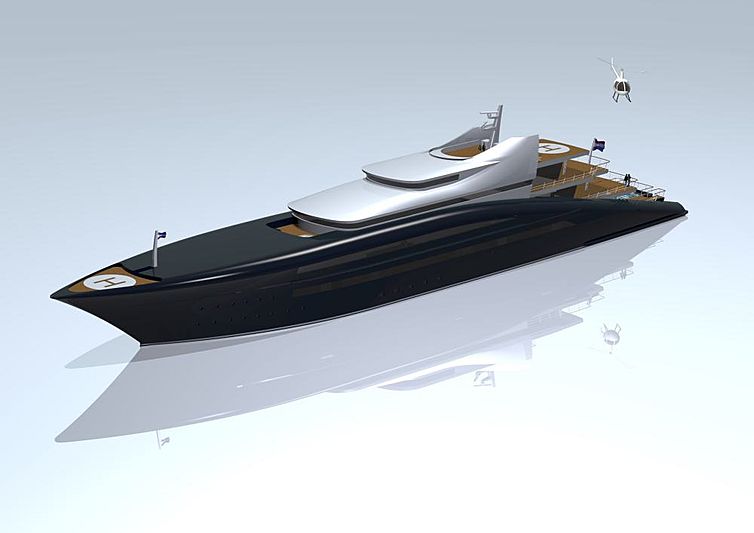 Indeed, the as yet unbuilt Desert Rose truly is futuristic and a clear indication of her creator’s versatility. Desert Rose, interestingly, is also the design that Buytendijk immediately answers when we pose the question, “Do you have a design you really hope gets built?”

After pointing to a rendering of Desert Rose, he continues, “I can tell you that most of my designs are never built - but that’s the interesting part. It doesn’t have to float, it doesn’t have to reach a certain speed… You’re not restricted and you can really do your own thing. This was really my thing.” It hangs proudly on the wall of his cosy home-studio, a nod to his design talents, a reminder of a fantastic experience, and an emblem of still chasing the dream to see the lines on the paper brought to life.

New builds aside, Buytendijk’s favourite projects are refits and extensive conversions. Why? Both types of builds simplify the design process whilst simultaneously applying just enough pressure to never allow for tediousness. “The nice thing about refits is that it’s a short time span,” he explains. “There’s always pressure. With the big motor yacht projects there are some years within that time span that, frankly, are really boring. With a refit you have everything prepared, you do your work well, and then the next spring they want to be back in the water. I love that.”

The 2012 conversion of the 36.4-metre Lars is demonstrative of this short and interesting turnover that Buytendijk favours. “Lars was a commercial tugboat with icebreaker capabilities,” he tells us. “I did a 35 metre for the owner years ago in Italy. He went around the world and eventually came back to me and said he wanted more; a yacht style inside, but very commercial on the outside. That was a process of around a year. It is completely different.” 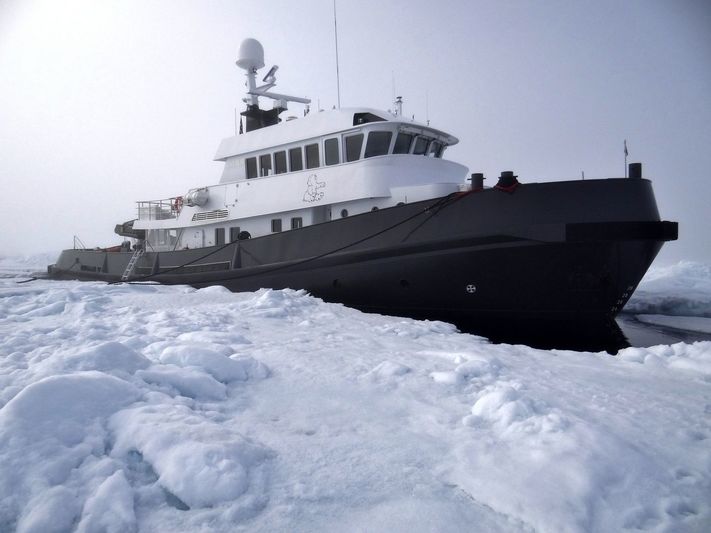 A stark contrast to the relative ease of refits (and perhaps another reason for his preference), was the 100-metre superyachtAttessa IV, completed by the Japanese shipyard Evergreen in 1999. “Diana did the specifications, and I did the styling and interior design. The owner purchased a shipyard in Japan to do smaller container vessels and this private yacht. He said they are able to build a vesselin seven months, so he expected the yacht in a year. I think that became four years.” 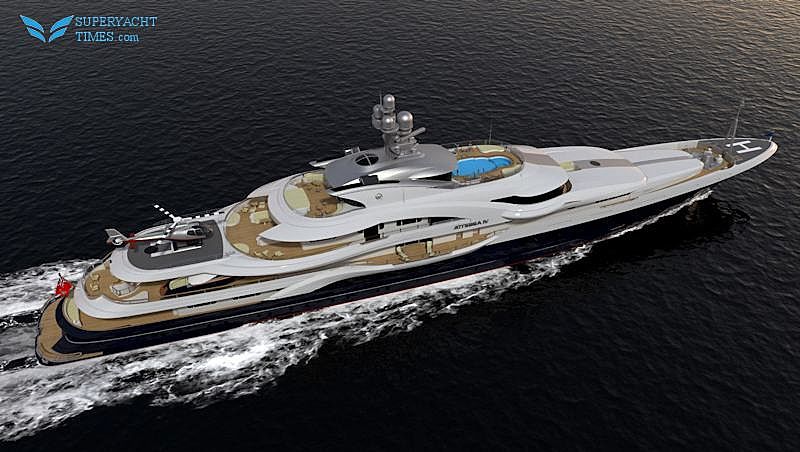 Speaking of the difficulties that came with of working on that project - regardless of the obvious complexities of creating one of the largest superyachts in the world - Buytendijk told us that the biggest hurdle was the cultural difference between the yachts’ European designers and Asian builders. He says, “The Japanese are very friendly people, but Asia is a completely different world. If I said yes or no, people would often move around the subject. No hardly exists: it’s yes, but! Or yes. So it was complicated.”

With four projects on the drawing boards for Buytendijk consisting of a 28-metre trawler, the Hakvoort 38 metre Soprano, the 62-metre **** at Amadeus Marine Philippines, and an interior refit of the 37-metre Lars at Balk Shipyard, the fact that Buytendijk says he is slowing down is surprising. But he is, and his small, relaxed studio exudes comfortable, understated success. “I used to work here with two freelancers, so I’ve taken it down a gear,” he tells us. “Now I do the fun stuff that I really like to do. I will continue, I’m not going to stop.”

There’s more to this slowing down than merely creating a more comfortable, less work-dominated life. Buytendijk is consciously making room for the new generation of designers. He concludes, “My philosophy is that there are a lot of new designers coming and you should make some space. I worked in an architectural office before I went on my own. When I decided to leave the company the boss gave me a project that I was working on. A town hall. He told me to finish it and send them the bills. It was so warm. He really gave me a chance. So that’s my philosophy. At a certain point, you have to make space for the new ones to come up.”