Home > News > Insight: Why does the US love sportfishers?

Many American anglers  - and there are many American anglers! - find it utterly normal to set the alarm for 4:30 a.m., hit the docks by 5:00 and be running the seas before the sun hits the horizon. Not only normal, it’s the time of their lives. And more often than not, they’re chasing down sailfish or tuna in something like a Viking Yachts 72 Convertible, a Hatteras Yachts GT59 or perhaps a custom Carolina build. They are casting from a sportfisher yacht, that is, and there’s a reason these boats’ namesake is the activity they’re built for. While sportfisher presence in Europe may be low, there’s plenty of justifications for their popularity on the other side of the pond. 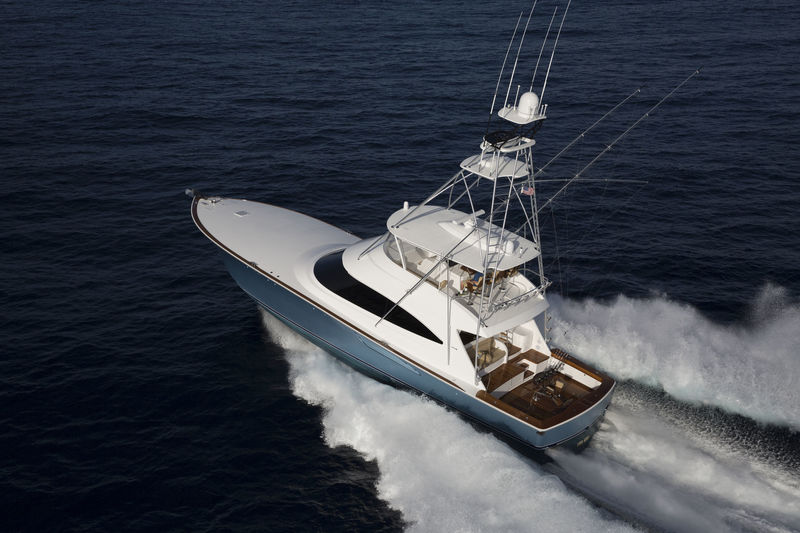 Photo: Viking YachtsTo begin to understand the prevalence of sportfishers in the U.S., one should first understand the prevalence of fishing as a serious sport. First reason? Something as simple as the actual amount of fish in US waters. “Fishing is so popular because of the variety, the accessibility and the number of tournaments that pop up all the time,” says Pete Frederiksen, former marketing director at New Jersey-based Viking Yachts. Indeed, the waters off the east coast of the United States, Florida’s gulf coast and the Florida Keys are brimming with sailfish, tuna, grouper, kingfish and multitudes more. Plus, from Florida, it’s just a short hop to the Bahamas and the Caribbean, which also boasts an impressive and exciting marine population ranging from blue marlin to bonefish. 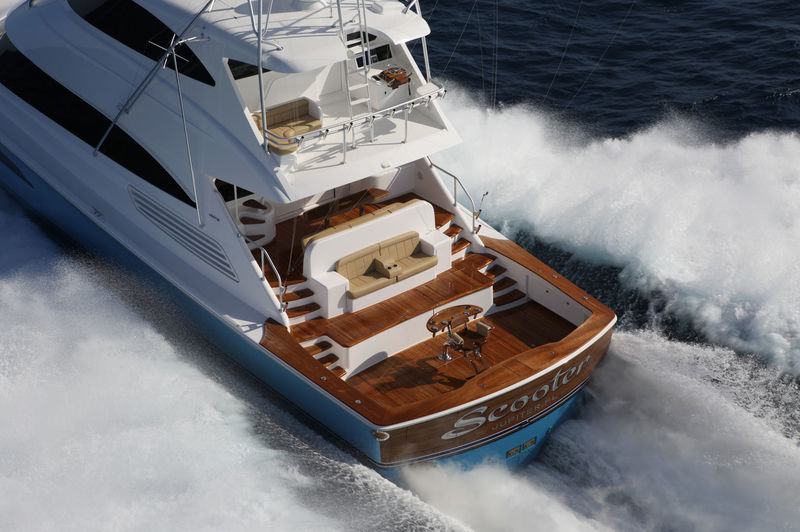 Photo: Viking YachtsThe drive behind the hobby seems to run deeper than just well-populated fishing grounds, however. “Catching fish, going to fish, the hunt — the whole process is alluring to anglers,” says Viking’s Chris Landry. This sport is a test of will and skill, from researching weather conditions to preparing the bait and equipment to running your boat 80 miles off shore at 40 knots. Then, of course the time spent in the fighting chair, making the catch. And in the States where hunting is a time-honoured hobby and large part of many people’s lives - particularly those in the South East - fishing tournaments abound that can test these skills and give you something competitive to drive you even further are, understandably, relished.

Once someone gets into sport fishing, they tend to be gung-ho, Frederiksen says. So, it makes sense that enthusiastic anglers would be just as gung-ho about the boats they do it from as well. Beyond any other vessel you can hang a line off, sportfishers are marketed as having all the bells and whistles an angler needs to be the best — and in a stylish, speedy, luxurious package. According to Landry, what makes a sportfisher a sportfisher is a large, comfortable cockpit and plenty of stowage on board. “The more rod storage, the better,” he adds. Furthermore, fish boxes and dry compartments are a must, as well as ample live well space for bait. All stowage areas should be accessible, and cleats and chocks are recessed to avoid any snagging. Sportfishers must also have a long range, capable of routinely travelling to fishing grounds that may be 100-plus nautical miles offshore, plus abundant fuel capacity, high-speed capabilities (they can top out in the 40s knot range), a smooth ride and seaworthiness. 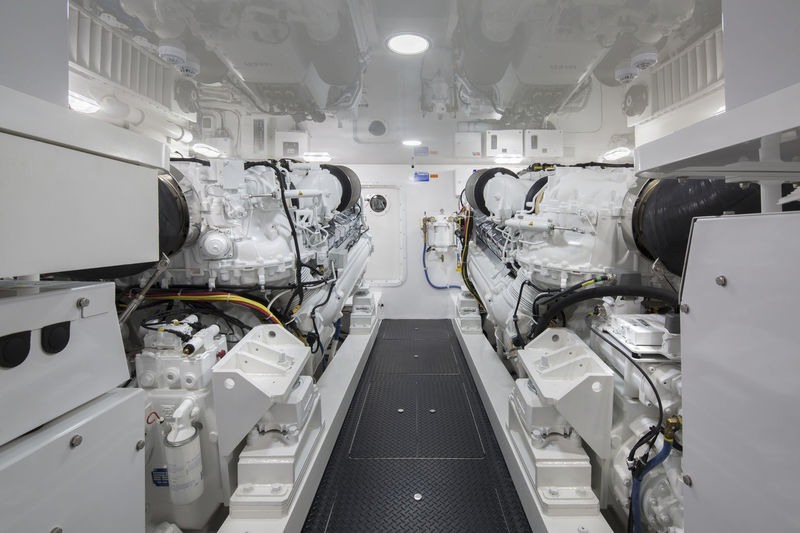 Photo: Viking YachtsThat smooth ride and seaworthiness result from a hull design that’s been fine-tuned for year, says Randy Ramsey, founder and president of Jarrett Bay Boatworks, a North Carolina custom sportfisher builder. “Basically, the boats have sharp deadrise forward that reduces as it goes aft to considerably less at the transom. This allows the boat to cut through the seaway but provides a stable platform at slow speeds.” Not to mention, it creates that sleek, staple sportfisher look.

Finally, the ability to be set up for tournament fishing is significant because “if you can fish alongside the best people that do this and win, you know, there is certainly prestige associated with it,” says Ramsey. “That’s why people fish tournaments: they want the money, but they also want the trophy.” Naturally, that pursuit of prestige influences an angler’s choice of boat. “People build a boat with me [because] they want the finest boat available,” he says. “They want it efficient with a great ride and most likely they will pass everyone in the ocean because they will be one of the fastest boats there.” And beyond just bragging rights, Frederiksen notes, tournament fishers’ need for speed gets them to deep waters faster, providing the most opportunities to snag the winning fish.

“America is the leader for developing those kinds of boats because they know what people need,” Frederiksen says. “The people who build the boats, they like to go fishing also.” Therefore, they hear the needs of their target clientele at tournaments, he adds, which informs design. 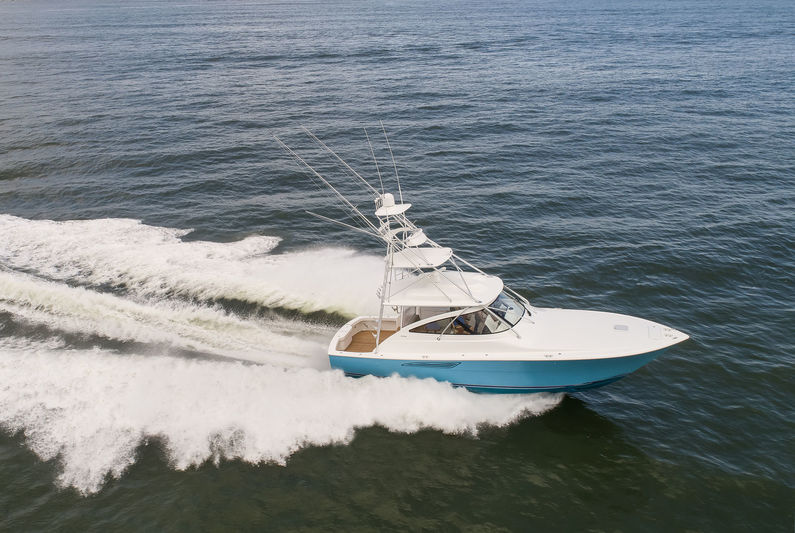 Photo: Viking YachtsViking, for example, is one builder conducting this type of hands-on consumer research, and many consider it to be a powerhouse in the sportfisher market. “Our executives, from Pat Healey down — those guys are very involved in fishing,” says Landry. “The guys on top, in the boardroom, are on the boats, fishing them. That’s how they build a better boat every day.” This means there is always a new ‘best’, and there’s always anglers who want the best. “It’s self-propelling, more or less,” Frederiksen says.

Not every sportfisher owner is a devoted sport fisherman, though. Why? Because sportfishers provide significant utilitarian value and performance without sacrificing luxury and a homey interior, making them a versatile vessel. “It’s a great fishing boat, but it’s also a great cruising boat,” Landry says of Vikings, adding that they have all the accommodations and luxury of a motoryacht. “It’s all top notch. You step on board one of these boats and you are like ‘oh man, I want to live here.’” Beyond onboard comfort, non-angling boaters might choose a sportfisher because, with its performance hull that can handle the chop and approximately 40-knot speeds, it’s a tough, do-more type of boat — a good fit for cruising enthusiasts that like to frequent rougher waters. Of course, a sportfishers’ luxury accommodations are another reason anglers love them. “After they fish hard all day, if it’s an overnight trip, they can just crash in AC comfort,” Landry says.Sportfisher popularity in Europe may be significantly less than in America for a few reasons. The Mediterranean, in contrast with American fishing grounds, doesn’t have the same variety of fish, or the population. And — possibly a more significant reason — the licensing requirements there are much stricter. However, according to Roger Sowerbutts, the British director of Horizon Yachts USA who also has European sport fishing experience, those aren’t the end-all-be-all reasons. “People aren’t down there raving about the sport fishing,” he says. “Over here, people are up at 4:30, baiting. The fishing tournament we started over there, people would show up around 8:30 with a coffee, sit down, then head out at 9:30.” Simply put, the boating style is just different in Europe. It follows the rich heritage of motoryacht design on that continent, much the same as the sportfisher presence in the States is propelled by its origination there.

Generally speaking, Americans love sportfishers because they offer exhilaration and victory in a popular sport — and they offer it in style. With their sleek lines, luxury interiors and powerful performance, even if their design is not your cup of tea, you can’t deny that for the enthusiastic fisherman, they’re the coolest boats in the sea.