DIBS 2007 has grown in all directions, with 722 participating companies, up 53 percent compared to 2006, and exhibitors from 44 countries, up by 16 percent on the previous year.

In addition, the number of boats on display has risen to 330 in total, with 188 in the external area and 142 on the water.

International Boat Industry, the magazine of the global boating market, claimed that the Show has "come of age" in a live report from DIBS 2007, writing that every international exhibitor it spoke to was "unanimously impressed with the professionalism and potential of the show".

This view was widely endorsed by exhibitors at national pavilions at the show on Friday, who all expressed admiration for the high level of organisation and delight at the volume and scale of business transacted. 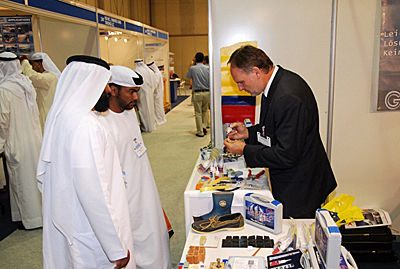 The response from the Australian Pavilion – which hosted a record number of boat builders and marine equipment suppliers from 'Down Under' – was overwhelmingly positive.

The Riviera Group, which builds Riviera Flybridge cruisers, sold five of its boats with UAE distributor ART Marine, at an estimated value of US$3.5 million, fully validating their decision to exhibit.

In addition, the group was able to sign deals with two new dealerships in Qatar and Kuwait, increasing the reach of the group across the Middle East.

Aqualuma Underwater Lighting, of Queensland, Australia, signed deals to supply 40 lighting sets for a total value of US$50,000, while Bladerider International, represented by Australia’s 2005 World Champion Moth Sailor, Rohan Veal, sold five of its advanced craft for an estimated US$60,000. 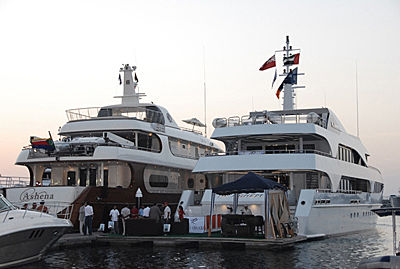 Claus-Elhert Meyer of the German Boat Builders commented: "This year’s show has attracted visitors from across the world and has provided us with important exposure to a number of major markets."

Super-yacht builder Amels, from the Netherlands, recorded a number of key business development opportunities. "Dubai’s importance in the leisure marine industry is increasing, and, at the same time, so too is the Dubai International Boat Show. DIBS is the venue to meet new as well as existing clients."

Companies from within the GCC also expressed delight at this year’s event. Kuwait’s Al Shaya Marine, which brought a range of eight cruisers, speed boats and fishing boats to the show, had sold four boats by Friday, and was anticipating selling its entire inventory by the close.

Sales have been particularly strong to visitors from Kuwait and Qatar, who had travelled over for the weekend.

Bader Alshaya, general manager, Al Shaya, said: "This year’s boat show has been exceptional for Al Shaya Marine. Demand is outstripping supply at the moment, but with the increase in marinas in the Middle East we look forward to selling more with each Dubai International Boat Show."