Following a unanimous board decision, the International SeaKeepers Society is pleased to welcome Dean C. Klevan as its new President and CEO. Klevan joins SeaKeepers following a distinguished career in the financial services industry. Most recently, he was the President of the Coral Gables Trust Company, an institution he helped to found. Klevan also served in senior positions with Morgan Stanley, Merrill Lynch, and Citicorp in the United States and abroad. He brings a business perspective to the challenges faced by a not-for-profit in today’s weakened economic environment. 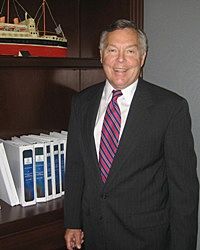 Klevan is an active advocate for ocean preservation. He currently serves on the Board of Trustees of the Guy Harvey Ocean Foundation. He has previously served on the advisory committee of the Pew Institute of Ocean Research and on the Board of the School of Ocean Science at Nova Southeastern University. An avid sports fisherman and diver, he is keenly aware of the crises faced by the oceans today.

Chairman Michael T. Moore stated, “Speaking for SeaKeepers Board of Directors, we are thrilled to bring Dean onboard to lead the Society into a new era. SeaKeepers has reached a critical stage in its development and is poised to play a vital role in the understanding of global climate change. We believe that Dean, with his exceptional leadership skills and unique business expertise, is the person to guide the Society there.”

“We are given the responsibility of being the stewards of the world’s resources for the next generation. None is more sensitive or more important than the oceans and its inhabitants,” Klevan said. “SeaKeepers allows us to gain critical knowledge on the state of our seas and provides this at no cost to the global scientific community. The selfless contribution of its members is a real reminder that a few can make the world better for many. I am excited to join, and look forward to the next generation of the Society.”

Dean C. Klevan is a graduate of the University of Pennsylvania and the Wharton School of Business. He resides with his wife, Christy Starr Klevan, in Coconut Grove, Florida.