Dubois Naval Architects, founded in 1977, has been at the centre of world yacht design for many years. I met up with Ed Dubois, at the Monaco Yacht Show, where his latest project, a 58 metre sailing yacht with Royal Huisman, was unveiled. 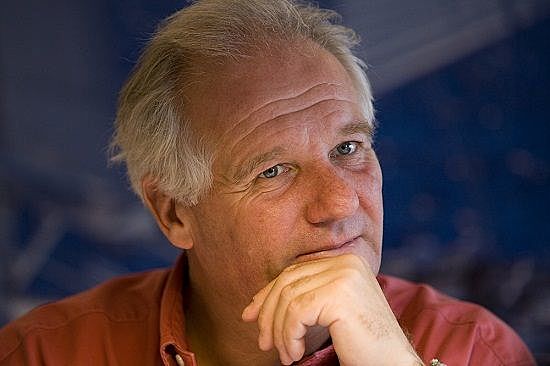 You started your career in the mid-70s as a naval architect. Was styling already part of your job?

Yes, I loved the look of boats from age, well, nothing. It was the look of boats was as interesting to me as the hydrodynamics, both were equally compelling. I always wanted to design boats which were pretty, and I used to design model boats to begin with. I lived in south London, and designed and built model racing yachts which were taller than me, and sailed them around the pond in Kensington Gardens, which was built in the Victorian era for model boat racing. It’s huge. So I used to sail in there, and it’s only three foot deep. 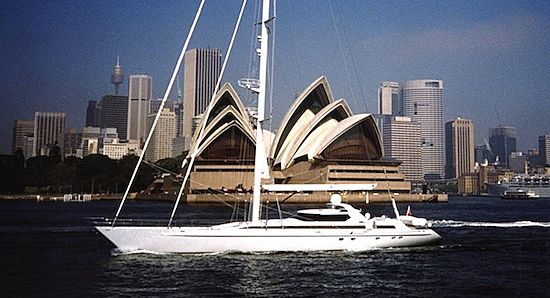 So I was designing model boats when I was seven, eight, nine years old, and didn’t actually sail or get in to a proper sailing boat until I was ten. So it was a compelling thing. I’ve got three sisters, and they used to call me the ‘boat bore’. We’re a musical family. My father was a pianist, and he made his children into musicians. There was no boating background, I don’t know how I got into it. My mother was in the navy in the Second World War - she could actually speak to me in German Morse code because she was listening to German submarines. But she thought boats were a good thing, and I think she encouraged my interest.

What made you decide to set up your own company?

I was desperate to design boats which won the major offshore races. Olin Stevens was my hero as a designer, and I knew he’d done it and I just thought it was the natural thing to do.

When did you expand it, bringing the brokerage part into the business as well?

That was much later, that was 2001. That wasn’t really something I necessarily wanted to do, but we were encouraged to do it by some of my repeat clients who said, you know, you design the boats, you see them being built, you know them. I said, yes, that may be, but I didn’t really want to do brokerage. Then we found ourselves helping the brokers sell the boats I had designed as a duty to our repeat clients. We were spending a lot of time helping, and actually it was getting in the way of designing boats, so we decided to create Dubois Yachts Ltd, the specialist Dubois charter and brokerage company, a sister to Dubois Naval Architects. 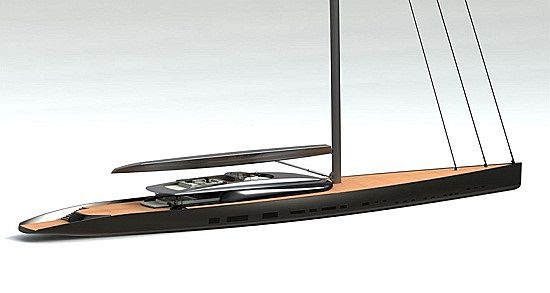 Is there not a conflict of interest, being a designer, and a broker?

I’m not – I’m a designer, I’m not a broker. I have a broker who manages Dubois Yachts and it’s run independtly of the design studio. We’re not competing with the other brokers, we’re working hand in hand with them, and if they have a boat which I designed and they want some help technically, we can do that. The brokerage business was very successful in the boom years between 2001 and 2007, and then it clipped away. We kept it going as a service to our clients, and look forward to building it up again in the coming 12 months.

Looking at your designs, you can always tell when a yacht is by your hand. Is that something your clients ask for?

Our first superyacht was Aquell II in 1986, 1987, and that was a very different look at the time. We developed that style because I liked it, but it happened to strike a chord with our client base too. It is important to me that people recognise our style. I see the design of Dubois yachts as architecture on the water.

You also don’t want to do interior design?

I don’t want to do interior styling. But we are responsible for the interior space planning on Dubois yachts. The styling, I’m not really trained to do that. I might do it later, I don’t know, the industry already has many interior experts..

You’ve built so many sailing yachts. Does that help you when you’re designing a motor yacht?

With space planning and styling. Motor yacht hulls are simpler than sail boat hulls, but they nevertheless are a lovely thing to draw. 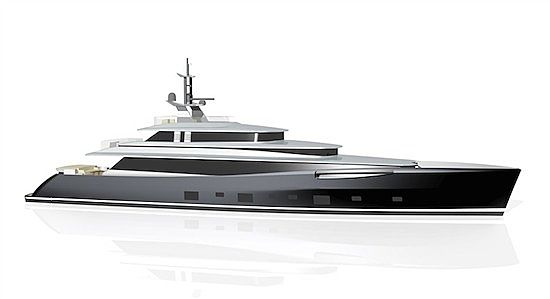 You’ve just done Como and there is another 46 metre under construction at Feadship, project Mandarin. A while ago there was also a 90 metre which you released?

That’s right, that’s for a potential client who has at the moment gone on hold, so that is not happening yet.

I can imagine that a motor yacht that size with the volume and the extra work that creates, has a great impact on your studio?

Not really. No more impact than doing a 50 metre. It’s a space planning exercise and as you get bigger, yes there are more opportunities, but I don’t think it occupies too much more time.

There’s been talk for a long time of a 100 metre sailing yacht you have designed. I don’t think the sale has been signed yet?

No, it hasn’t. The owner is well-known to us, he has paid for all the research and development and it’s a big project. He’s waiting for the right time. He’s quite able to press the button himself, but there are other issues involved there. It may well happen towards the end of this year.

Is a boat that size with a rigging that size still something you would encourage clients to do? Does it not get too big?

In 1987 everybody told us we were crazy doing a boat that was 37 metres long, which was Aquel II. Now 37 metres is considered small to most 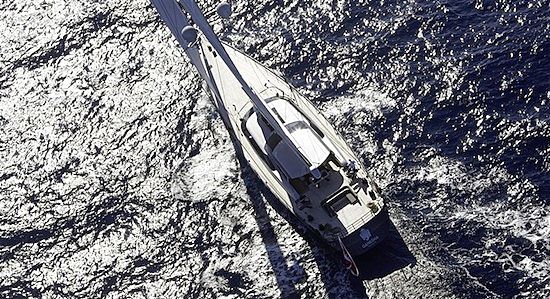 You must receive a lot of invitations to sailing events around the world. How do you decide which events to attend?

The regatta scene has exploded, it’s true, I remember doing the St Barths Bucket in the year 2000 and there were just four boats. It was one race around the island, and in fact one boat went around the wrong way, but they gave him a prize for originality. It was so relaxed and charming. Now as you know its 40 boats plus, the boats are becoming more and more competitive. I follow the regatta scene because I enjoy it, my roots are in racing. Some people with some justification say to race these big boats is slightly crazy, nevertheless it’s there so we have to do it. I love the competition. We’re all alpha male types, and we all want to win. 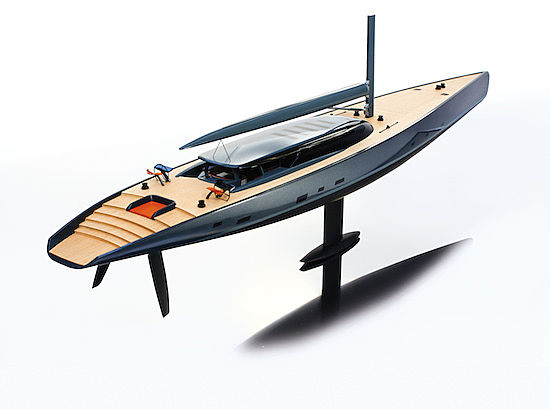 Your latest project at Royal Huisman reminded me of Aglaia with the curved windows. Was that something the client had seen and liked? 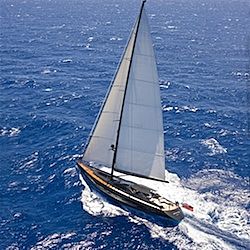 Aglaia was a big statement, and that was what that particular client wanted. I put my own take on that, the client has given me free range to do that, but the real thing with the new design we’ve done with Huisman is we’ve put an inflected sheer on it.

Think of a bridge. The centre will always be higher, not lower, so the bricks are compressing as you put the load on it. It’s the same with the molecules in whatever material you’re using. I did just that with the boat I was designing in June this year. You’re always worrying about longitudinal strength, particularly when they’re jumping off waves and you’re suddenly supported by the ends, with nothing in the middle and there’s 100 ton of keel and a mast pushing down. It’s a massive load. Then you make it worse by cutting out big holes in the deck to put the tenders in and so on, you’re taking all of that material out of the deck which is where you want the material. So I thought we must fight this. Aglaia needed a lot of metal to add strength. When I ran the calculations on this boat with the inflected sheer, there was a 12% increase in stiffness with no more material and no more weight. We were even able to take some weight out of the structure by doing this, and still keep enough stiffness.

What did the client say when he saw it?

The client just loved that look. He wanted us to design the boat, and we had a design underway. But inspired, I went into the studio one Sunday afternoon and altered the sheer line. I presented that design to him a week later and he said, that’s it. That’s when he signed the contract with Royal Huisman. 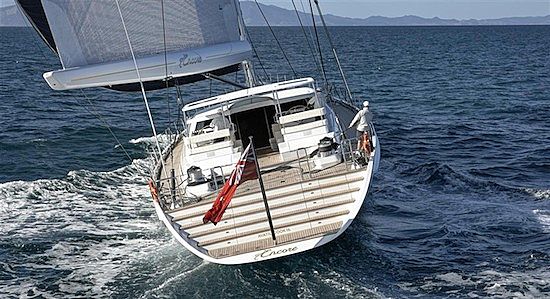 What can we expect from you in the future?

More. We’ve got some new talent in the team - two young guys.

I’m no longer young but I’m fit and healthy, I’m excited about bringing up a younger team. I’ve also got Peter Bolke in the studio who has been with me for 22 years, he’s fantastic. He has charge of the operation under me. So more of the same in the future, and bigger and better.

You are the name of the company. Have you ever thought about what happens if you retire or sell the company?

I don’t want to do that, but of course those possibilities are always there. I’m not planning on doing that just yet, I love it. I’ve been doing it since 1975, we launched the first boat on May 1st 1976, so that’s 38 years ago.

It’s my life. There are plans for the future of Dubois and I’m not planning on disappearing any time soon.