Earlier this month, I visited Sunrise Yachts in Turkey, where I met up with Guillaume Roché, CEO at Sunrise Yachts. We discussed his current orders, the importance of a Turkish Shipyard Association and his plans for the future. 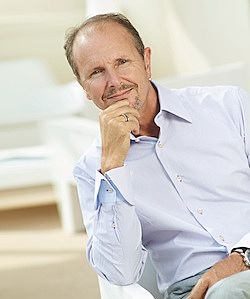 Guillaume, I was here in September 2012. Have things changed for you over the past two years?

A lot of things have changed. We are obviously very busy with 4 large yachts under construction, and we have also signed one more project. Project Skyfall is a 68 metre superyacht that is going to be quite a substantial project for us, and quite prestigious as well. We have built a new facility and grown our engineering office as well as construction teams. We just launched our second 45 metre and we’ve also had a few refits, so it’s been pretty good since you were here last.

We see that a lot more contracts are being signed this year, including Skyfall. Do you feel the market is picking up?

How many facilities do you now have in Antalya?

We’ve built this new building quite rapidly. From London we signed a 63 metre, the first one, which was 4 years ago. We knew that we couldn’t fit it in our initial facility so we built this new facility a few hundred metres away, with direct access to the sea. Facility number two now accommodates three boats up to 70 metres. We built it from scratch again with roughly the same surface area but with a much higher building. We also just recently purchased a third facility which will be dedicated to workshops and storage, because we need a lot of space - we currently have 4 boats under construction and a couple of other refits. This amounts to more than 30,000 m2 of facilities inside the Free Zone. 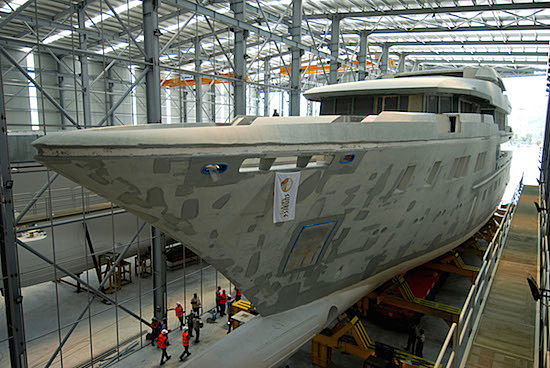 The first 63 metre was signed 4 years ago. How is she progressing?

It’s going well. We are launching it probably early February or the end of January. We’re also planning to launch a boat every 6 months from that moment on; we have the 57 metre, the second 63 metre and, of course, the 68 metre in 2017. 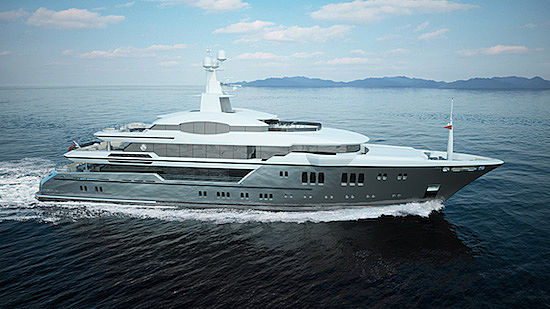 Originally you started with two 45 metre projects. You then had several larger projects, including a 57 metre, a 63 metre and a 68 metre. Are you now more focused on the 50-70 metre market?

It’s true, the boats are not going to get any smaller. We see more demand for 60+ metres - let’s say around 80% of the demand. We’re occasionally getting demands for above 70, but we’re not particularly keen about going down that road for many reasons. The main one would be infrastructure. We don’t have the capacity to build more than 72 metres. We would probably have to create the infrastructure to do that or do a joint venture with someone else. We’re trying to stay underneath that, but as things go, boats are getting bigger. There is an incredible order book of boats in that size nowadays. Ideally we are going to stay in the 50 to 70 metre range. 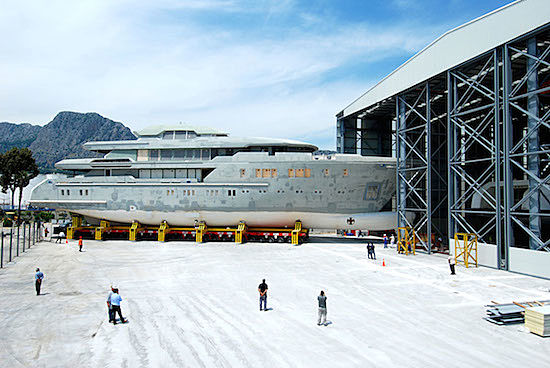 What is the ideal number of projects you want to have at the same time?

For us in the terms of a shipyard, I would say a minimum of four and maximum of six is good.

So it wouldn’t be a problem for you to sign two more contracts at this stage?

Right now we have one slot open. We have launched the 45, so we’re already planning for a 50+ metre boat now with a client. After launching the 63 next year we are going to have another slot.

Would you consider building boats on speculation? 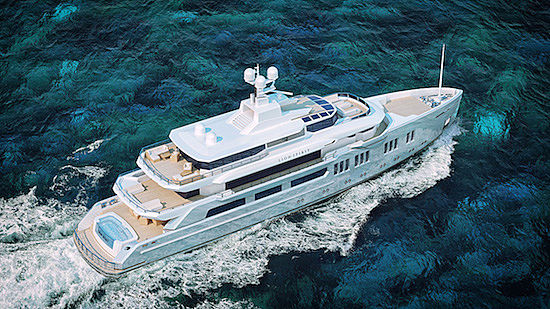 Yes, definitely. What we have already planned to do is to maybe start a second 68 metre hull after the first one. If by spring next year, we haven’t hooked up with a client, we would definitely build a hull and superstructure on speculation.

We see the demand and we also realised that nowadays, especially in the size we are talking about, very few people want to wait three years to get a boat. Even though three years is still a really good time for a boat of 60 plus, we realised that the best way to enhance our capacity is to sell up and to offer shorter delays. Therefore we have to start investing in engineering, hull and superstructure.

You also have a 34 metre explorer project with the hull and superstructure finished. Is that still a size you would like to focus on?

No, that was something that was originally started as a joint venture we had with another company. This is something we want to sell and obviously sell either as it is or to complete, but we don’t want to particularly pursue that size range, for very simple reasons. We now gear for much bigger boats and our overheads are very different. 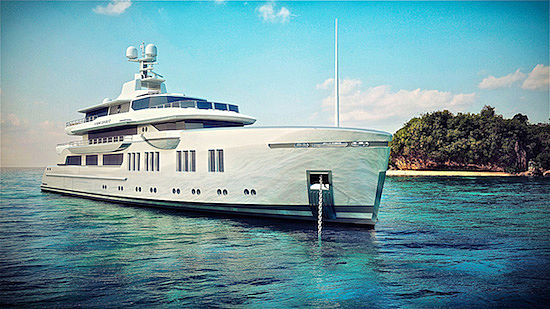 You have two American owners now. Do you see a strong demand from the United States?

Absolutely. This is really where the big changes are happening. The Americans are really back. On top of that they don’t have the same prejudiced ideas about Turkey that Europeans do. Therefore they are much more open to explore building in Turkey.

I think Americans are very pragmatic, in many ways, and they want quality but they also want value for money. I think this is where Sunrise Yachts in particular has the strongest appeal. We are, in my opinion, the best value for money in the world in terms of the quality you get for the money you spend. I think Americans are the ones who pioneered all the Taiwanese shipyards, looking outside the US in order to get products done. I would say that still a good portion of the very well established European yards have American owners. They are still looking for high quality, but I think nowadays, with this new economy and this new trend, they are also looking for value.

I have been to a few shipyards in this area and it seems like that the general quality here has gone up as well, not only from Sunrise Yachts but also from Sarp Yachts, who have been investing a lot and taking boat building very seriously. Is that a trend you see in Turkey?

Yes absolutely. I think there are now a number of really good people who are dedicated to quality and to equalling the level of quality you find in Europe. We are very happy that all these people are committed to doing that and it has raised the game in Turkey for sure. People like Proteksan have been the main pioneers, creating this awareness of Turkish quality. We still have very disparate levels of quality in Turkey but I would say that there are ten good shipyards in Turkey that are very dedicated to European standards and competing with the best. 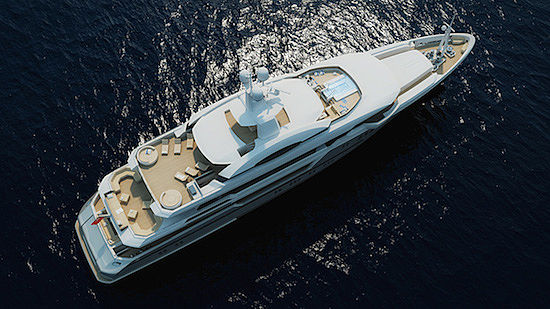 Is it a challenge to find good employees as a growing company?

I think it is a big challenge for any company in any country to find good employees. I think it is a bit more challenging in Turkey for the very simple reason that the high-end yacht building industry is still very new compared to Europe. We are competing with shipyards that have dozens of years of experience. Our industry, as you described it, with this new quality, is maybe 15 years old. We are still suffering a lack of this massive infrastructure that is needed to produce a lot of high quality boats. We still have to draw from a pool of inexperienced people and then train them, which is a very big job.

So, the answer is yes and no. Yes it is difficult to find good people but I think that is a common thing anywhere. To find specialist people for certain specific tasks is a bit of a challenge. 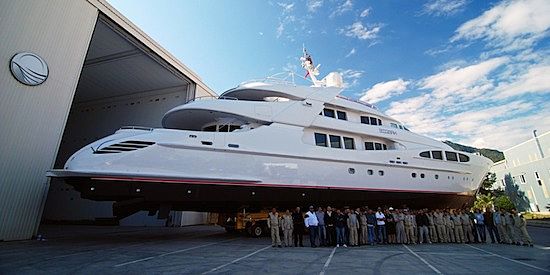 How important is the refit business for you?

It’s kind of growing in Turkey. I mean there has been refits across the whole of the Istanbul area, and Bodrum maybe, as a real beneficial business. Here in Antalya it is a very new thing. We are in the process of negotiation with the Free Zone for infrastructure that will allow us to grow in the refit business. I think it is an essential element for the future of all the shipyards in the Antalya Free Zone. Refits are very good to fill the gaps between new build constructions. 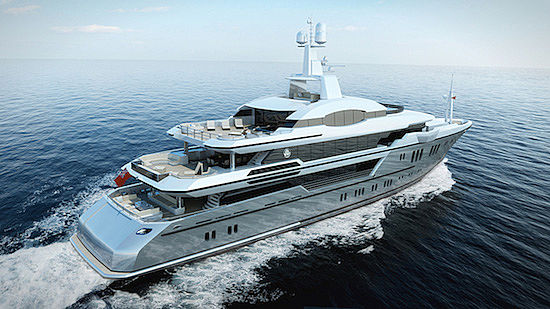 Do you think it would be a good idea to have a Turkish shipyard association?

It’s something that will happen sooner or later in the end, because sooner or later the inevitable use or advantages that it will bring will finally be noticed by the industry players. Yes, I think there is a desperate need for one. 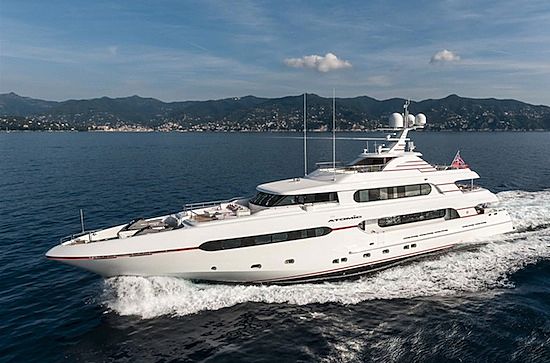 Now you have completed a 45 metres and, soon, a 63 metre would you be interested in joining Sybass?