It is a great pleasure for ISA – International Shipyards Ancona to announce the launching of a new masterpiece, the steel-aluminum displacement motoryacht named Axioma the sixth 47 meter of the range. 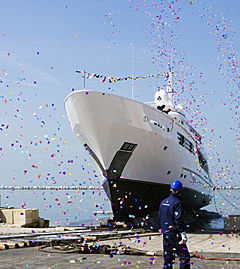 With a private party agreed with the Owners, last March 25 at 12.30 Axioma slowly starts sliding down the slipway and, as soon as she touches the water loads of balloons and coloured streamers are set off colouring Ancona sky and touching the emotions of the crowd.

In front of the stand manned with the owner and his family, some of his friends, ISA managers and some business partners, many friends but above all ISA people and their families, longing to see the boat they worked on for some 20 months go in the water, attending to show their respect to the fulfilment of the promise ISA made 2 years earlier.

Walter Franchini designed this new work of art for the exterior and Luca Dini for the interiors. Last but not least, the role of ISA technical department and production department for the works coordination and execution was fundamental.