ISA has announced the sale of its first ever ISA 140’ (43.63 meters) composite superyacht, which combines high performance with low consumption. Besides a traditional propulsion system, consisting of two marine diesel engines driving two Rolls-Royce Kamewa waterjets through reduction gear-boxes, which allow the yacht to run at the maximum speed of 32 knots and a cruising speed of 26 knots, the new ISA140 is equipped with a hybrid propulsion system supplied by Siemens.

The hybrid system allows for high speeds with two main engines on, the electric power is generated by the two shaft generator on gearbox. In this mode, the two diesel generators are off.

Low speed navigation, at 8 knots, is possible with the two main engines off. The two waterjets are powered by the two electric motors connected to the gearbox. The two diesel generators also supply power to the electric users. The total fuel consumption is 90 l/h for a range of 2600 nm. Consumption drops from 55 l/nm at max yacht speed to 11 l/nm with electric mode on. 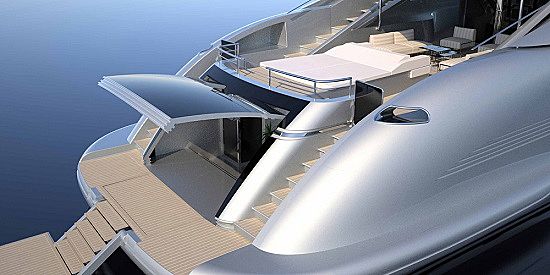 Running the yacht in hydrid mode, also result in a much lower noise level in the interior. It is expected that at 8 knots guests experience the same sound levels as on a sailing yacht. Furthermore, there is a drastically improved redundancy. Should the generator set fail, the two shaft generators will generate electric power. If the main engines fail, the two generators can still power the propellers.

The composite parts of ISA 140, such as the hull, the deck, the superstructure and the accessories, have been built with vacuum assisted resin infusion (VARTM). The hull of the ISA 140 is one of the largest ones ever made on a single mould. The result is a product with superior features in terms of lightness and stiffness.

The yachts exterior is designed by Andrea Vallicelli. Strong diagonal lines run from the sundeck to the stern, mirroring the flair of the distinctive sweeping staircases. With her 5 cabins, the ISA 140 can accommodate 10 guests. The interior design comes from Nuvolari & Lenard Design.