The latest development from the design and naval architecture bureau of Ivan Erdevicki, Inc., is Adamantine an 86-metre six-deck superyacht that sparkles like a Diamond on the sea. The design is a unique, well-proportioned boat, which combines the naval-style strength with elegance and refinements of a superyacht, giving the vessel an original appearance, powerful image and a modern look that should appeal to clients looking for something unique and special, perhaps someone’s lifetime project! 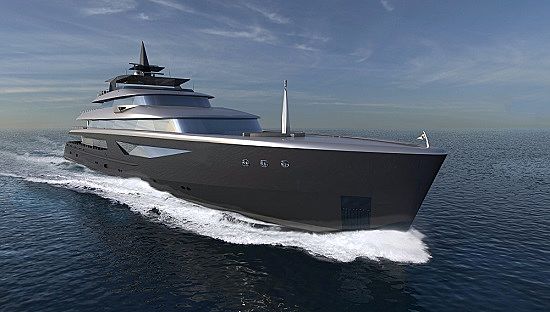 Nobiskrug Shipyard in Germany recently spotted the 86-metre Adamantine design as refreshingly new and unique, and decided to join forces in promoting the yacht at the 2013 Monaco Yacht Show.The streamlined hull and a diamond-like faceted glass superstructure impressed them, which make an imposing and powerful statement. They would like to build the boat in their shipyard in Germany where Nobiskrug has currently two custom-build projects under construction, a 74m motor yacht and a prestigious project well above 100m. 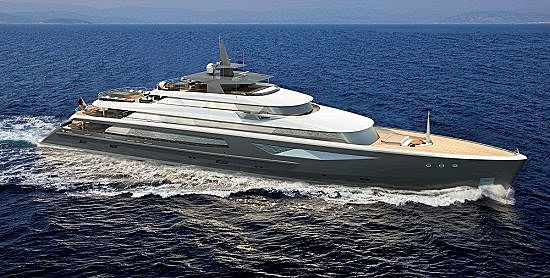 Ms Susanne Wiegand, joint MD at Nobiskrug said about Adamantine: "The design is something innovative, the way it uses light as the yacht’s image builder contrasting with the minimalist lines of the powerful hull, both well suited to our construction technology”.

This is a sleek design with a powerful hull, beautifully proportioned, full of light and panoramic views but also offering privacy and seclusion when desired all achieved with an air of exclusivity, a high class boat with a style – a yacht that makes a statement just by its presence. Ivan Erdevicki the designer commented: “The design has been long in coming and the objective was to create a true super-yacht of elegant proportions, spacious and comfortable for living and pleasure, yet powerful, strong and above all a safe yacht and, I believe, I have succeeded on all counts. She is a diamond!” 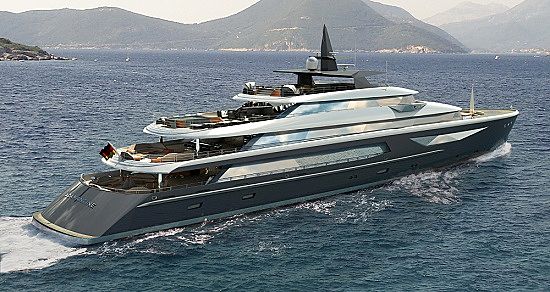 The hull design is characterised by a pleasing shear line, smooth hull planes with gentle chines, a slightly downwards angled bow and a stylish rubbing strake running from before the mid-ship to the stern, giving it a powerful profile from every angle, a masculine but not overaggressive look. The horizontal lines of interlocking tinted windows offset by a brilliant white superstructure contrasts with a matt black or Royal blue of the hull, which altogether draw the eye to the yacht as whole and not just sparkling windows.

Erdevicki has focused on giving the yacht an image that stands out with a special feature not seen on yachts to this extent before. Adamantine’s faceted, reflective glass windows and panels have been carefully shaped and angled to form an interlocking chain of faceted glass along the superstructure with the forward hull windows also mirroring this faceted pattern. The result closely resembles the surface of a cut diamond, reflecting the light and colours, giving the superstructure a very striking appearance. In contrast, the front part of the superstructure has been rounded smooth, creating a sleek and streamlined panoramic fore section, whilst the stern section offers a spacious, semi-sheltered deck area partially enclosed in the faceted glass.

The owner’s stateroom suite, arranged over two decks, is completely self-contained with the stateroom, heads, closets and office on the main deck and a panoramic private lounge on the upper deck reached by a spiral staircase from the stateroom. The private lounge will offer 330˚ panoramic views with a direct access to the private forward deck. There is plenty of space to include a sauna, private gym and even a private dining room. Also on the upper deck are two VIP staterooms but with a separate access from the lobby. There are four more guest staterooms, two on the upper and two on the lower deck; a very individual arrangement respecting the privacy and giving a sense of exclusivity. The captain’s cabin is behind the wheelhouse on the top deck, whilst twelve crew cabins are on the lower deck separated from the main accommodation. All deck levels are served by a centrally located lift and beautifully designed interior includes luxury entertainment amenities such as a dedicated cinema, a full size gym, sauna and a steam room. 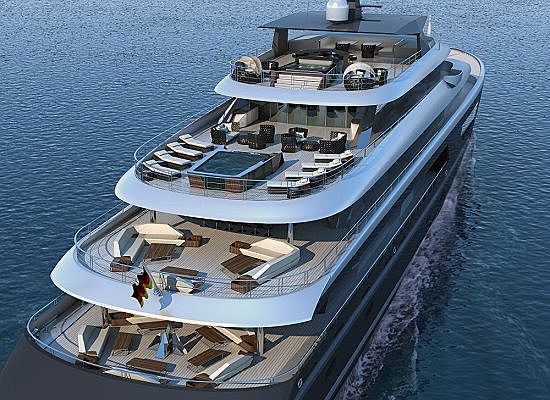 A choice of two helipads is proposed for the upper deck and/or forward deck, whilst Jacuzzi and/or a swimming pool are an integral part of the design. Aft of the vessel is the beach club based on the hydraulically extendible transom with direct access to the storage room and boathouse holding two full-sized tenders, jet-skis and other leisure equipment. The beach club is accessible by stairs from the main deck with an optional swimming pool. Each tender and the jet-skis are launched through the port and starboard hydraulically operated side doors respectively, offering uninterrupted enjoyment of the beach club.